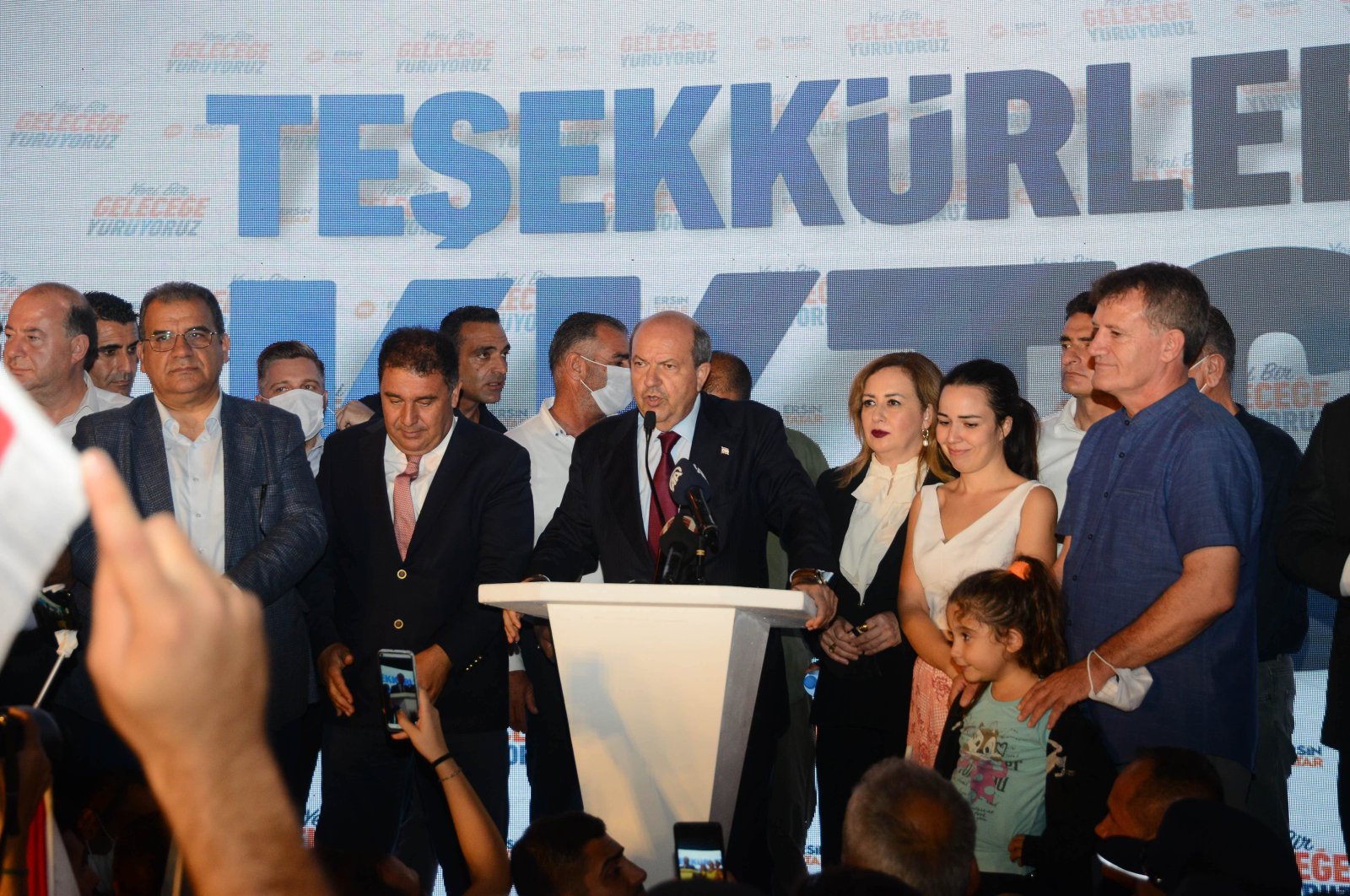 President-elect Ersin Tatar speaks after winning the second round of presidential elections in the Turkish Republic of Northern Cyprus (TRNC) in Lefkoşa on Oct. 18, 2020. (AA Photo)
by Daily Sabah with Agencies Oct 18, 2020 6:59 pm
Edited By Nurbanu Tanrıkulu Kızıl

UBP's candidate Ersin Tatar, who served as the prime minister of the Turkish Republic of Northern Cyprus, has given a message of unity and prosperity to the Turkish Cypriot people, as he said he was determined to seek a solution to the decadeslong problem on the island

President-elect Ersin Tatar pledged to move the Turkish Cypriots forward and fulfill his campaign pledges after winning the second round of the presidential elections in the Turkish Republic of Northern Cyprus (TRNC).

Ersin Tatar, who ran as the candidate of the National Unity Party (UBP) and was the former prime minister, has become president after winning the second round of presidential elections with 51.74% of the votes against rival Mustafa Akıncı, who obtained 48.26%, according to the unofficial count.

Narin Ferdi Sefik, the head of the Supreme Committee of Election, announced that Tatar won the second round of the public vote.

His supporters poured into the streets after the announcement of unofficial results, as they celebrated Tatar's victory.

In his first statement issued after the elections, Tatar said he extends a hand of peace and friendship to the Greek Cypriot people, as he thanked Turkish Cypriots for their support.

"I will keep all my promises and will be the president of everyone and act in a unifying, conciliatory approach and stand with our people," Tatar said, as he pledged to work hand-in-hand with all institutions to enhance living standards on the island.

Tatar also said he was proud to cooperate with Turkey and condemns those who criticize Turkey, which has provided full support for the Cypriot cause and sacrificed its people during the war, for the sake of election propaganda.

Tatar also said he is ready to sit down at the negotiation table with Greek Cypriots to find a solution to the decadeslong issue "based on facts."

"I sincerely believe that solving the Cyprus issue will also enhance Turkey-Greece relations," he said.

In his first statement after the elections, Akıncı said the results have marked the end of his 45-year political life, as he said he wanted to speak with Tatar to congratulate him, but the latter's phone was busy.

"We've been through an abnormal election period. I congratulate Tatar and wish him success. I also congratulate those who played a role in creating these results. These results have marked the end of my 45-yearlong political life," Akıncı said.

The elections had been delayed as a result of the COVID-19 pandemic.

Akıncı, the fourth president of the TRNC and in office since 2015, supports a federalist solution on the island of Cyprus in line with United Nations' initiatives, and such a resolution could be efficient in solving other regional problems too, particularly tensions in the Eastern Mediterranean.

Tatar, on the other hand, seeks a two-state outcome, expressing a stance more in line with that of Ankara, compared with Akıncı and Erhürman.

Although he does not directly oppose a federalist solution, Tatar believes that tying hopes to such a plan is not realistic, considering the TRNC's complex past with the Greek Cypriot administration.

"I congratulate Mr. Ersin Tatar, who has been elected as the president of the Turkish Republic of Northern Cyprus, on behalf of myself and the Turkish nation," Erdoğan said on Twitter.

"Turkey will continue to spend all efforts needed to protect the rights and law of the Turkish Cypriot nation," he added. Later on Sunday, the president called Tatar to congratulate him on his victory, as he invited him to visit Ankara for his first official trip abroad.

Turkey's Foreign Ministry also congratulated Tatar in a written statement, saying: "It is announced that Prime Minister Ersin Tatar won the (presidential) election according to the unofficial results. We congratulate Mr. Tatar and wish him success in this supreme post he is elected."

It added that the results reflect the free and sovereign will of the Turkish Cypriots.

"The strength of the Turkish Cypriots stems from their ability to maintain their unity and solidarity within the framework of social solidarity and democracy principles," it said.

The ministry also voiced pleasure that the presidential runoff held on Sunday in the TRNC showcased the exemplary democracy of the country and the political maturity of its nation.

"We will continue to work in close coordination with all the institutions of the Turkish Republic of Northern Cyprus, to support the sovereign equality of the Turkish Cypriots – the common owner of the island – and its legitimate rights and interests in the Eastern Mediterranean under all circumstances, and to fulfill our conventional and historical responsibilities with precision and determination," it noted.

"I would also like to extend my thanks to Mr. Mustafa Akıncı for serving as the president," Kılıçdaroğlu said, adding that he hopes the results will benefit the Turkish Cypriot people.

Praising the success of elections in the TRNC, Vice President Fuat Oktay said the country was celebrating democracy after holding transparent elections, as he congratulated Tatar and the Turkish Cypriots.

In a statement, Greek Cypriot leader Nikos Anastasiades said he congratulates Tatar and expects to hold a meeting soon to “get to know each other.”

Anastasiades also said he would positively respond to Tatar’s call to solve the decadeslong problem and was determined and ready to solve the Cyprus issue in line with U.N. resolutions, U.N. Security Council (UNSC) decisions and EU principles.

“I would like to hope that Mr. Tatar will also display the same will,” Anastasiades said.

Noting that they need to look forward after the elections, Petsas said the Greek government hopes that the newly elected Turkish Cypriot president would come to the negotiating table to solve the issue.