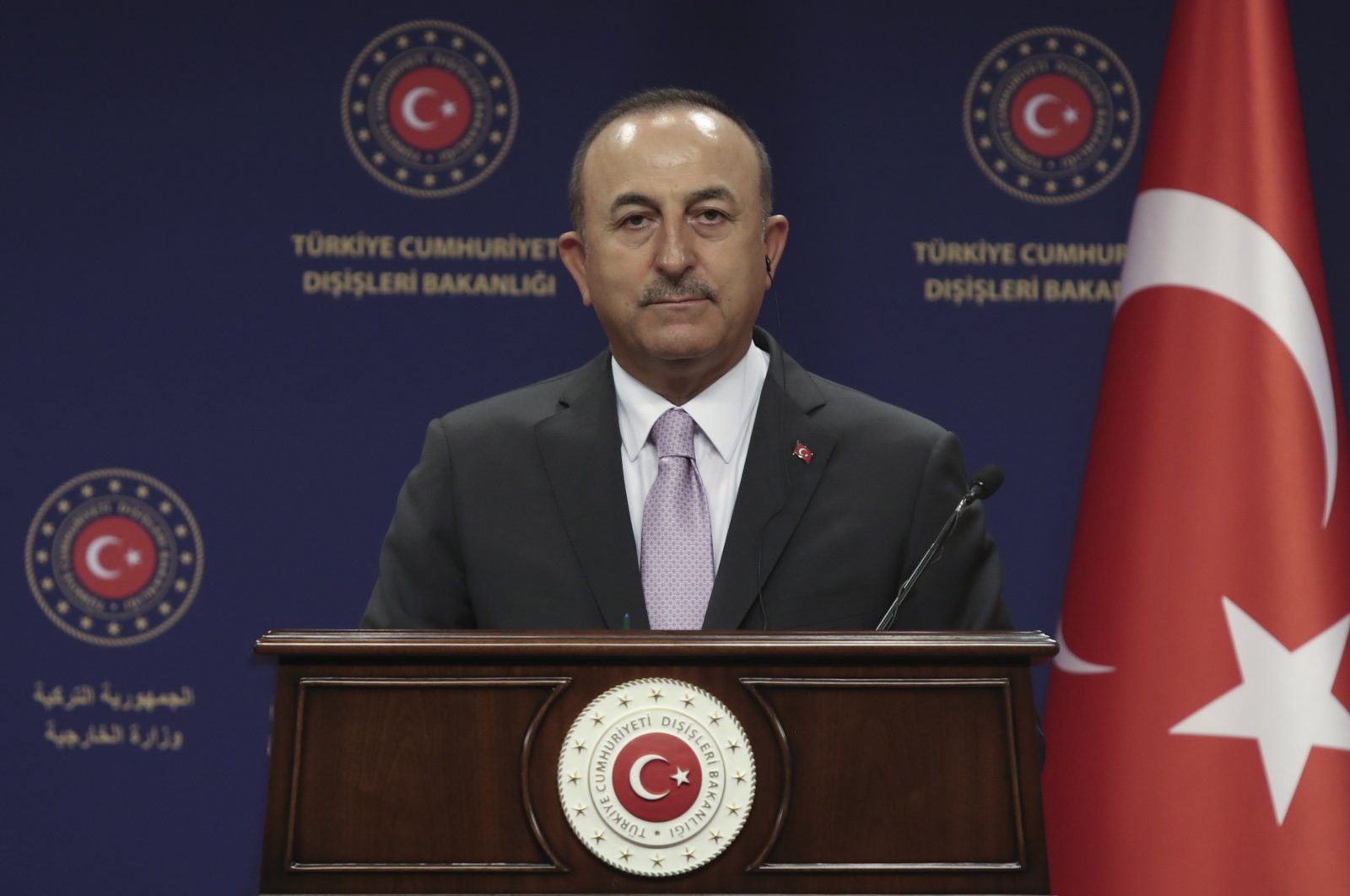 Turkey's Foreign Minister Mevlüt Çavuşoğlu speaks during a news conference with Jean Claude Gakosso, Minister of Foreign Affairs of the Republic of Congo, in Ankara, Sept. 8, 2020. (AP Photo)
by DAILY SABAH WITH AGENCIES
Sep 11, 2020 10:46 am

Turkey's foreign minister said Thursday that his country expects the European Union to act as an "honest broker" in the Eastern Mediterranean region.

"If you are part of the problem, how can you mediate between Turkey and Greece, or between Turkish and Greek Cypriots?" said Foreign Minister Mevlüt Çavuşoğlu while addressing the European Parliament's Committee on Foreign Relations via video link from Senegal.

Çavuşoğlu said the EU has assumed the role of a judicial authority defending the claims of one side in the Eastern Mediterranean and its position was unjust and not in line with international law.

He noted that the European organization and Ankara were not on the best of terms, but this should not stand in the way of establishing a channel for sincere dialogue.

Critical of the Greek Cypriots' ascension to the EU in 2004, he further noted that Greece and Greek Cypriots had poisoned Turkey's strategic relations with the EU by pulling the latter into its maximalist agendas.

In addition to Greece and Greek Cypriots, according to Çavuşoğlu, other countries such as Egypt, Lebanon, France and even an outside actor – the United Arab Emirates (UAE) – have recently sought to forge alliances isolating Turkey and the Turkish Republic of Northern Cyprus (TRNC) in the region.

He underlined that Ankara supported the mediation efforts by Germany and the EU, whereas Athens did not favor dialogue and had adopted a negative approach toward the de-escalation bid of NATO Secretary-General Jens Stoltenberg.

Turkey, without any preconditions, is ready to engage in dialogue but will set its own terms if Greece comes up with demands, said the country's top diplomat, adding the EU had maintained a neutral stance regarding maritime jurisdiction disputes experienced by Spain, Ukraine, Slovenia and Croatia.

Çavuşoğlu concluded that Turkey did not seek any escalation in the Eastern Mediterranean and favored a peaceful approach and President Recep Tayyip Erdoğan himself had instructed the military vessels protecting the Oruç Reis – a Turkish-flagged energy research vessel operating in the region – not to be the first side to open fire, adding they would stand firm to protect the ship should Greek ships attempt to harass the research vessel.

Turkey – the country with the longest coastline in the Eastern Mediterranean – has sent out drillships to explore for energy on its continental shelf, saying that Turkey and the TRNC have rights in the region.

Dialogue for fairly sharing these resources will be a win-win for all sides, Turkish officials say.

Çavuşoğlu also shed light on how Turkey and France were not on the same page on Syria, Libya and the Eastern Mediterranean.

He said Turkey considered France its ally, but the French policy toward Turkey had changed following Ankara's military operation against the YPG, the Syrian offshoot of the PKK terror group.

"France is supporting the PKK to divide Syria. This plan was ruined. That's why France became very angry with us," Çavuşoğlu said, adding there were times when both countries had the same policy on Syria.

"I attended many meetings of the International Syrian Support Group," he said.

"We even criticized the United States for being too flexible. We were against Russian policy there."

He condemned French President Emmanuel Macron's statement earlier in the day calling on the EU to be tough with Turkey.

Macron on Thursday hosted the leaders of six other EU states, including Turkey's regional rival Greece, for a summit in Corsica in the hope of finding common ground ahead of the next EU summit this month.

Showing again his biased stance against Turkey under Erdoğan, Macron said before the summit that the NATO ally was no longer a partner in the Eastern Mediterranean and that its people "deserved something" different from the way the government currently behaved.

France has strongly backed Greece in the growing standoff with Turkey over hydrocarbon resources and naval influence in the Eastern Mediterranean, which has sparked fears of more severe conflicts.

After talks with the leaders of Italy, Malta, Portugal, Spain, Greece and the Greek Cypriot administration in the resort of Porticcio outside the local capital Ajaccio, Macron adopted a slightly milder tone, saying the leaders wanted to reengage in dialogue with Turkey "in good faith."

But the final statement of the leaders made clear that sanctions were on the table if Turkey failed to end its "confrontational actions."

"We regret that Turkey has not responded to the repeated calls by the European Union to end its unilateral and illegal activities in the Eastern Mediterranean and the Aegean Sea," the communique said.

"We maintain that in absence of progress in engaging Turkey into a dialogue and unless it ends its unilateral activities, the EU is ready to develop a list of further restrictive measures," the leaders said, adding these could be discussed at the European Council on Sept. 24-25.