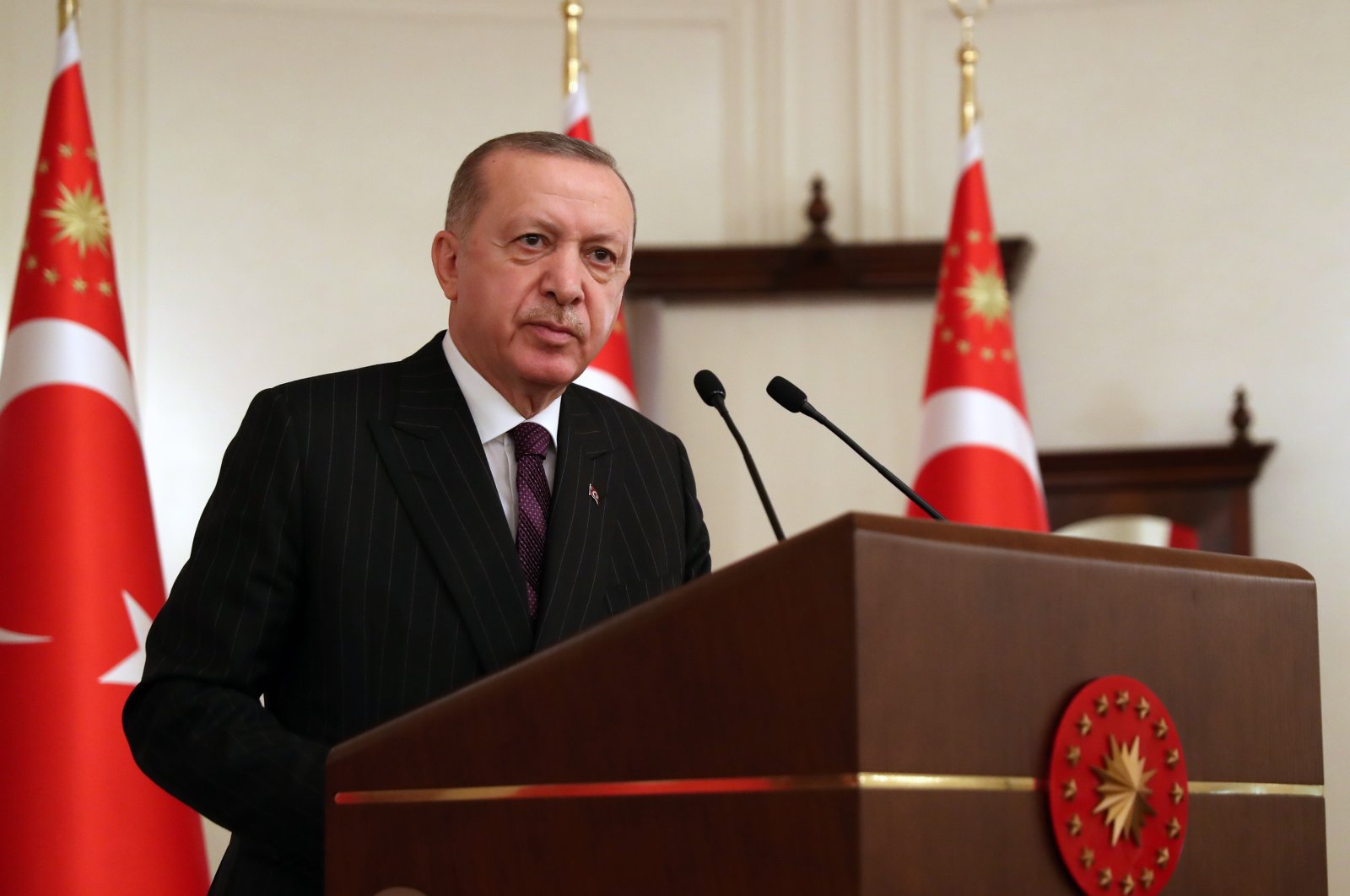 Turkey is ready to set a "positive agenda" with the European Union, including a long-term perspective, President Recep Tayyip Erdoğan said Tuesday, underlining that the relations must get back on track.

"The EU admitting Turkey as a member would be an ontological choice for the union and would help bridge the gap left by the U.K.'s departure," Erdoğan said during a meeting with EU ambassadors in the capital Ankara.

"By taking initiatives in the Middle East, particularly in Syria and Libya, Turkey contributes to the EU's security," Erdoğan said, underlining Ankara's efforts for the refugees, as well as make way for peace in Libya.

Previously, Erdoğan on Saturday reiterated that Turkey prioritizes the EU in its agenda and sees its future in Europe. Turkey hopes to start afresh with the bloc in the new year, Erdoğan said in a statement, adding that interactions with the EU in 2020 were unproductive due to the artificial problems created by certain EU members.

Other than the bilateral ties between Brussels and Ankara, four topics are expected to dominate the agenda: updating the migrant deal with the EU, visa liberalization for Turkish citizens, updating the customs union with the EU, and Turkey's proposal for an Eastern Mediterranean conference.

Turkey remains determined regarding its reform agenda and seeks support from the European Union in making its new initiatives a reality, Foreign Minister Mevlüt Çavuşoğlu said Tuesday in his opening speech at the meeting.

"We see our future in Europe and would like to build this future in cooperation with the union."

Referring to Turkey's rooted ties with the EU, the foreign minister said over the years, Ankara and Brussels have developed relations in almost every area imaginable, from education to art, diplomacy to the economy and today have become "irreplaceable" for each other.

"Our mutual dependency on each other in areas such as energy and defense have increased gradually," he said.

"Turkey is in Europe. And Europe is a part of Turkey's destiny. And vice versa," the foreign minister underlined.

"If we act together, we may make a change in all fields. As Turkey, we are ready to take this step," Çavuşoğlu further stated, adding that Ankara is fully committed to its membership process with the bloc.

"Turkey was subjected to serious injustice in Eastern Mediterranean and Cyprus as we have witnessed the 'strategic blindness' attitude," Erdoğan said in his speech, adding that he hopes the new round of exploratory talks with Greece would be fruitful.

"I believe the new round of exploratory talks with Greece that will begin in January will mark a new era," he said.

On Monday, the Turkish Foreign Ministry announced that the 61st round of the exploratory talks between Turkey and Greece will take place in Istanbul on Jan. 25, 2021.

Exploratory talks refer to having bilateral dialogue during which the parties have a critical, but also a constructive, approach to each others' opinions. During the talks, the sides provide the necessary information to each other, propose recommendations to solve the problem, discuss these recommendations and then, hopefully, reach an agreement. This format of talks is usually used when there are multiple problems between the parties as the method is regarded as one of the best ways to enhance dialogue diplomatically. In this respect, the problems are treated as a whole package, and when one problem is not solved, the others are considered to be unsolved as well.

Çavuşoğlu underlined that the main reason why there have been disagreements between Turkey and the EU over the past few years is the fact that some members of the union have transferred their individual feuds with Ankara to the bloc. "They tried to force the EU and Turkey to oppose each other," he said.

The foreign minister, in this respect, referred to the crisis with Greece over the Eastern Mediterranean and expressed that Ankara's call for dialogue has been dismissed multiple times and instead, a one-sided approach has been embraced by the EU, in favor of Athens.

"In 2020, we have all seen that threatening rhetoric would lead to no solution. Thus, in December's summit, the EU decided to adopt a more reasonable stance (in the Eastern Mediterranean crisis)," Çavuşoğlu said, adding that the declaration of the summit had some undesirable articles. The summit, in general, revealed that most EU countries are aware of Turkey's importance for the union, he said.

He added that this positive shift in the EU's approach leads Turkey to pick up reforms and turn a new page in its relations with the bloc with expectations of escalating the country's membership process.

Çavuşoğlu also heralded that on Jan. 21, he will visit Brussels and have a series of meetings with several EU authorities.

As far as the refugee crisis is concerned, Erdoğan said: "The 2016 migrant agreement signed with the EU needs to be updated. There were promises from the union on assisting Turkey's efforts for refugees, such as building briquette houses on the border, but none of them were met."

Under the deal, Turkey was promised 6 billion euros ($6.77 billion) in financial aid, which was initially designed to be given to the country in two stages and to be used by the Turkish government to finance projects for Syrian migrants. Visa freedom for Turkish citizens was also a perk of the agreement, and the customs union was to be updated.

The customs union is a trade agreement between Turkey and the EU that came into effect on Dec. 31, 1995, following a March 6, 1995, decision by the European Community-Turkey Association Council to establish a customs union that allows goods to travel between the two entities without customs restrictions. The customs union does not cover essential parts of the economy such as agriculture, services, or public procurement.

The president also touched upon rising Islamophobia, stating that the anti-Muslim hatred not only threatens the lives of Muslim people in Europe but has also become a deep black hole regarding European values.

In Europe, racist attacks targeting Muslims or immigrants increasingly make the headlines as white supremacists become more efficient in an age where their ideals, or at least parts of them, are going mainstream. There is no single large group orchestrating these attacks against Muslims and immigrants. Rather, individual attacks lead to more attacks by copycats. The tolerant political climate under the pretext of freedom of speech has helped far-right sympathizers with violent tendencies expand their support.

Turkey has long criticized the EU and member countries for their indifference to Ankara's security concerns about terrorist groups, as many PKK and the Gülenist Terror Group (FETÖ) members are still allowed to continue their activities on the continent. The EU also opposed Turkey's counterterrorism operation in northern Syria against the PKK's Syrian branch, the YPG, in 2019.

As far as the recent Nagorno-Karabakh war is concerned, Erdoğan emphasized that peace was established in 44 days thanks to Turkey's support, which was the desired outcome the Minsk Trio failed to achieve over a span of 30 years.