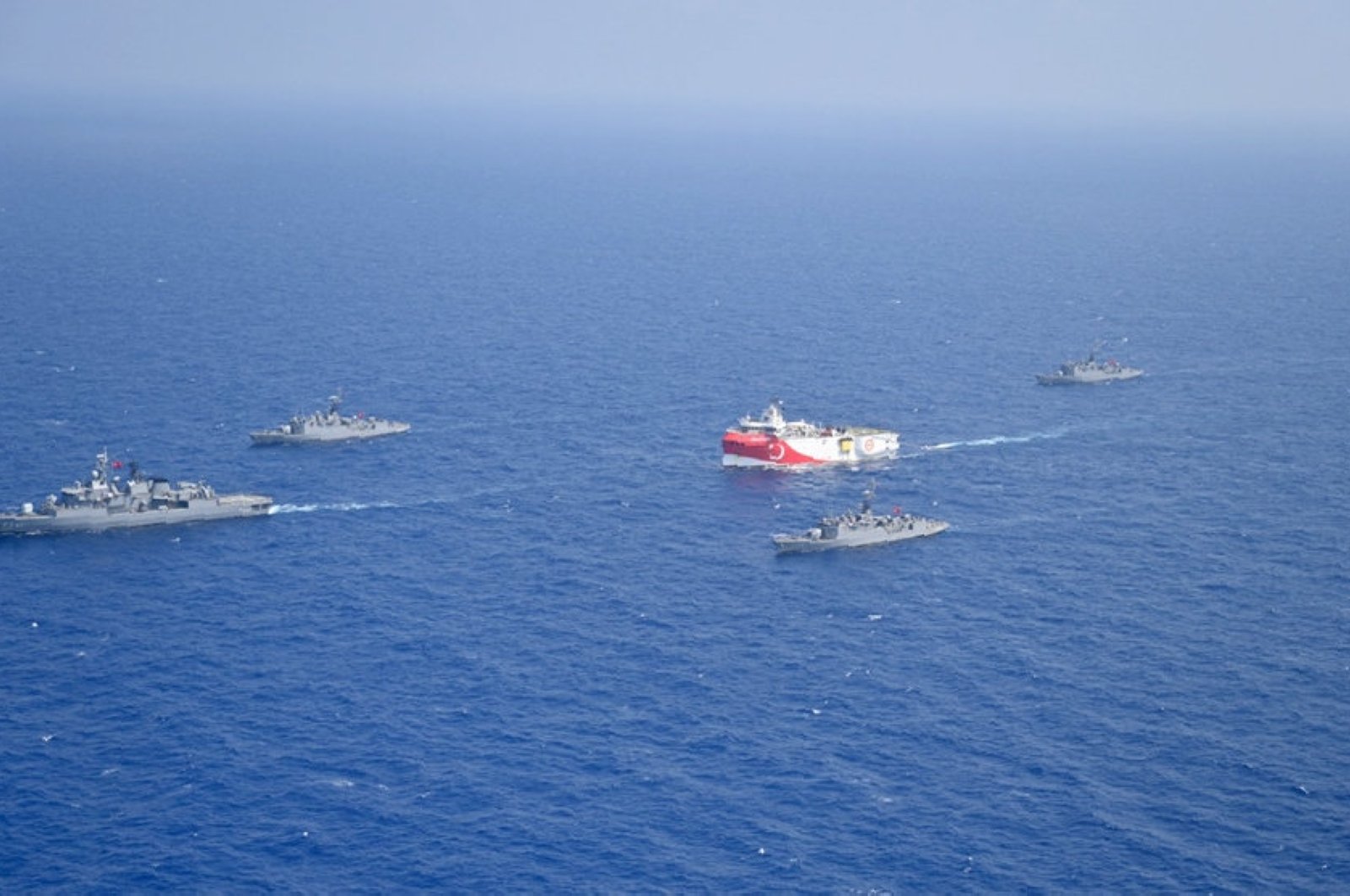 Turkey's research vessel Oruç Reis, in red and white, is surrounded by Turkish navy vessels as it heads to the west of southern Antalya province, Turkey, in the Mediterranean, Aug 10, 2020. (AP Photo)
by DAILY SABAH WITH AGENCIES Sep 24, 2020 11:53 am

While Turkey and Greece have agreed on restarting exploratory talks to discuss disputes in the Eastern Mediterranean, constructive dialogue is taking the place of threats

The European Union is unlikely to follow through on the threat to impose sanctions on Turkey after Ankara and Athens agreed to resume talks over their contested maritime claims in the Eastern Mediterranean, senior EU diplomats and officials said Wednesday.

Mediation led by German Chancellor Angela Merkel and European Council President Charles Michel has calmed Greek and Turkish tempers after weeks of tension over the disputed region, securing an agreement on Tuesday to restart talks on continental shelf boundaries that broke off in 2016. No date has been set for the exploratory talks planned to take place in Istanbul.

“From our point of view, it is, of course, important that these talks begin soon and further confidence is built up,” Steffen Seibert, a spokesperson for Merkel, told reporters in Berlin Wednesday.

"Dialogue has reduced the need to threaten sanctions on Turkey, and so there's no consensus among the 27 for such a step right now," one EU diplomat was cited by Reuters as saying.

Turkey's decision to pull its seismic exploration ship, Oruç Reis, out of disputed waters was seen as helpful. A postponement of Thursday's EU summit in Brussels, due to focus on Turkey, has also served to allow more time, a second diplomat said.

The leaders of the EU's 27 nations are expected to review proposals for imposing sanctions on Turkey at their next summit, which was originally scheduled for this week but has been postponed until Oct. 1-2. Greece is an EU member but not Turkey.

Turkey began drilling for oil and gas near the island of Cyprus last year, amid broader fears of a military escalation in the Eastern Mediterranean as Greece and Turkey – who are NATO allies but have been estranged for years over myriad bilateral disputes – held naval drills in the area.

The Greek Cypriot administration proposed in June to impose sanctions on Turkish companies and individuals involved in drilling, but many EU states say such measures would derail diplomacy.

"The Turks are playing a clever game. Being more engaging toward Greece, they are trying to drive a wedge between the other members and us," a Greek Cypriot diplomat said. "We seem to have been left by the wayside."

Turkey has demanded that the host of disagreements it has with Greece be handled as a whole. Those include territorial waters in the Eastern Mediterranean, the continental shelf, demilitarization of the islands, the legal status of geographical formations, the width of national airspace and search and rescue operations.

Turkey also insists that the topics of the continental shelf and exclusive economic zones (EEZ) should be approached with equitable principles, unlike Greece's current expansionist approach.

Turkey rejects the one-sided steps by Greece in concert with the Greek Cypriot administration in the region, which, Turkey says, overlook the rights of the Turkish Republic of Northern Cyprus (TRNC).

Within the scope of these demands, the fact that exploratory talks are on the way – which will disable Greece to act ex parte – shows that Turkey's efforts in the region to preserve their rights have started to pay off.

The mechanism of “exploratory talks,” which Turkey and Greece developed to discuss the problems related to the disputes in the Aegean Sea, is based on the decisions taken at the EU’s 1999 Helsinki Summit. In 1999, when bilateral relations between the two neighboring countries entered a period of detente, Turkey was given the status of a full candidate member for the EU. However, it was demanded that they resolve the disputes in the Aegean Sea and the issue of Cyprus with Greece.

The EU said that the border disputes must be resolved through peaceful initiatives and that it would reevaluate the situation at the end of 2004. Therefore, launching a process for resolving the Aegean Sea disputes with Greece became a prerequisite for Turkey in order to enter full membership negotiations.

Following long negotiations between the two countries’ diplomats, their foreign ministry representatives decided to launch the first exploratory talks on March 12, 2002. The format continued until March 1, 2016, and a total of 60 rounds of talks were held.

In recent weeks, Greece and Turkey have been holding separate, military-level talks at NATO aimed at preventing an armed confrontation between the two allies in the Eastern Mediterranean.

NATO Secretary-General Jens Stoltenberg said that “good progress” had been made in Brussels.

“These are technical military talks. They complement the diplomatic efforts led by Germany to resolve the underlying dispute,” Stoltenberg said.

Despite positive steps taken for a constructive dialogue, Greece said Wednesday that it still expects the EU to approve sanctions against Turkey.

Greek government spokesperson Stelios Petsas said he expects the national leaders to adopt some proposals, but he told public broadcaster ERT television: “The question is how those sanctions will be activated in the case of Turkey’s noncompliance because we are not used to seeing the (EU) operating on a very fast track.”

Also, the Greek Cyprus is holding up EU sanctions against Belarus officials suspected of election fraud or being involved in a security crackdown until the bloc honors a deal that EU foreign ministers struck last month on imposing similar measures on Turkey.

Greek Cypriot Foreign Minister Nikos Christodoulides said his government would support even tougher sanctions against Belarus officials. But he said it makes no sense to delay sanctions against Turkey when it continues to violate an EU member's sovereign rights.

Meanwhile, a Greek Cypriot government statement said European Commission President Ursula von der Leyen told Greek Cypriot leader Nicos Anastasiades in a telephone call Wednesday that the EU would be “forced to take measures" if Turkey doesn't end its “illegal actions" and if “there is no de-escalation of tensions.”

On Thursday, the Turkish Communications Directorate organized the “International Eastern Mediterranean Conference” in which officials and experts discussed Turkey’s vision of fairness and cooperation in the region and its impacts on the international order.

Giving the opening speech of the videoconference, Communications Director Fahrettin Altun said that Turkey, under the leadership of President Recep Tayyip Erdoğan, has always favored diplomacy.

“We are happy about the opportunity of launching exploratory talks with Greece, because diplomacy is always the right method,” he said.

Altun added that actors should de-escalate the tensions in the region and work together for a fair and sustainable solution to the problems.

In the first session of the conference, Deputy Foreign Minister Yavuz Selim Kıran said although Greece has frequently voiced bringing the maritime border disputes to arbitration in international courts, it has always hesitated to do it in practice.

Turkey's presidential security and foreign policy committee member and rector of Altınbaş University, Çağrı Erhan, also said that the involvement of third parties is not helpful for a solution.