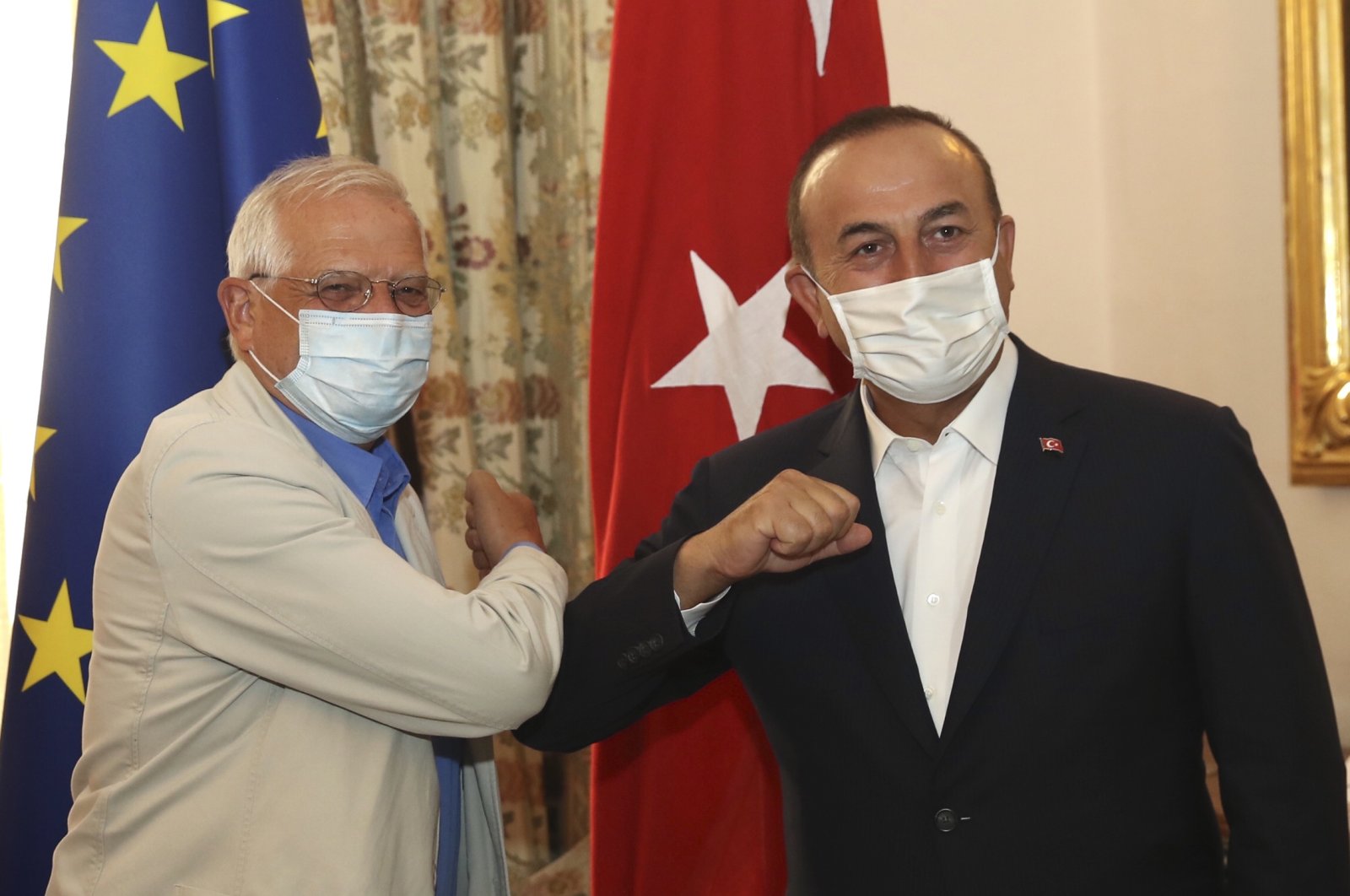 Foreign Minister Mevlüt Çavuşoğlu (R) and Josep Borrell Fontelles, high representative and vice-president of the European Commission, greet each other by touching elbows before a meeting in Valletta, Malta, Aug. 6, 2020. (AP Photo)
by DAILY SABAH WITH AA Aug 07, 2020 11:47 am
RECOMMENDED

The European Union desires to see stronger relations with Turkey, according to a statement by the bloc following a meeting Thursday between Turkey's top diplomat, Mevlüt Çavuşoğlu, and the EU's foreign policy chief, Josep Borrell.

"The meeting was a continuation of their intensive exchanges held over the last months, most recently over the phone on 23 July," it said.

Çavuşoğlu paid a working visit to Malta on Wednesday, meeting with Borrell to address bilateral relations as well as regional and international issues.

Çavuşoğlu said on Twitter following the meeting: "Met w/ High Representative Josep Borrell Fontelles of the EU. Our relations should not be taken hostage by some member states."

"EU should keep its promises on migration. Turkey will continue to defend forever its rights in the Eastern Mediterranean," he said.

Borrell's office also noted that the meeting was held ahead of an informal meeting of EU foreign ministers on Aug. 27-28 in Berlin, where they will discuss relations with Turkey again, "a follow-up to the debate held at the Foreign Affairs Council in Brussels" on July 13.

It said Borrell explained the outcome of the debate to Çavuşoğlu.

"They had an open and frank exchange on EU-Turkey relations and on the situation in the Eastern Mediterranean, as well as on key regional issues, in particular on conflicts in Libya and Syria," said the statement.

The bloc’s foreign ministers gathered in Brussels last month to discuss Turkey and international issues in a face to face meeting for the first time since the outbreak of the COVID-19 pandemic.

The bloc's relationship with Turkey is "the most important item on the agenda today," Borrell had told journalists before that meeting.

"The relationship with Turkey is not especially good at this moment," he added.

EU sources confirmed that ministers discussed the future prospects of the 2016 EU-Turkey agreement on migration, as well as disagreements over Turkey's territorial and energy exploration rights in the Eastern Mediterranean and France's alleged claims that Turkey harassed one of its vessels taking part in a NATO mission.

Borrell had visited Turkey last month, a week before the gathering in Brussels, and held a meeting with Çavuşoğlu. In that meeting, the two diplomats discussed various issues troubling relations between Ankara and Brussels.

"Turkey will support the EU's mediation on energy resources in the Eastern Mediterranean as long as it is an honest broker," Çavuşoğlu said following his meeting with Borrell in the capital Ankara.

He added that Turkey has always been fair and transparent in its relations with the EU and it expects the same from Brussels.

Çavuşoğlu emphasized that if the EU took additional decisions against Turkey, the country would have no choice but to respond.

Borrell said the EU held extensive discussions on Turkey, which he said is a key partner and candidate to join the bloc.

He asserted that relations between the EU and Turkey have become one of the most important issues.

Borrell added that though it was not the best period in relations, the sides needed to work together to improve ties.

Signing a partnership agreement with the European Economic Community (EEC) in 1963, Turkey applied for EU membership in 1987 and became a candidate country in 1999. Accession talks began in 2005. But negotiations stalled in 2007 due to objections of the Greek Cypriot administration on the divided island of Cyprus as well as opposition from Germany and France.

Ankara and Brussels also signed an agreement in 2016 to find a solution to the influx of refugees heading to the bloc. According to the deal, Turkey was promised 6 billion euros ($6.6 billion) in financial aid, which was initially designed to be given to the country in two stages and be used by the Turkish government to finance projects for Syrian refugees. Visa freedom for Turkish citizens was also promised to be provided under the agreement.

In exchange for these promises of the EU, Turkey took the responsibility of discouraging irregular migration through the Aegean Sea by taking stricter measures against human traffickers and improving the conditions of more than 3.5 million Syrians living in Turkey. Despite significant developments in the control of migration traffic, the EU could not fully deliver on its commitments stated in the deal.