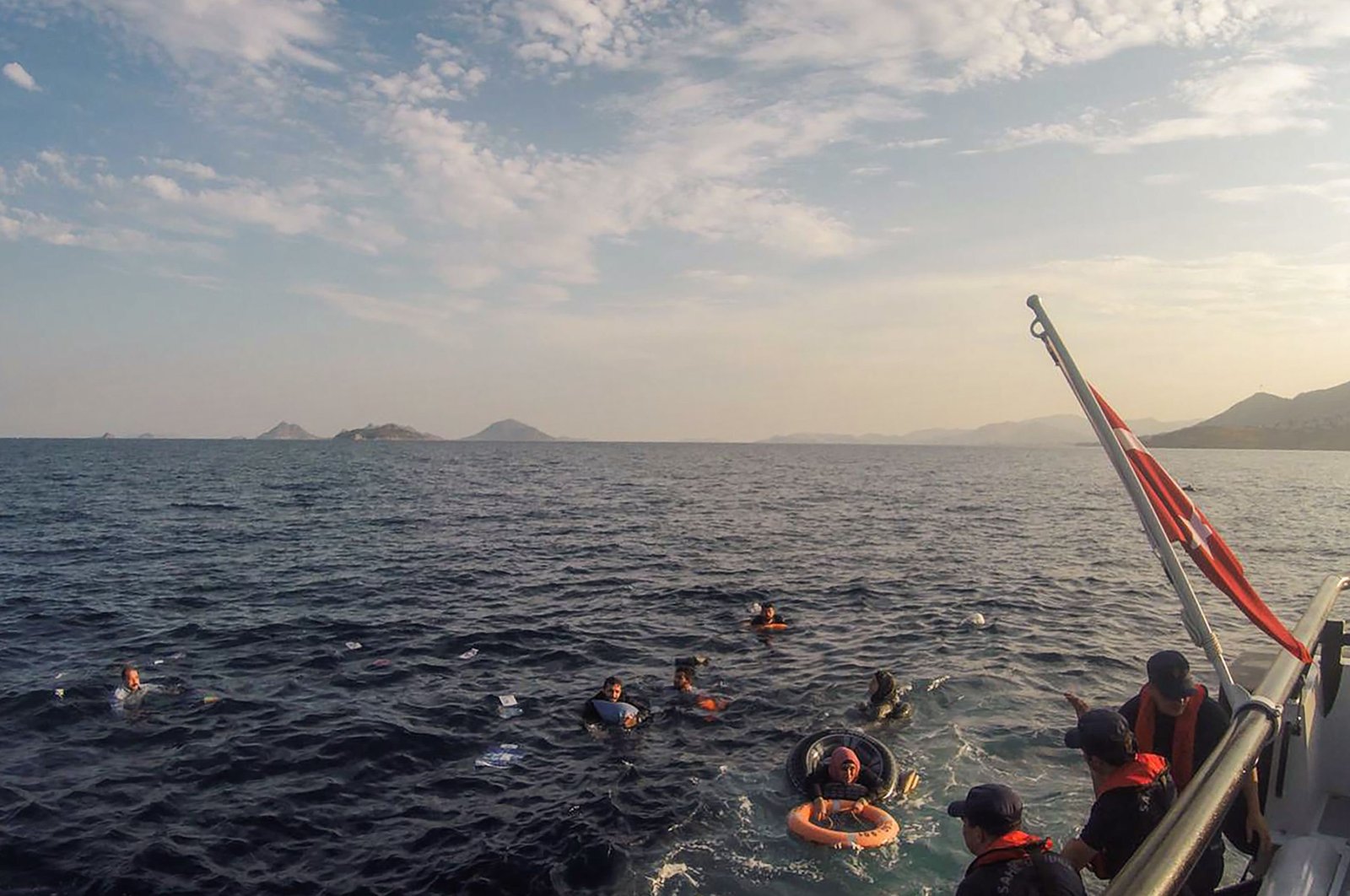 Turkish coastguard shows illegal migrants being rescued after their boat sank in the Aegean sea, off the coast of southwestern Turkey, June 17, 2019. (AFP Photo)
by DAILY SABAH Dec 04, 2020 3:07 pm
RECOMMENDED

Recent footage published Friday revealed that the Greek coast guard tried to sink boats carrying irregular migrants to block them from reaching the European Union's borders. This once again falsifies the denials about migrant pushbacks in the Aegean Sea and increases the pressure on European Border and Coast Guard Agency (Frontex) head Fabrice Leggeri over the agency's role in violating human rights.

In the footage, which was shared by Anadolu Agency (AA) and includes several pushback incidents, boats carrying irregular migrants including children were subjected to inhumane treatment by the members of the Greek coast guard, which tried to push migrants back to Turkish territorial waters. While conducting dangerous maneuvers that could cause the boats to sink, they also made holes in the dinghies with sharp iron sticks. Bullets were also fired near the boats to intimidate the migrants.

The footage also shows that the Turkish Coast Guard Command rescued the migrants to save their lives and warned their Greek counterparts that they were violating international law.

On Tuesday, EU lawmakers lashed out at Leggeri over allegations that the agency illegally stopped migrants from entering Europe and supported Greek coast guards in pushing migrants back toward Turkish territorial waters in the Aegean Sea, calling for his resignation and demanding an independent inquiry.

At least six incidents where Frontex units were involved in pushbacks near the islands of Lesbos and Samos between April 28 and Aug. 19 have been documented by international media outlets, mainly by Der Spiegel.

Leggeri said that no evidence of any involvement of Frontex units in pushbacks had been found so far. He said EU member countries have control over operations in their waters, not Frontex, and he called for the rules governing surveillance of Europe's external borders to be clarified.

"We have not found evidence that there was active, direct, or indirect participation of Frontex staff or officers deployed by Frontex in pushbacks," he told the lawmakers. When it comes to operations, Leggeri said, "only the host member state authorities can decide what has to be done."

Pushbacks are considered contrary to international refugee protection agreements, which say people shouldn't be expelled or returned to a country where their life or safety might be in danger due to their race, religion, nationality or membership in a social or political group.

Turkey and Greece have been key transit points for migrants aiming to cross into Europe, fleeing war and persecution to start new lives. Turkey has accused Greece of large-scale pushbacks and summary deportations without access to asylum procedures, which is a violation of international law. It also accuses the EU of turning a blind eye to what it says is a blatant abuse of human rights.