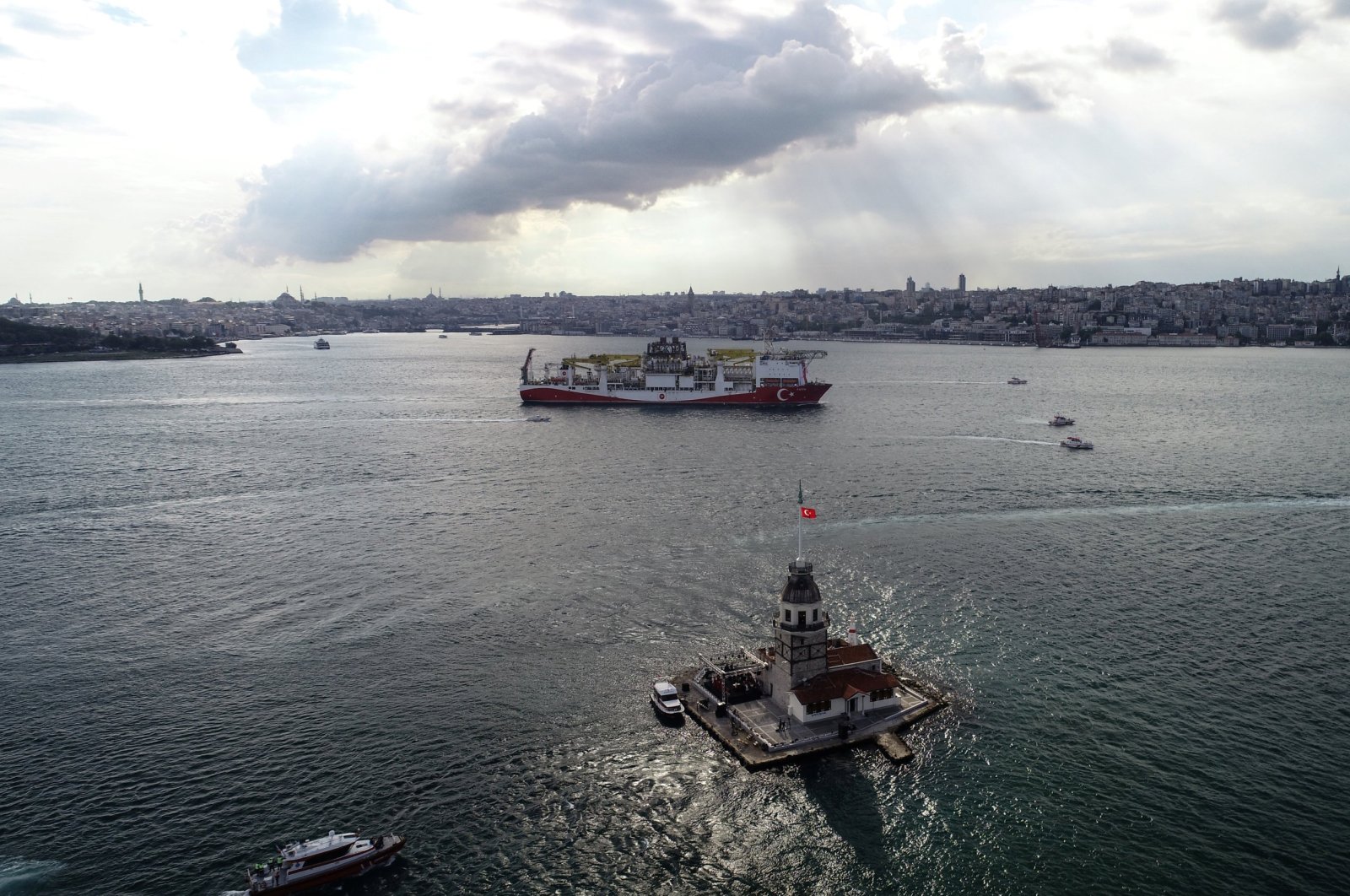 Turkey's drilling vessel, Fatih, sails through the Bosporus as it leaves for the Black Sea, Istanbul, Turkey, May 29, 2020. (Reuters Photo)
by DAILY SABAH Jul 15, 2020 12:39 pm
Edited By Dilara Aslan
RECOMMENDED

Greece has been attempting to rally the European Union to prepare “crippling” economic sanctions against neighboring Turkey if it goes ahead with its planned offshore gas and oil exploration operations off a number of Greek islands, Foreign Minister Nikos Dendias said Tuesday.

Relations between the long-time regional rivals and uneasy NATO allies have deteriorated fast in recent months, with differences including offshore drilling rights, immigration flows and Turkey's decision to revert Istanbul’s iconic Hagia Sophia from a museum to a mosque.

Dendias said in an interview Tuesday he had told his EU colleagues that if Ankara went ahead with plans to drill off the islands of Crete, Rhodes and Karpathos, the bloc must respond with a pre-drafted list of severe sanctions.

Since last year, Ankara sent drilling vessels to the Eastern Mediterranean, asserting the right of Turkey and the Turkish Republic of Northern Cyprus (TRNC) to the resources in the region.

Athens and the Greek Cypriot administration have opposed the move, threatening to arrest the ships' crews and enlisting EU leaders to join their criticism.

Ankara has on every occasion vowed to see energy as an incentive for a political resolution on the island and peace in the wider Mediterranean basin, not a catalyst for further tensions.

As a guarantor nation for the TRNC, the country has consistently contested the Greek Cypriot administration's unilateral drilling activities in the Eastern Mediterranean, asserting that the TRNC also has rights to the resources in the area.

“The European Union is Turkey's biggest trading partner,” Dendias told private Star TV. ”If it wants, it can create a huge problem for the Turkish economy. That's not my wish ... but we must be clear."

Greece says it has exclusive rights in the areas targeted by Turkey, which in the case of Crete lie far off the Turkish coast. Ankara says it is justified in exploring there following a deal it signed with the internationally recognized government of Libya, on the far side of the Mediterranean.

On Nov. 27, Ankara and Libya’s United Nations-recognized Government of National Accord (GNA) signed two separate pacts, one that encompasses military cooperation and the other the maritime boundaries of the two countries in the Eastern Mediterranean.

The maritime pact, effective from Dec. 8, asserts Turkey's rights in the region in the face of unilateral drilling by the Greek Cypriot administration, clarifying that the TRNC also had rights to the resources in the area.