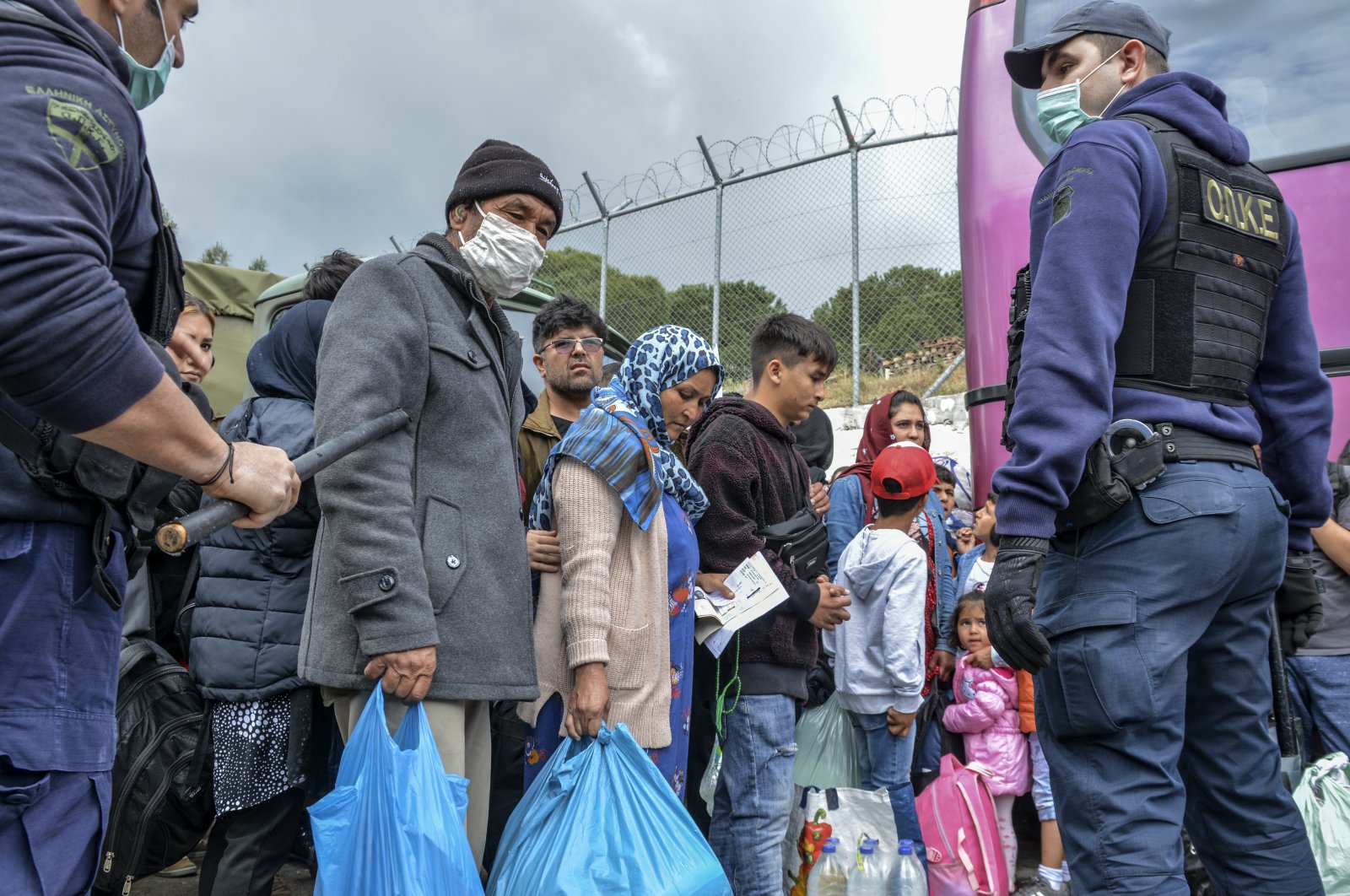 Migrants wait to board buses outside Moria camp on their way to the port of Mytilene, on the northeastern Aegean island of Lesbos, Greece, May 3, 2020. (AP Photo)
by Agencies May 03, 2020 7:22 pm
RECOMMENDED

Greece evacuated hundreds of migrants from a notoriously overpopulated island camp to the mainland on Sunday.

Two groups of 142 and 250 "vulnerable" migrants boarded to ferries on the island of Lesbos, according to a police source, after leaving the Moria camp where conditions were said to be deplorable.

In April, Human Rights Watch (HRW) urged Greek authorities to act quickly to ward off a potential health crisis in migrant camps lest the coronavirus take hold there.

The European Union has asked Greece to move migrants most at risk of contracting the coronavirus from overcrowded camps on its Mediterranean islands.

Athens had opposed moving them all to the mainland, citing the absence of cases in the camps while the coronavirus was spreading elsewhere in the country.

"Authorities are getting ready to transfer a group of about 395 migrants seen as vulnerable later today to the mainland via ship," a police official, who declined to be named, said.

A transfer from the Moria camp would be the first since confinement measures were imposed on March 23 to stem the spread of COVID-19. A few days before that, around 600 migrants had been transferred to the Greek mainland.

An estimated 37,000 migrants live in dreadful conditions on five Greek islands in the Aegean Sea.

Moria holds around 19,300 migrants, more than six times its capacity.

Plans to alleviate overcrowding were stalled by the discovery of COVID-19 cases among migrants on the mainland.

But Greek officials now plan to move around 2,000 people from the islands, and migration minister Notis Mitarachi said recently that 10,000 had reached the mainland in the first three months of the year.

"The goal is to transfer about 2,400 from island camps to mainland Greece," a Migration Ministry official said.

On Sunday, Mitarachi paid a visit to a medical center at the Moria camp that is to test asylum-seekers for signs of the coronavirus.

Around 150 migrants on the mainland have tested positive for the virus, but up until now, no cases have been reported in the overcrowded island camps.

The worst congestion occurs in camps on five Aegean islands near Turkey where there are more than 36,000 people with space for fewer than 6,100 people.

Meanwhile, Greek coast guards, frequently criticized by rights groups for their treatment of migrants, pushed 48 asylum-seekers back to Turkey, which constitutes a violation of international human rights.

According to Interior Ministry officials speaking to Anadolu Agency (AA), Turkish coast guards rescued the desperate migrants and asylum-seekers who were left to fend for themselves by the Greek guards.

The Turkish Foreign Ministry in March said, "Greece does not protect the borders of the European Union; to the contrary, (it) disgracefully tramples on the very principles and values this Union was built upon, by treating the migrants coming to its gates as enemies instead of human beings."