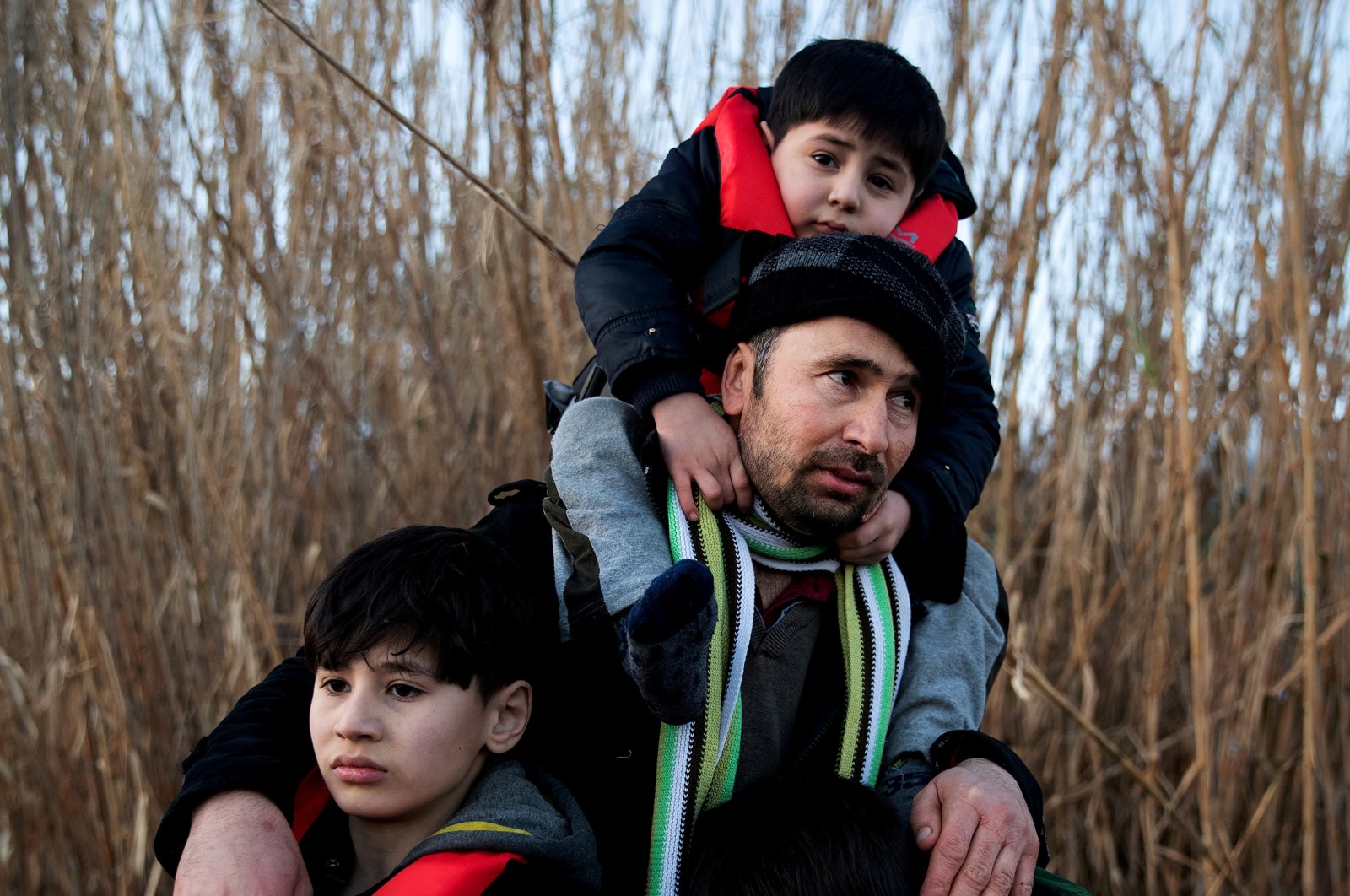 An Afghan man holds his three sons after arriving on a dinghy on a beach near the village of Skala Sikamias, after crossing part of the Aegean Sea from Turkey to the island of Lesbos, Greece, March 2, 2020. (Reuters Photo)
by DAILY SABAH Dec 14, 2020 11:59 am
RECOMMENDED

Greek authorities forcefully pushed back migrants after they reached the island of Lesbos in late November, a report said Monday.

A group of migrants and refugees who crossed to the Greek island from Turkey in a boat was caught by Greek security forces after reaching land and was forcefully put into a boat and sent back to Turkish territorial waters, BBC reported on the testimony of migrants and witnesses.

Jeancy Kimbenga, 16, from the Democratic Republic of Congo was part of a group trying to cross into Europe. It was his third attempt, but he was illegally pushed back by the Greek authorities, like in his previous two attempts.

Kimbenga documented some parts of his third attempt in order to prove the unlawful act of the Greek forces who blocked freedom of movement and denied refugee rights.

When Kimbenga and the accompanying migrants reached Kratigos, a settlement in the southeast of the island, he sent his location and photos from the area to the Norwegian civil society foundation Aegean Boat Report, which monitors the migrant movements in the region. Kimbenga aimed to prove his arrival at the European border.

Hours after the group landed, they came across Kostas Theodorou, an academic living on the island. Theodorou said there were two pregnant women in the group who wanted to go to a hospital or a migrant camp. When Theodorou offered to call the police for help, the women refused due to fear of being extradited.

As the migrants and refugees continued on their route, they kept sending GPS locations and photos to the Aegean Boat Report. Finally, they were welcomed by Greek coast guard officials who told them they would be transferred to migrant camps for COVID-19 quarantine and put them on a bus.

After a trip that lasted a few kilometers, they got off the bus and were handed over to men wearing face masks.

Kimbenga said their phones were seized to prevent them from taking pictures and videos, and they were beaten up and forcefully put into boats. They were pushed back to Turkish territorial waters in these boats.

He added that three different migrant groups landed on the island that day but only two of them were sent back. In the end, both groups’ boats were rescued by the Turkish Coast Guard Command from Turkey's territorial waters.

Kimbenga is now living in Istanbul and says he will try again when he's ready.

Pushbacks are considered contrary to international refugee protection agreements, which say people should not be expelled or returned to a country where their life or safety might be in danger due to their race, religion, nationality or membership in a social or political group.

Turkey and Greece have been key transit points for migrants aiming to cross into Europe, fleeing war and persecution to start new lives. Turkey has accused Greece of large-scale pushbacks and summary deportations without access to asylum procedures, which is a violation of international law. Ankara has also accused the EU of turning a blind eye to what it says is a blatant abuse of human rights.

The Turkish interior minister on Saturday criticized the Greek coast guard for its ill-treatment of unauthorized migrants attempting to cross into Europe.

"Your coast guard units are leveling up the torture and inhumane treatment every day," Soylu said, pointing to the footage in which some of the migrants were severely battered by the Greek authorities.

Soylu went on to say Greek coast guard units were responsible for the "inhumane action" and pushbacks into Turkish territorial waters, and that the European Union's border agency, Frontex, was "complicit" in such acts, which were "ignored" by the EU.

While Frontex is required to rescue migrants, the Frontex vessels patrolling the area instead sped past the overcrowded, inflatable boats, creating dangerous waves to force them to return to Turkish shores. A Frontex aircraft was also documented passing by migrants who were seeking help at sea but did not rescue them.

Frontex head Fabrice Leggeri, grilled by Members of the EU Parliament's Civil Liberties Committee at the end of November, said no evidence had been found of "active, direct or indirect" Frontex involvement in pushbacks. Only the host member state (Greece) could decide what had to be done, he added. Some MEPs supported the work of Frontex, but one group, the Socialists and Democrats, called for Leggeri's resignation.

Greece rejects accusations and says they protect the borders of the EU in line with international law. International nongovernmental organizations (NGOs) reported at least 300 pushback incidents by Greek security forces in 2020.