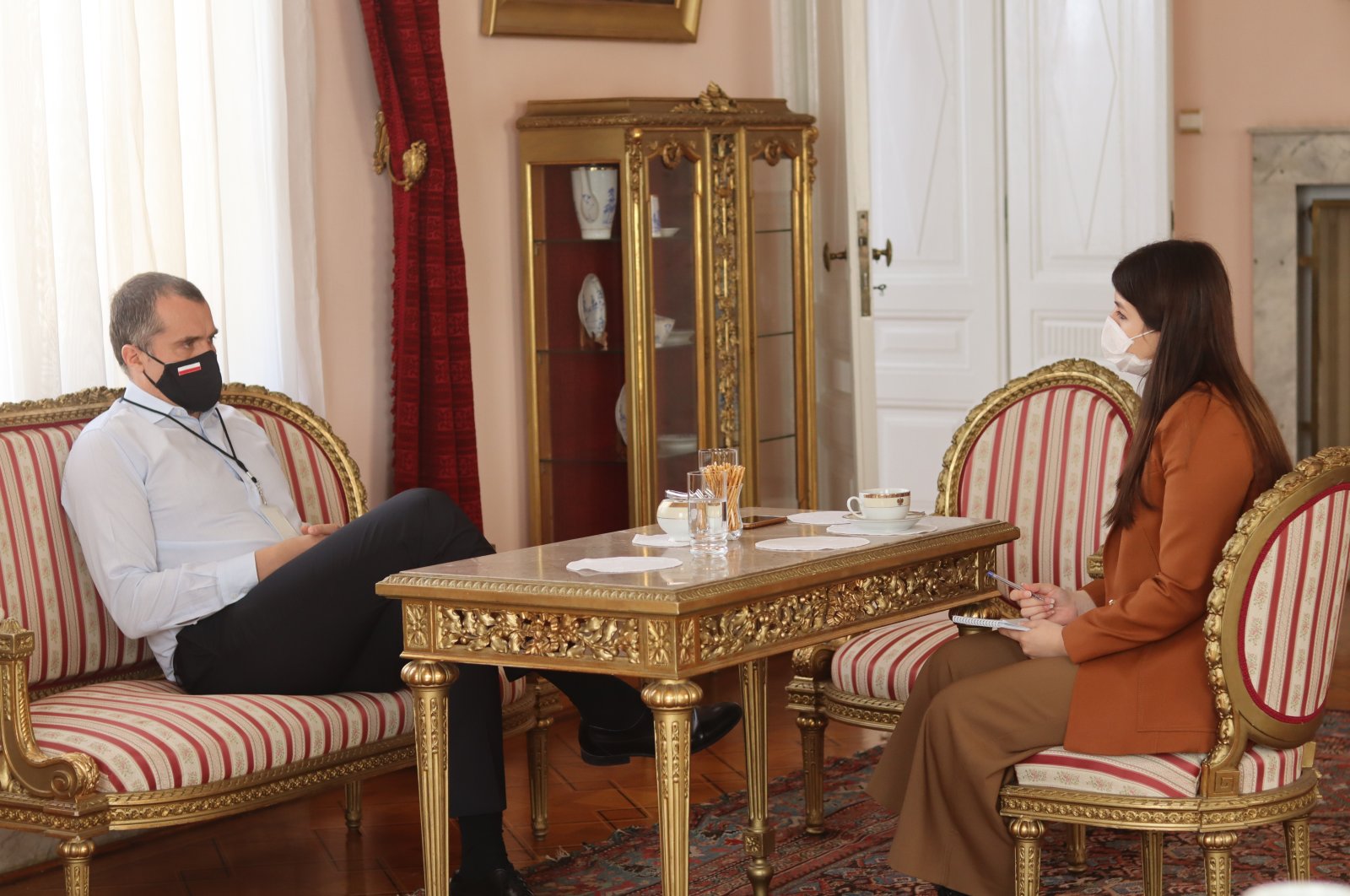 Poland's ambassador to Turkey expressed his will to bring together the powers of Ankara and Warsaw, underlining the importance of national security and a strong alliance within NATO

As two countries that place particular emphasis on their defense and security, Poland values and hopes to further cooperation in both fields, Poland’s Ambassador to Turkey Jakub Kumoch said, adding that Warsaw also supports Ankara’s accession to the European Union.

“Politically speaking relations are excellent and I do not exaggerate using this word because there is not even a single problem between Poland and Turkey. Both countries are allies in NATO. Both countries believe that security of the state, its sovereignty and independence is the most important task for the state,” Kumoch told Daily Sabah in an exclusive interview.

“The mere understanding of the role of the NATO as a military alliance and how important it is with protecting the national sovereignty and territorial integrity is what brings us together,” the ambassador highlighted.

“Both countries have a particular neighborhood which is both challenging and demanding,” the ambassador said, pointing out that the two countries understand each other and engage in discussions concerning questions of security ad partnership within NATO.

“From both sides, there is a big interest in increasing our cooperation,” Kumoch stated, saying that Poland emphasizes the role of a strong military alliance and that the spending on armed forces is taken seriously in both countries. “We do not believe that the era of peace and happiness has come. If we want to have peace, we have to be prepared,” he underlined.

Regarding ongoing defense cooperation, the ambassador stated that Poland is increasing its military presence in Turkey. “We are sending soldiers to Incirlik,” he said, referring to the air base located in Turkey's Adana province just 110 kilometers (about 68 miles) from the Syrian border. The base has been a strategic location since its establishment in 1954 as it played major roles during the Cold War, the 1990-1991 Gulf War and the U.S.-led Operation Inherent Resolve targeting Daesh elements in Syria and Iraq.

“We were one of the few countries who responded to Turkey’s call for help,” Kumoch said. “When our allies ask for solidarity, for help, we do that because we also want this. We historically know what it means to have an unsecure border.”

Stating that Turkey is one of the major players in the region and recognizable in the world, the ambassador put forth his ambition to bring together “the enormous power of Turkey and the enormous power of Poland.” “With the same views on security our international configurations are very similar,” he continued.

Ankara’s support for Poland’s accession to NATO in 1999, as well as Poland’s support for Turkey’s EU membership process, have boosted political and bilateral relations. Deep-rooted relations between Turkey and Poland took on a “strategic” form with the signing of the “Declaration on Turkish-Polish Strategic Partnership” in 2009.

‘Turkey, EU should not drift away’

Kumoch stated that the opportunity for Turkey’s accession into the EU should not be missed and that Warsaw wants to see things go Turkey's way “though there are politicians in Europe who would love to see this, but this is not the Polish position.”

“Poland supports Turkey’s accession to the European Union. We absolutely want Turkey to be a member of the EU, and this should remain our objective,” he pointed out, adding this does not just apply to the current government as previous Polish governments also supported Turkey's EU membership. “Basically, this is a steady policy, and we are continuing it,” he said.

Turkey signed an association agreement with the EU in 1964, which is usually regarded as the first step in eventually becoming a candidate. Applying for official candidacy in 1987, Turkey had to wait until 1999 to be granted candidate country status. The country had to wait another six years until 2005 for negotiations to begin – a uniquely long process compared to other applicants.

One of the current areas of dispute between Turkey and the EU has been over drilling activities and maritime zones in the Eastern Mediterranean, which raised tensions between NATO allies Turkey and Greece.

Saying that Poland expects both countries to sit together and discuss the issue, Kumoch stated: “We know how difficult it is to limit sea borders. We finished delimiting with Denmark only around one year ago after 74 years of discussions. So, we understand that the sea is always a question of dispute and debate.”

He indicated that NATO is the real forum where this issue should be solved.

On top of political and security relations, the Polish envoy expressed the nation's interest in enhancing bilateral cooperation across all fields, particularly in advanced technology and various new segments of the economy.

“What in politically terms is perfect, we are trying to repeat the same in the economy,” the ambassador said, indicating that both Polish and Turkish people are good at doing business. “We really want to achieve the level set by President Erdoğan, which is $10 billion.”

He stated that in order to achieve this target high-tech common projects were essential.

The recently appointed ambassador also touched upon his personal observations of Turkey, noting that it is “a very particular experience” as he had received a scholarship in Turkey as a student of Turcology. Stating that he observed “huge, unbelievable development in Turkey throughout the years which is visible everywhere,” Kumoch said that Poland is also similar in that regard.

“Whoever was in Poland in the 90s and whoever comes to Poland today knows how much difference there is,” he said, emphasizing that it was an important factor for Poland that Turkey has achieved this level of development without being a member of the EU.

“But, limiting our growth to the membership of the EU is a huge error,” he added, stressing that competitiveness and other factors were just as significant in the development of his country.