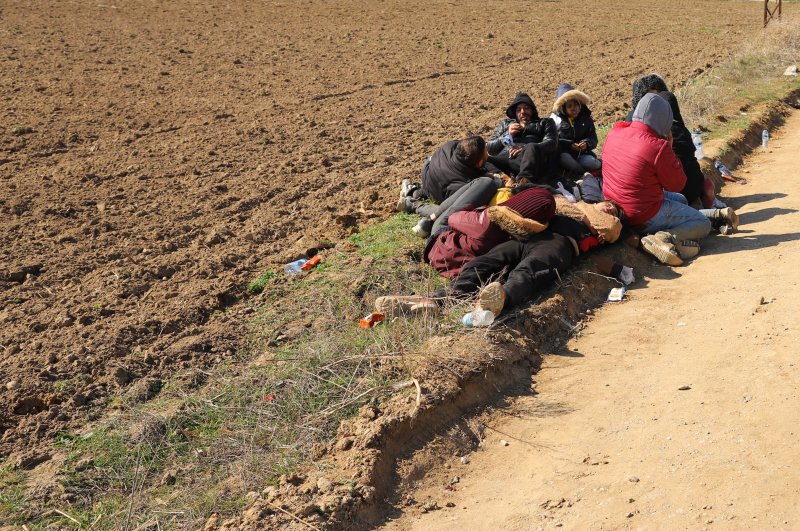 A humanitarian tragedy is unfolding at the Turkish-Greek border, as uncertainty prevails over the future of thousands of migrants who are waiting in hopes of crossing into other parts of Europe, though they have no concrete plans for what to do or where to go. Complaining about the use of excessive force by Greek security forces, the indifference of European countries and becoming political pawns, they continue to desperately hope for a better life.

Sights of crowded migrant groups waiting for a vehicle on the roadsides, lying in any open spaces and walking with their belongings on their back caught my eye the moment I came to the crossroad for the Pazarkule border gate in the western border city of Edirne. The number of taxis, buses and minibuses rapidly increased in tandem with the increasing number of migrants.

Near the Maritsa River, there was the first point where a group of migrants gathered together waiting for a vehicle to bring them near the border. This location also operates as a stop for buses and minibuses. Police and gendarmerie forces are stationed there. A few kilometers away from the border, the first police checkpoint is set up. They ask where I came from and why I am here. After passing this checkpoint, I was stopped at the final checkpoint, which is nearly 1 kilometer away from the border.

Police and gendarmerie forces created a buffer zone within the area 1 kilometer (0.6 miles) from the Greek border, and press members are not allowed to cross this line without official permission or authorization. Officials gave the reason as the security concerns caused by the Greek police on the other side of the border and said, “We cannot guarantee the safety of press members for now after the events that happened this morning.”

They were referring to the news that one migrant was shot dead Monday by gunfire from the Greek side. A Syrian refugee was killed by the Greek border police on Monday while trying to cross to Greece following Turkey’s policy change of opening border crossings to Europe.

Ahmed Abu Emad, a Syrian refugee from Aleppo, was shot in his throat by Greek guards and died of his wounds early Monday morning. Emad was one of the hundreds of thousands of refugees trying to cross the border with the hope of starting a new life, and his body has been brought back to Turkey.

Near the checkpoint, people are exposed to heavy smoke due to tear gas used by Greek security forces trying to stop irregular migrants from entering the country, and the dust and dirt were also intensified by the heavy wind on the warm, sunny day. Many people including security forces, media members and some migrants wear masks to protect themselves from diseases. Mobile food sellers are also here, supplementing the food supplies distributed to migrants by aid foundations.

Fields and wastelands around are filled with migrants camping out, desperately waiting for the Greek side to allow them to cross the border. Some groups walk toward the Greek border through these fields in hope of finding an alternative way to cross the border. Young Afghan men constitute the majority of them.

My first encounter was with two young Afghan men. When I spoke with Murtaza, his uncertainty weighed heavily on the conversation. They did not have a specific destination in mind and did not know what they will do after crossing the border.

When they first heard the news that Turkey would not prevent migrants from trying to pass the border, they traveled to Edirne from the central-northwest province of Eskişehir without a concrete plan. It has been four days, and they are still waiting.

“May they open the doors, then we will see,” he said.

When asked what they are expecting if they can pass the border, he replied: “I do not know. God knows.”

He also said that it is impossible to pass the border for now because of the violent measures taken by the Greek side. However, he still has hope.

“We will wait until the doors are open,” he added.

Hope for a better life in Europe

I then came across a large Syrian family. Their two kids were lying exhausted in a field. The father of the family showed their clothing and shoes, which were destroyed by the Greek security forces when they arrived on the other side of the border. Their money and bank cards were seized and the Greek police sent them back. They were all exhausted and did not know where to go or what to do without money. They came from the capital Ankara three days ago and wanted to go to Germany.

“I think nobody could cross the border. Even if you do, they send you back,” said the father, Halid. He said that their life in Turkey is good, but it could be better in Europe.

“There are my brothers in Germany. If we can go there, it will be better for us and them,” he added.

When asked about their plans if they cannot cross the border, he said they are stuck here because the Greek officials took all of their belongings.

“As you see, they ruined us. May God not allow anyone to suffer in the hands of the Greek police,” he added.

Meanwhile, groups of refugees could be seen walking through the fields toward an unknown future. I started to follow a group in the fields and talked with two young Afghan men. They came from the Black Sea province of Trabzon when they heard the news and have been in Edirne for three days. They continue trying even though they said that the Greek side did not allow anyone to pass through the gates. Despite their skepticism that they would be able to cross the border, they are still chasing a desperate hope. Like many others, they do not know what to do or where to go.

“They do not open the doors; nobody could pass. But, we are still waiting. We heard that some passed to the other side through the river," they said.

Walking through the fields, I saw an elderly woman sitting in a chair. She was from a nearby village and was sitting there to protect her field.

On the other hand, some migrants have specific plans and expectations as they are waiting for Greece to open border gates.

Nesir, another young man from Afghanistan, wants to go to Germany or France for educational opportunities.

“Everyone here wants to go there," he said. Then, he said there are more educational opportunities in these two countries, underlining his desire to take a good education.

After living in Trabzon for two years, he has been waiting here for four days. He never tried to breach the border, because he wanted to pass it legally.

“As all we see, they attack those who are trying to cross the border. I want to do it legally. I do not want to pass illegally. We are now waiting from Greece and other European countries to do something and allow us to cross the border properly,” he said, complaining about being used as a political instrument.

Europe as a land of opportunities

Hamza was the only one who wants to go to Greece specifically. Coming from Afghanistan, he lives in Istanbul. He is enthusiastic about job opportunities in Greece and wants to take a work permit in EU countries.

“They do not open the doors. That’s why I did not try. There are women and children. They throw tear gas every five minutes. There is so much problem. Some cross the border through the river, but I will wait until doors are open,” he said.

The conflict in Syria that started in 2011 has killed hundreds of thousands of people and forced more than 5 million people to flee, while more than 7 million are internally displaced. Refugees mainly took shelter in Turkey, Jordan and Lebanon with Turkey hosting the largest number of refugees. Some have sought to reach Europe via the Aegean and Mediterranean seas, but thousands have died en route to Greece and other coastal countries.

Ankara has often criticized the international community for not providing sufficient humanitarian aid for the refugees in Turkey and not taking in more refugees. Turkish officials have also been calling on world powers to take action to prevent a humanitarian crisis in northwestern Syria’s Idlib province, where the Bashar Assad regime is indiscriminately targeting civilians, prompting a new influx of migrants toward Turkey.

Turkey has been telling European and other countries that it will not be able to handle another wave of migrants as it already hosts over 3.7 million, and officials have been criticizing them for remaining indifferent to the calls and the dire humanitarian situation in northwestern Syria.

Frustrated about broken promises and overwhelmed by already hosting almost 4 million refugees, President Recep Tayyip Erdoğan announced Friday that Turkey would no longer prevent migrant crossings. Several thousands of migrants have gathered at the Turkish-Greek border in the past few days.