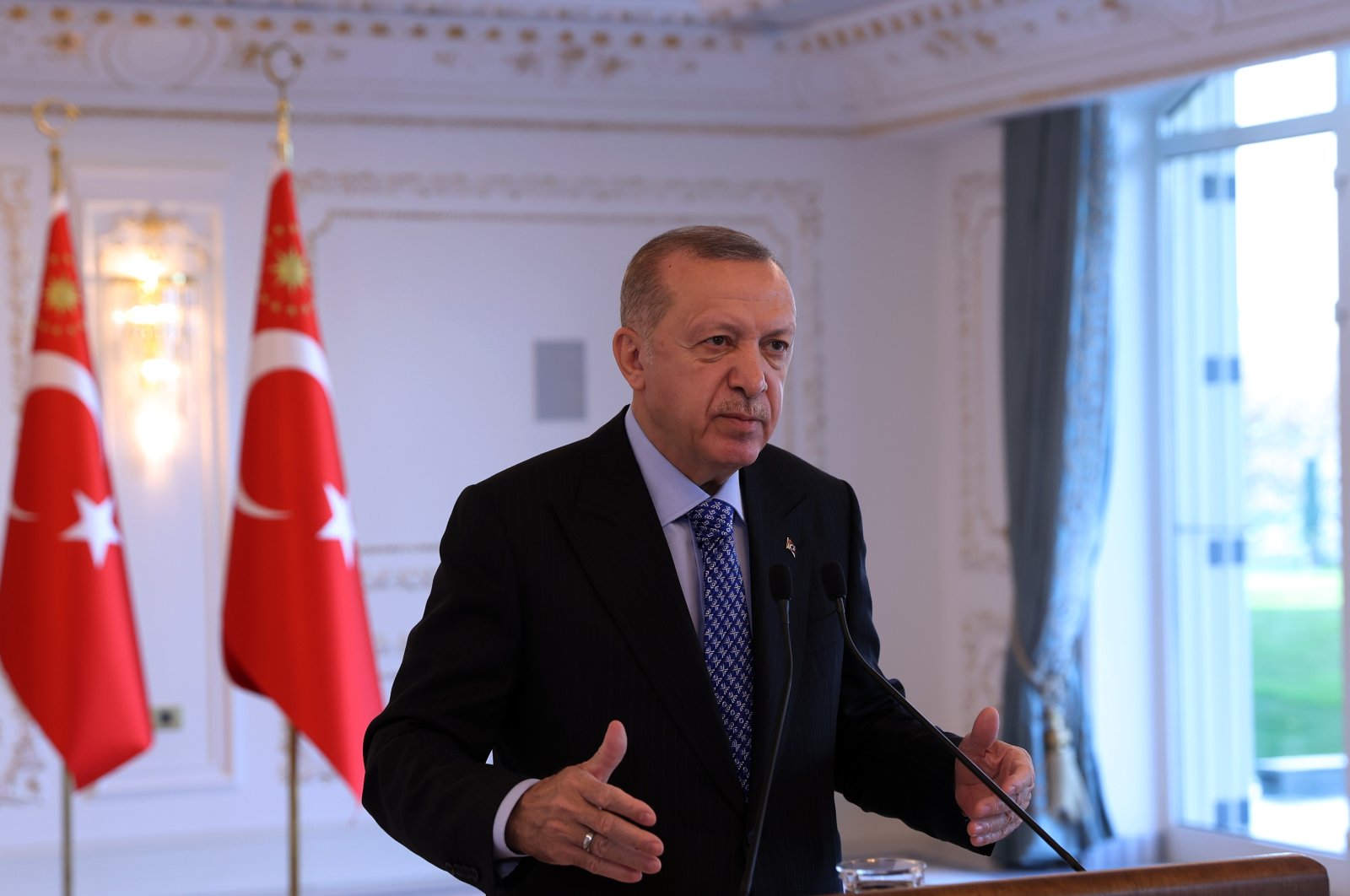 President Recep Tayyip Erdoğan speaks via video link at an inauguration ceremony for the Delivery and Design Center of the first national helicopter engine in Eskişehir, northwestern Turkey, Dec. 5, 2020 (AA Photo)
by daily sabah Dec 07, 2020 11:02 am
Edited By Sinan Öztürk

Turkey is in favor of peace, cooperation and justice in the Eastern Mediterranean rather than tensions, President Recep Tayyip Erdoğan said Monday as he stated the country will not accept any plans that restrict it to a limited zone.

"We are not after exploiting anyone's rights but are only taking a firm stance against pirates that try to take our rights away," Erdoğan said in a video message for the Eastern Mediterranean Workshop, organized by the International Universities Council and the Mediterranean University.

Erdoğan continued by saying Turkey will not accept plans or maps that aim to confine the country to the coasts off southern Antalya.

The president said if Greece truly wants a permanent solution to the problem in the Eastern Mediterranean, it needs to give diplomacy a chance.

He continued by saying that Turkey has remained calm since 2003 despite the actions of the Greek Cypriot administration and the Greek government and continues to maintain its conciliatory stance today.

"The European Union should get rid of its strategic blindness and not let itself be manipulated by either the Greek Cypriots or Greece itself in the Eastern Mediterranean," Erdoğan said, adding that the bloc should stop wronging Turkey and Turkish Cypriots.

Calling on all neighboring countries to stop seeing the matter as a "zero-sum game," Erdoğan said he believes all actors will be able to find a win-win solution when everyone acts consciously, with common sense and sincerity.

The president highlighted that diplomacy and negotiations are the shortest and most guaranteed way to allow sides to reach a common ground.

Speaking at the conference following Erdoğan, Foreign Minister Mevlüt Çavuşoğlu underlined that the EU has to decide what kind of relations it wants with Turkey.

“Either it (EU) will contribute to the solution of problems as an honest mediator and we will continue our cooperation in a win-win understanding in the fields of the fight against terrorism, migration, the customs union, visa exemption, or this tension will continue with the EU taking an unfair decision under the influence of two spoiled countries, which France supports,” Çavuşoğlu stated, referring to Greece and the Greek Cypriot administration.

“We are neighbors with the EU as well as all Eastern Mediterranean countries, and we want to pursue our relations with Greece in a healthy manner,” the top diplomat pointed out, saying that he hoped EU member countries would act similarly in this regard.

The mechanism was designed to reduce the risk of incidents and accidents in the Eastern Mediterranean and includes the creation of a hotline between Athens and Ankara to facilitate resolving conflicts at sea or air.

In order to solve the conflicts around the Eastern Mediterranean, Çavuşoğlu reiterated Turkey’s call for a joint conference with the participation of all actors.

Libya’s Foreign Minister Mohammad Tahir Siyala, who also participated in the workshop, underlined that tensions are reaching dangerous levels in the Eastern Mediterranean.

“We call on all parties to control their actions, refrain from threatening rhetoric, enter dialogue without any preconditions, adhere to international maritime law and make efforts to find a peaceful solution by contributing to stability and security,” Siyala stated, stressing that Libya supported Turkey’s stance on this matter and voiced support for the international conference.

Highlighting that Libya will not give up its rights in the region, Siyala said: “In this regard, we will continue to work with Turkey.”

Siyala reminded that Libya and Turkey signed agreements in November 2019 outlining cooperation in terms of security and maritime affairs, angering Mediterranean countries, including Greece and the Greek Cypriot administration. The diplomatic maneuver prevents the Greeks and Greek Cypriots from unilaterally exploiting energy resources in the region and escalated disputes over potential offshore gas reserves in the Eastern Mediterranean.

“This agreement, accepted by the U.N., was not made against any country. It complies with international maritime law. It is also not an agreement harming the rights of other countries,” he pointed out, saying that some countries condemned the deal following its signing.

“They claimed it was not legal and inked similar agreements. They created multilateral, geopolitical alliances. Their acts are not based upon legal rules because they ignored the rights of other countries,” Siyala added.

Egypt in August announced that it had signed a bilateral agreement with Greece on the "delimitation of maritime jurisdictions" between the two countries. This announcement was followed by Ankara’s statement calling the deal "null and void" while stressing that it usurped and ignored the rights and continental shelves of both Turkey and Libya.

French President Emmanuel Macron, on the other side, hosted leaders from the EU's Mediterranean states for a summit in September. The meeting on the French island of Corsica brought together leaders of France, Italy, Malta, Portugal and Spain with Eastern Mediterranean EU members Greece and the Greek Cypriot administration. Macron, ahead of the summit stated that Turkey was "no longer a partner in the region.”