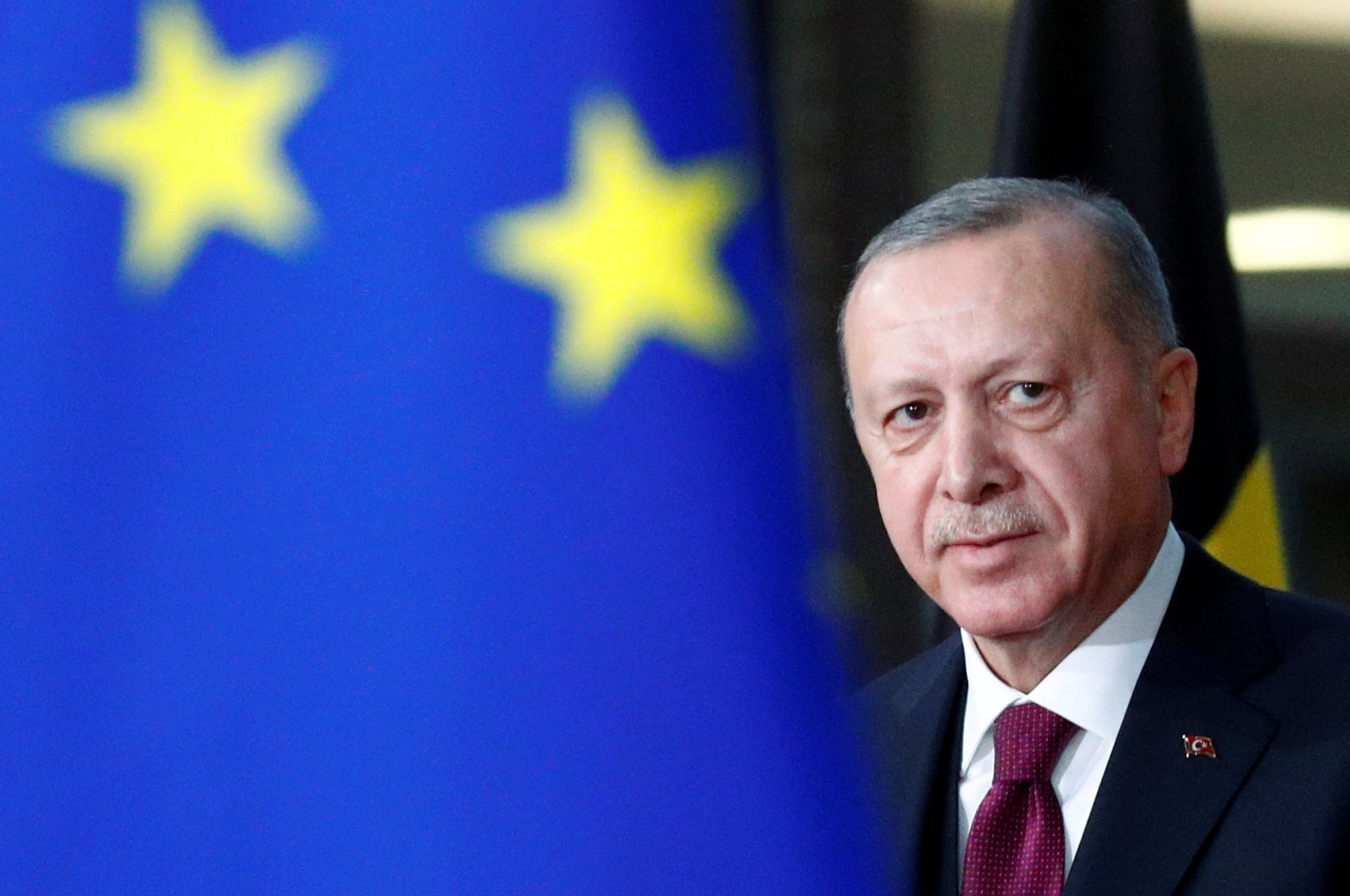 Ahead of the European Union leaders' summit to discuss the recent tensions in the Eastern Mediterranean, the Turkish president, German chancellor and European Council head expressed their determination to improve EU-Turkey relations and overcome regional conflicts

Turkey continually emphasizes dialogue and negotiations despite all provocations, President Recep Tayyip Erdoğan said Tuesday, underlining that reciprocal steps are needed to preserve the momentum gained in lowering tensions in the Eastern Mediterranean.

Erdoğan underlined that from now on, further negotiations will depend on the steps taken by Greece.

During the meeting where European Union-Turkey relations were comprehensively discussed, Erdoğan said he hoped the EU leaders’ meeting, which was scheduled for this week but was postponed, would bring a breath of fresh air to relations between Ankara and Brussels.

The EU summit has been postponed for a week because Michel has gone into quarantine after a close collaborator was diagnosed with COVID-19.

Erdoğan said if solid steps in goodwill toward the customs union agreement, visa exemption and migration deal are taken, EU-Turkey relations would once again gain a positive outlook.

Underlining that healthy cooperation between Brussels and Ankara would resolve regional problems, Erdoğan said he appreciated the efforts by Merkel and Michel to enhance relations.

Following the meeting, Greece also said it will resume exploratory talks with Turkey for the first time since 2016, as efforts to reduce recent tension between the NATO allies intensified.

"Greece and Turkey have agreed to hold... exploratory talks in Istanbul soon," the Greek foreign ministry said in a statement.

Addressing the 75th General Assembly of the United Nations, Erdoğan on Tuesday also proposed to hold a regional conference with all Mediterranean coastal states, including the Turkish Republic of Northern Cyprus (TRNC), in which the rights and interests of regional actors would be considered.

Erdoğan reiterated Turkey's call to establish dialogue and cooperation between the countries of the Eastern Mediterranean.

Emphasizing Ankara's support for Turkish Cypriots against the Greek Cypriot administration's uncompromising stances and unilateral actions, Erdoğan said: "We are proposing the holding of a regional conference in which the rights and interests of all states can be taken into consideration and where Turkish Cypriots are present too."

Turkey will not tolerate any imposition, harassment or attack in the Eastern Mediterranean, Erdoğan said, adding that Ankara has sought to solve the issues in the region through dialogue on an equitable basis and according to international law.

Meanwhile, military delegations from Turkey and Greece have met for the fifth time as part of a NATO-led initiative to discuss deconfliction mechanisms in the Eastern Mediterranean, security sources said Tuesday.

In a statement, the Turkish Defense Ministry said the delegations have completed the fifth round of talks at the NATO headquarters in Brussels and added that the next round is planned to be held next week.

The talks aim to reduce the risk of incidents and accidents in the region, like the ones that happened in August, while the two countries are involved in a dispute over access to natural resources in the Eastern Mediterranean.

A Greek and a Turkish warship were involved in a minor collision in August during a standoff in the Eastern Mediterranean, in what a Greek defense source called an accident but Ankara called a provocation.

The ministry noted that the next meeting is expected to be held next week.

Turkey on Tuesday declared a new navigational telex (Navtex) advisory in the Aegean Sea over Greece's violation of the demilitarized status of Lemnos Island, which is governed by the 1923 Treaty of Lausanne.

If the Greek president casts war rhetoric aside and embraces notions such as peace and consensus, it will benefit Athens, the Greek Cypriot administration and the whole region, Vice President Fuat Oktay said Tuesday.

Speaking on the ongoing tension between Turkey, Greece and the Greek Cypriot administration over maritime zones and drilling rights in the Eastern Mediterranean, Oktay touched upon statements made by Greek President Katerina Sakellaropoulou during her visit to the island of Kastellorizo (Megisti-Meis) last week and prior to her visit to the Greek Cypriot administration.

Criticizing the president's use of the word “occupant” toward Turkey, Oktay told Anadolu Agency (AA): “A solution to the Cyprus issue depends on Greece giving up on its Megali Idea and returning to reality. The situation being as such, the president’s statements are humorous and constitute a futile attempt at provocation and propaganda.”

The Megali Idea refers to the Greek expansionist policy that aims to revive the Byzantine Empire.

The vice president said that Sakellaropoulou made a show by visiting Kastellorizo, which lies 2 kilometers away from the Turkish mainland, accompanied by troops, ignoring the basic human rights and interests of Turkish Cypriots by following the visit with a trip to the Greek Cypriot administration.

“Greece and its president, which have openly voiced that Greek rule should be established (over the island) and that the existence of the Turkish Cypriots should be ended, claim that pressure and aggression are being further thrust upon them by the Turkish leadership,” Oktay said.

“Turkey is not an occupying force in Cyprus, but a country that prevented its occupation and annexation. Turkey went to Cyprus legitimately on July 20, 1974, upon the request of Turkish Cypriots, using its rights as a guarantor nation in line with the Zurich and London agreements,” the vice president added.

“The fact that there is no war and conflict in Cyprus since 1974 is thanks to Turkey only,” he added, saying that though Turkey actively supported the efforts regarding Cyprus, Greece sought to maintain the status quo, namely the deadlock.

During her visit to Kastellorizo, Sakellaropoulou argued that Turkey was "mounting pressure" on Athens.

"We are going through a difficult and dangerous period. The Turkish leadership ... is undermining the peaceful coexistence that has been built up over many decades by Greeks and Turks, who saw the sea between them not as an impenetrable frontier but as a passage of communication," Sakellaropoulou told reporters.

Turkey and Greece have been at odds over numerous issues, but the most recent issue of gas exploration in the Eastern Mediterranean has especially heightened tensions between the two neighbors.

Greece seeks to block Turkey's exploration of energy resources in the region, which Ankara says is well within its rights. Athens has sought to restrict Turkey's maritime territory, attempting to box it into its shores based on the proximity of a small number of Greek islands to the Turkish coast.

The country has been firm in declaring that Ankara and the Turkish Republic of Northern Cyprus (TRNC) have rights in the region. Ankara earlier said energy resources near the island of Cyprus must be shared fairly between the Greek Cypriot administration and the TRNC – which has issued Ankara's state oil company Turkish Petroleum (TPAO) a license for exploration.

The island of Cyprus has been divided since 1974 when a Greek Cypriot coup took place after decades of violence against the island's Turkish community and Ankara's intervention as a guarantor power. The TRNC was established in 1983 on the northern part of the island and is only recognized by Turkey. The country faces a longstanding embargo on commerce, transportation and culture.

It has seen an on-and-off peace process in recent years, including the latest initiative in Crans Montana, Switzerland under the auspices of guarantor countries Turkey, Greece and the U.K., but the process collapsed in 2017.