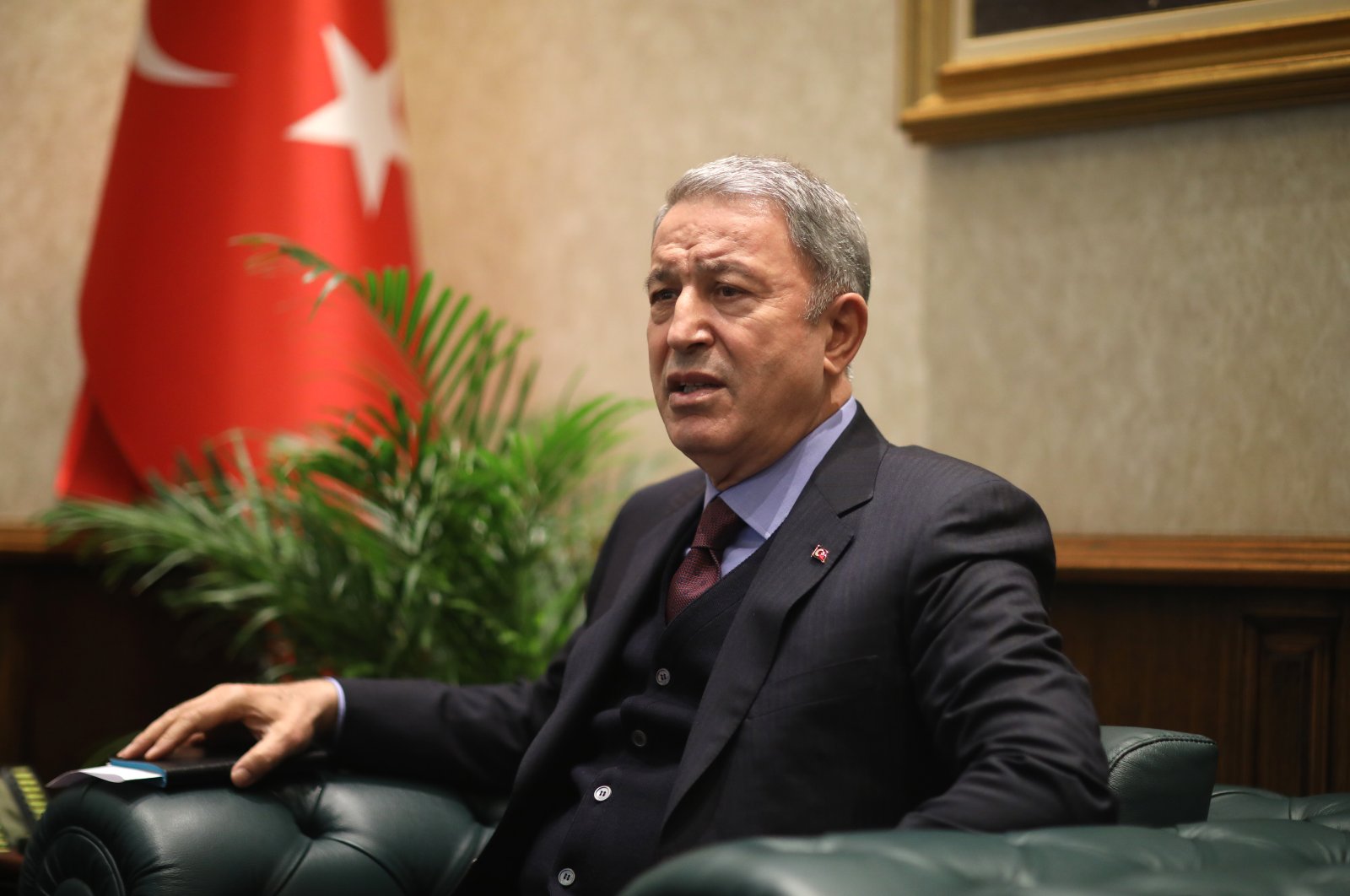 Turkey on Tuesday once again called on Greece to resolve the disputes between the two countries in the Eastern Mediterranean and hold exploratory as well as deconfliction talks.

"We believe that problems (between Turkey and Greece) can and should be resolved as part of negotiations," Defense Minister Hulusi Akar told Anadolu Agency (AA) ahead of a meeting with German Ambassador to Turkey Jurgen Schulz.

He underlined that Turkey has always been on the side of international law in the ongoing issues concerning the Eastern Mediterranean and the Aegean Sea. Akar said Ankara was prioritizing good neighborly relations, dialogue and negotiation.

"We expect, on the one hand, for exploratory talks to start, and on the other, for negotiations to begin under the measures for confidence and confidence-building, as well as the deconfliction talks following the meetings between our president (Recep Tayyip Erdoğan) and NATO Secretary-General Jens Stoltenberg," Akar said ahead of the meeting at the Defense Ministry in the capital Ankara.

Thanking Germany for its efforts toward securing peace and a resolution in the Eastern Mediterranean, he said Germany made very important contributions to this process.

Turkey and Greece have been at odds due to several issues. Turkey, which has the longest continental coastline in the Eastern Mediterranean, has rejected maritime boundary claims made by Greece and the Greek Cypriot administration. It has stressed that these excessive claims violate the sovereign rights of both Turkey and the Turkish Republic of Northern Cyprus (TRNC). Instead of opting to solve problems with Turkey through dialogue, Greece has, on several occasions, refused to sit at the negotiation table and opted to rally the European Union to take a tougher stance against Ankara.

"I'd also express that we expect all third parties to evaluate the problems between Turkey and Greece objectively," Akar said.

For his part, Schulz said they expected the tension to be resolved as soon as possible and that the best way for this would be mutual talks.

Turkish security sources said in early December that the technical talks on the details of a deconfliction mechanism between Turkey and Greece, scheduled for Nov. 30 at the NATO headquarters in Brussels, could not be held due to the absence of the Greek delegation.

NATO announced in September that, following a series of technical meetings between the military delegations of Greece and Turkey at the NATO headquarters, a bilateral military deconfliction mechanism had been established.

The mechanism is designed to reduce the risk of incidents and accidents in the Eastern Mediterranean and includes the opening of a hotline between Athens and Ankara to facilitate resolving conflicts at sea or in the air.

Although Turkey and Greece had agreed on the general principles of the deconfliction talks in October which were hailed by NATO's Stoltenberg as a "safety mechanism that can help to create the space for diplomatic efforts to address the underlying dispute," further talks were obstructed by the Greek side.

The two Mediterranean countries also expressed their willingness to hold exploratory talks in September, yet no concrete step has been taken.

The upcoming exploratory talks will be the 61st of their kind since the two countries began exploratory talks on issues in the Eastern Mediterranean on March 12, 2002. The talks have aimed to come up with a fair, sustainable and inclusive solution. These talks continued regularly up until 2016. However, there have not been any new rounds since, both due to the political conjecture and the Greek side's reluctance.

Turkey has demanded that the host of disagreements it has with Greece be handled as a whole. Those include territorial waters in the Eastern Mediterranean, the continental shelf, demilitarization of the islands, the legal status of geographical formations, the width of national air space, and search and rescue operations.

The country also rejects the one-sided steps by Greece in concert with the Greek Cypriot administration in the region, which, Turkey says, overlook the rights of the TRNC.