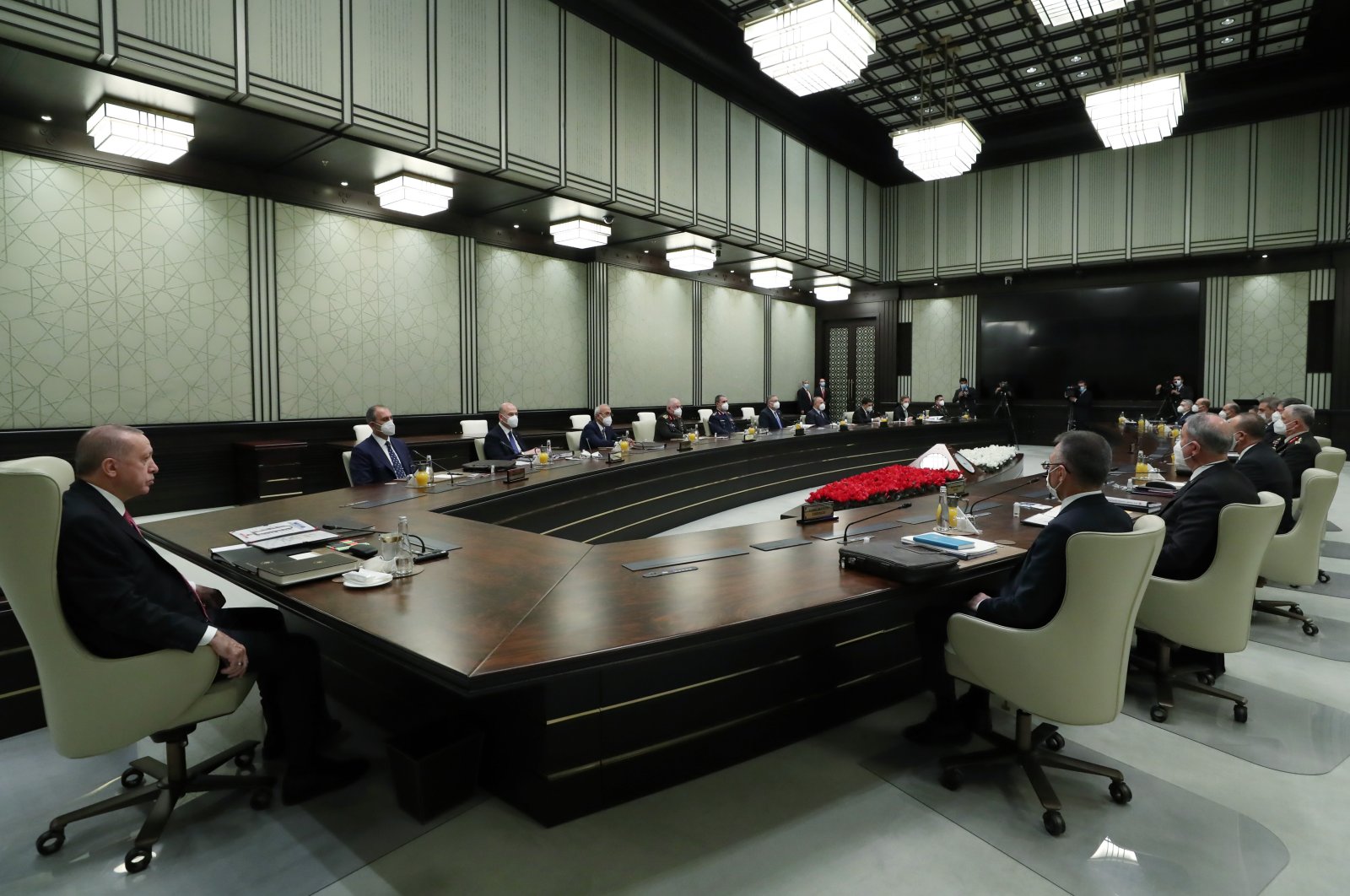 The council meeting under the chair of President Recep Tayyip Erdoğan lasted more than four hours in the capital Ankara and once again expressed Turkey’s disapproval and condemnation of the EU-led Operation Irini’s “unilateral” action which is against “international law” and “alliance relations,” according to a statement released after the meeting.

Turkey's Foreign Ministry on Monday also protested the illegal interception of the Libya-bound Turkish vessel during the European Union-led Operation Irini in the Eastern Mediterranean.

"Operation Irini is a sided operation. It is an operation that aims to punish the legitimate Libyan government and does not inspect arms supplies to the putschist Gen. Khalifa Haftar, and is involved in arbitrary practices," ministry spokesperson Hami Aksoy said Monday.

A German frigate participating in the EU-led Operation Irini unlawfully stopped and searched a commercial Turkish cargo vessel, carrying food and paint supplies to Libya, in the Eastern Mediterranean, security sources said. Footage obtained from the interception showed armed soldiers boarding the ship in a manner that resembled a counterterrorism operation. Confirming a report in the news magazine Der Spiegel, a German spokesman said the Hamburg frigate had intercepted the ROSELINE A about 200 kilometers (125 miles) north of the Libyan city of Benghazi on Sunday night.

Aksoy noted that the Turkish vessel's captain cooperated with Operation Irini forces and shared extensive information about the vessel’s cargo and navigation but faced an hourslong inspection despite their cooperation.

"All the staff was detained and the captain was held at gunpoint by soldiers during the inspection," Aksoy said. He added that the search was conducted without the approval of the vessel's country of origin. He continued by noting that the intervention only ended after Turkey's insistent objection to the unlawful search.

Operation Irini, approved by EU foreign ministers on March 31, aims to operate in the air and sea and with satellites to ensure that all countries respect a ban on providing arms to the parties involved in the Libyan conflict. Seven countries are participating in Operation Irini, named after the Greek word for peace, including Italy, Greece, France, Germany, Poland, Malta and Luxembourg, with frigates and maritime patrol aircraft.

Although the operation aims to enforce the U.N. arms embargo on Libya's warring sides, it mainly focuses on maritime activities in the Mediterranean, while Haftar's side – the enemy of the legitimate Libyan administration – continues to receive arms and ammunition mainly by air and land, according to Libyan Prime Minister Fayez Sarraj. Russia and the United Arab Emirates (UAE) have been providing arms and military equipment to Haftar's forces.

The council statement also underlined that Turkey will never allow a terror corridor to be established near its southern borders, referring to the presence and activities of the PKK terror group's Syrian branch YPG in the region.

The council also discussed the issues of the Nagorno-Karabakh conflict and the Cyprus issue. While it said that the impositions from parties who do not recognize the presence of two different nations and states on the island and ignore the existence of Turkish Cypriots will not be accepted for the solution of the issue, it also stated Turkey's satisfaction over brotherly Azerbaijan's liberation of occupied territories in the Nagorno-Karabakh conflict.

The island of Cyprus has been divided since 1974 when a Greek Cypriot coup took place after decades of violence against the island's Turkish community, provoking Ankara's intervention as a guarantor power. The Turkish Republic of Northern Cyprus (TRNC) was established in 1983 on the northern tier of the island and is only recognized by Turkey. The country faces a longstanding embargo on commerce, transportation and culture.

Armenia agreed to hand over three districts around Nagorno-Karabakh, namely Aghdam, Kalbajar and Lachin, as part of the deal that stopped an Azerbaijani operation that had reclaimed swathes of territory lost to Armenian separatists in a 1990s war.