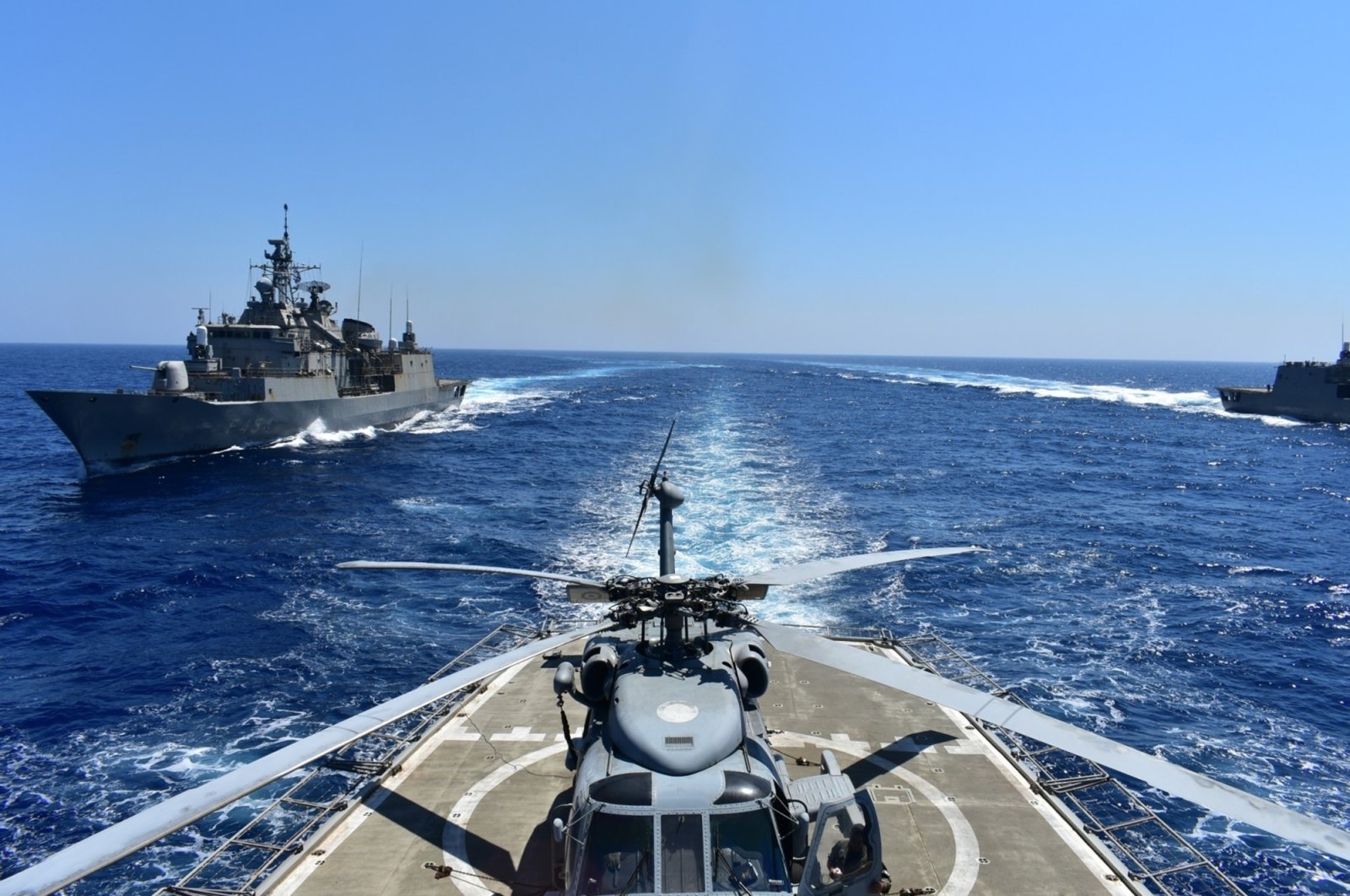 The U.S. has been increasingly voicing support for Greece and the Greek Cypriot administration while engaging in frequent contact with the two Eastern Mediterranean countries, ignoring Turkey's calls for neutrality

U.S. Secretary of State Mike Pompeo will visit Greece and one of its naval bases on the island of Crete next week in a show of support, overlooking Turkey’s recent calls for Washington to return to its position of neutrality on tensions in the Eastern Mediterranean.

In Greece, Pompeo will meet with Greek Prime Minister Kyriakos Mitsotakis and Foreign Minister Nikos Dendias "to renew our shared commitment to advance security, peace and prosperity in the Eastern Mediterranean and celebrate the strongest U.S.-Greek relationship in decades," department spokeswoman Morgan Ortagus said in a statement.

He will also travel to Souda Bay on the Greek island of Crete. There he will visit the U.S. naval facility "to underscore the strong U.S. security partnership with NATO Ally Greece," Ortagus said.

Athens and Washington carried out military drills in the region on July 24-28, a move that U.S. Capt. Zoah Scheneman said, “Flexed our ability to be postured with our NATO partners to be ready with credible force to assure, deter and defend our interests in an increasingly complex security environment.”

Earlier this month, Pompeo discussed Eastern Mediterranean tensions during a visit to the south side of Cyprus. He conveyed messages encouraging cooperation even after the U.S. lifted a decadeslong arms embargo on the Greek Cypriot administration, a move Turkey said was disrupting “equality and balance” between the Turkish Cypriot and Greek Cypriot communities on the ethnically divided island nation.

“We think that taking steps that damage the neutral position of the U.S. will not benefit the peace in the region,” ruling Justice and Development Party (AK Party) spokesperson Ömer Çelik said late Tuesday after a Central Decision and Executive Board meeting at party headquarters in the capital Ankara.

But the tone has recently softened between Ankara and Athens, with the two agreeing Tuesday to begin exploratory talks on their dispute.

The two countries have also engaged in NATO-led talks to discuss deconfliction mechanisms in the Eastern Mediterranean. The fifth round of talks took place last week while the next is expected to be held next week. The talks aim to reduce the risk of incidents and accidents in the region.

NATO Secretary-General Jens Stoltenberg and Mitsotakis on Thursday discussed the recent developments in the region.

"As part of his regular consultations with Greek and Turkish leaders, NATO Secretary General Jens Stoltenberg spoke by telephone with Greek Prime Minister Kyriakos Mitsotakis on Thursday about the Eastern Mediterranean," a NATO statement said.

"The Secretary-General welcomed the recent announcement that Greece and Turkey will hold exploratory diplomatic talks. He stressed the importance of resolving the situation in a spirit of Allied solidarity and in accordance with international law," it added.

The upcoming exploratory talks will be the 61st of their kind, as the two countries started to hold exploratory talks on problems in the Eastern Mediterranean on March 12, 2002, with an aim to come up with a fair, sustainable and inclusive solution.

These talks continued regularly up until 2016. However, since then there have not been any new rounds, both due to the political conjecture and the Greek side's reluctance.

Turkey has demanded that the array of disagreements it has with Greece be handled as a whole. Those include territorial waters in the Eastern Mediterranean, the continental shelf, demilitarization of the islands, the legal status of geographical formations, the width of national air space and search and rescue operations.

The Greek Cypriot administration is committed to peace talks with the TRNC but not at gunpoint, Greek Cypriot leader Nicos Anastasiades said Thursday regarding a dispute which has deepened Greece-Turkey tensions and stymied European Union policymaking on Belarus.

"For the (Cyprus peace) talks to resume with realistic prospects for success, it is imperative to create an environment which will be conducive for constructive and good faith negotiations ... not under conditions of intimidation or threats," Anastasiades said in an address to the United Nations General Assembly.

A simmering decades-old conflict that split the East Mediterranean island's Greek and Turkish inhabitants has come full circle with the issue featured prominently in disputes between NATO allies Greece and Turkey, which are now holding up EU plans to impose sanctions on Belarus, as some members call for the bloc to impose similar measures on Turkey.

The Greek Cypriot administration’s stance has drawn criticism from some EU countries, which say it amounts to protecting Belarusian President Alexander Lukashenko, who is accused of rigging elections and using force to quell peaceful protests, while the delay has upset plans for coordinated Western action.

Anastasiades stated that his administration was willing to place any revenues from gas exploration into an escrow account for the Turkish Cypriot community.

EU leaders will look for ways to defuse tensions at a summit on Oct. 1-2.

Turkey last week voiced that there exists no common ground and vision for a settlement between the two sides on the island. All past negotiation processes have failed due to the fact that the Greek Cypriot administration has not accepted the political equality, which is a requirement for a partnership on the island, and that this could not be defined in a concrete way, a Foreign Ministry statement said. The statement cited the underlying reason as the Greek Cypriots' unwillingness to share both power and natural resources with the Turkish Cypriots.

The island of Cyprus has been divided since 1974 when a Greek Cypriot coup took place after decades of violence against the island's Turkish community and Ankara's intervention as a guarantor power. The TRNC was established in 1983 on the northern tier of the island and is only recognized by Turkey. The country faces a longstanding embargo on commerce, transportation and culture.

Cyprus has seen an on-and-off peace process in recent years, including the latest initiative in Crans Montana, Switzerland, under the auspices of guarantor countries Turkey, Greece and the U.K., but the process collapsed in 2017.