EU calls for cease-fire in Libya, exit of foreign forces 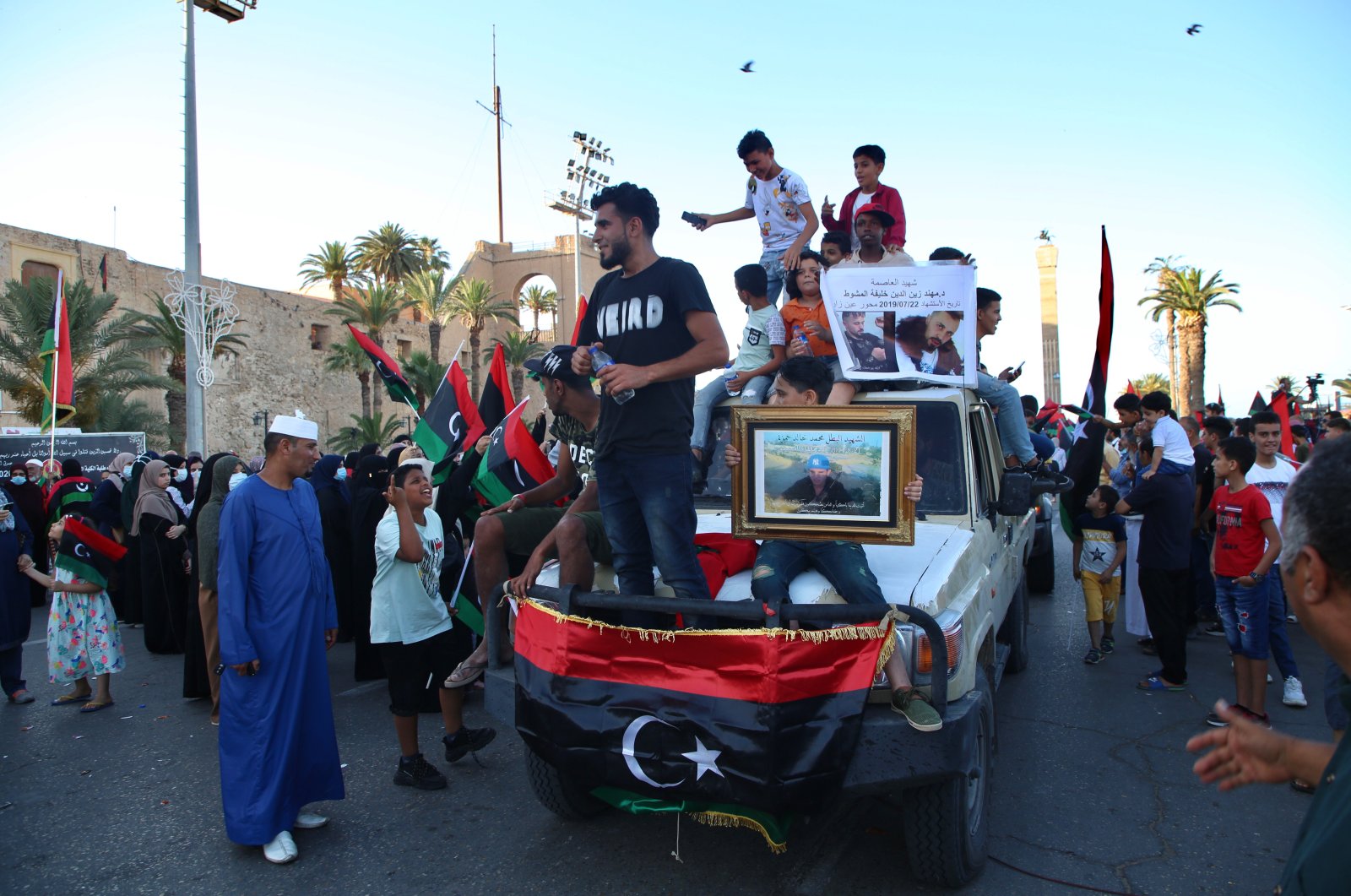 People celebrate with Libyan national flags in the capital Tripoli's Martyrs' Square after fighters loyal to the U.N.-recognized Government of National Accord (GNA) captured the town of Tarhuna, June 5, 2020. (AA Photo)
by DAILY SABAH WITH AGENCIES Jun 10, 2020 11:47 am

EU members urged all members of conflict to end operations and engage in peace talks, while Haftar forces retreated due to the Libyan Army's advance toward Sirte

The European Union called on all parties involved in the Libyan conflict to end military operations and engage in peace talks in a joint statement signed Tuesday by EU foreign policy chief Josep Borrell and the foreign ministers of France, Germany and Italy.

The document addresses international actors as well, urging the "withdrawal of all foreign forces, mercenaries and military equipment supplied."

The European ministers also insisted on the need to "engage constructively in the five-plus-five negotiations" in reference to a joint military commission that helped broker a cease-fire announced in Cairo earlier this month.

A political initiative was agreed to on Saturday between Egypt's Abdel Fattah el-Sissi, the speaker of the east Libya-based parliament Aquila Saleh and putschist Gen. Khalifa Haftar.

Neither the members of Libya's internationally recognized Government of National Accord (GNA) nor their international allies were present at the conference in Cairo.

However, the EU statement describes the Cairo Declaration as "constructive commitments to halt the fighting, resume dialogue and reach a cease-fire within" the Berlin process."

Last year, several high-level meetings were held in the German capital to put an end to the Libyan conflict, with the participation of France, Italy, Germany and the United Kingdom.

The negotiations are known as the Berlin peace process.

According to the European Union, this U.N.-backed negotiation procedure is the only acceptable way forward because it is based on peaceful and multilateral talks.

The joint statement followed increased diplomatic efforts by Germany to push for a political solution to the Libya crisis.

Chancellor Angela Merkel earlier on Tuesday expressed her concern in a telephone call with Russian President Vladimir Putin over the recent escalation of fighting in Libya.

On Monday, Merkel also discussed the situation in conflict-wracked Libya with Sissi. Merkel told Sissi that U.N.-backed negotiations must remain the key aim of a peace process in Libya.

Following the ouster of late ruler Moammar Gadhafi in 2011, Libya's new government was founded in 2015 under a political deal led by the United Nations.

The government and the western parts of the country have been under attack by Haftar's forces since April 2019. Haftar is supported by Egypt and the United Arab Emirates as well as Russia.

In March, the Libyan government launched Operation Peace Storm to counter attacks on the capital and recently regained strategic locations, including al-Watiya air base and the strategic city of Tarhuna.

The Libyan Army has made significant military gains against Haftar's militias in recent days, capturing all the cities west of Libya down to the borders with Tunisia.

On Saturday, the army launched another military operation to liberate cities of eastern and central Libya from Haftar's forces, one day after capturing Tarhuna – the last stronghold of Haftar in western Libya.

As Turkish military support helped drive Haftar forces back from Tripoli this month, Russia was said to be reinforcing the forces with warplanes, raising the stakes in a stalemated civil war that has partitioned the African country.

President Recep Tayyip Erdoğan on Tuesday also reiterated his country's support for the Libyan government in its fight against Haftar.

The descendants of Libya's anti-colonial hero "Lion of the Desert" Omar Mukhtar defeated at the gates of Tripoli "legionaries" sent from all over the world by "those who would try to occupy" the country, Erdoğan told a press conference following a roughly three-hour Cabinet meeting in the capital Ankara.

"We will stand next to our Libyan brothers, not the putschists, not the imperialists," Erdoğan said, referring to Haftar and his supporters.

Erdoğan underlined that in the coming period, Ankara would "continue to frustrate both domestic and foreign coup enthusiasts and lovers of terrorist organizations."

"We'll continue to support our Libyan brothers until peace, tranquility and justice are established throughout Libya," he said.

Turkey will offer knowledge and experience in all areas from health to transportation and from energy to defense, to benefit the Libyan people, he added.

Airstrikes on Haftar positions in Sirte

On the field, the Libyan Army’s advance toward the strategic city of Sirte continues. Most recently, government forces targeted the positions of Haftar militias in the region with airstrikes.

Military spokesperson Mohammed Qanunu announced that airstrikes targeted Haftar forces and mercenaries fighting for them. He also added that they will not give up their aim of recapturing the control over Sirte.

Gen. Ibrahim Baytalmal, commander of the drive which made rapid progress on Saturday toward the coastal city, 450 kilometers (280 miles) east of the capital, insisted the target was well within reach.

"We are just a few kilometers from Sirte," the general said late Monday on the GNA's Facebook page. "Its liberation is only a matter of time, but we hope we can save its people from the horrors of war."

In line with the course of the conflict in Libya, powerful tribes of the country have started to switch their sides, too.

Tuareg tribes in Ubari, the capital of the Wadi al Hayaa District in the Fezzan region of southwestern Libya, announced their loyalty to the GNA forces and condemned Haftar’s agenda.

In the Libyan conflict, powerful tribes have played a key role since the beginning. Tuareg tribes announced their loyalty to Haftar in February 2019.

In response to the GNA's advance, Haftar forces target residential places in Sirte. Scores of families have been forced to flee their homes due to shelling by Haftar forces in recent days.

A video aired by the private February channel showed dozens of families while leaving Wadi al-Jarf area, west of Sirte.

The Mediterranean coastal city is also a gateway to the country's major oil fields in the east, still held by pro-Haftar forces.

Oil, the lifeline of Libya’s economy, has long been a key factor in the civil war, as rival authorities jostle for control of oil fields and state revenue. Libya has the ninth-largest known oil reserves in the world and the biggest oil reserves in Africa.

Armed groups stopped oil production at the Sharara field on two occasions in just 24 hours, the corporation said. Hours after one military commander allowed the oil to start flowing again, another group stormed the field and shut the valves. The company said that force majeure – a contract clause that refers to the inability of the company to meet its obligations because of extraordinary events – remains in effect.

The National Oil Corporation said Brig. Mohammed Khalifa, the commander of the oil facilities guard force in the country’s south, which answers to Haftar, disrupted operations at the Sharara oil field, about 900 kilometers (560 miles) south of Tripoli.

It said it instructed the employees to reject "any military orders" regarding the operating and maintenance of the field. Two engineers at the field said they had halted operations early Tuesday, and the field had shut down. Later, an oil engineer said production had resumed, only to be cut off once again. They spoke on condition of anonymity because they were not authorized to brief the media.

The oil company had previously announced the resumption of production at the Sharara field, following negotiations with the tribes to end its closure, in place since January. The production also resumed on Monday in the al-Feel oil field, it said.

Tuesday’s shutdown marked the 20th time that production at Libya’s largest oil field has been disrupted since the beginning of the NATO-backed uprising and civil war erupted in Feb. 2011, said Hamish Kinnear, a Middle East and North Africa analyst at Verisk Maplecroft.

The reopening of the field was the first major challenge to Haftar’s forces in the area, he said.