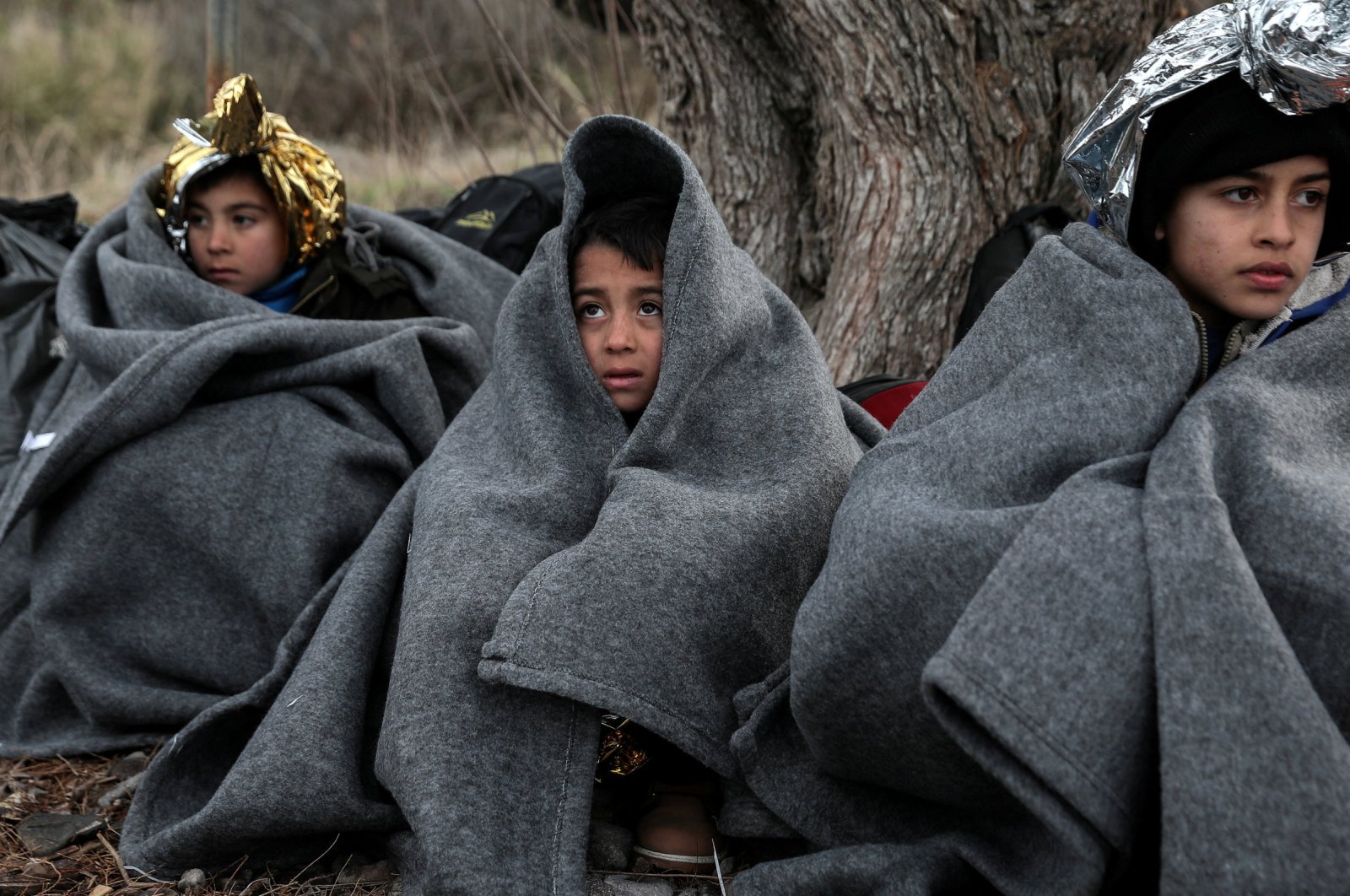 Children are covered with blankets and thermal blankets after migrants from Afghanistan arrived on a dinghy on a beach near the village of Skala Sikamias on the island of Lesbos, Greece, Feb. 28, 2020. (Reuters File Photo)
by Daily Sabah with DPA Jul 05, 2020 9:53 am
Edited By Nurbanu Tanrıkulu Kızıl
RECOMMENDED

A senior official tasked with drawing up the European Commission's much-anticipated proposal to overhaul the bloc's politically explosive and strained migration system says the plan will likely only be ready in autumn.

"I am ready to present the Pact on Migration and Asylum when this time comes, probably in September," she said. This would be months later than the EU's executive arm initially hoped.

Proposing the pact and getting the 27 deeply divided EU capitals to agree on it is arguably the most crucial and challenging task in Johansson's portfolio. The latter job is expected to run into 2021, according to the senior official.

For years, southern EU states have charged fellow bloc members with a lack of solidarity as many refuse to take in a fixed share of some of the tens of thousands of migrants that reach the EU via the Mediterranean Sea each year.

At present, the so-called Dublin Pact system stipulates that asylum seekers must make their application in the EU country where they first arrive – a system that puts great pressure on Greece, Italy, Spain and Malta.

"It is a tough task," Johansson says. "The former commission's proposals were never fully accepted."

Vienna, Budapest and Prague are among those who oppose mandatory redistribution quotas.

Johansson told DPA she is "optimistic" after talks with each member state. "I think everyone realizes that there must be a compromise. This is how Europe works."

Turkey and Greece have been key transit points for asylum-seekers, refugees and migrants seeking to cross into Europe to start new lives, especially those fleeing war and persecution. Greece's response to those trying to enter the country without prior authorization has been harsh. Turkish officials said earlier last month that the Greek coast guard had pushed back migrants and had attempted to sink boats carrying migrants and refugees heading toward the Greek islands by opening fire and hitting the people on the boats with long sticks.

To save the migrants from the dangers of the illegal route, Turkey's Coast Guard Command has been working hard on the shores, rescuing migrant boats nearly every day.

The EU had pledged 6 billion euros ($6.74 billion) in aid for the refugees.

Turkey is the largest host country for Syrian refugees and provides protection to more than 3.5 million people who have fled the neighboring country. The EU Facility for Refugees in Turkey supports refugees and host communities by financing projects in education and health care as well as projects that improve the infrastructure and develop the economy.

Currently, 95 EU-funded projects in Turkey are benefiting 1.7 million refugees, including 500,000 children. An additional 25 contracts are expected to be signed in the coming months. Facility projects will continue to be rolled out with the first generation of projects finishing in 2021 and the second in 2025, at the latest.

Negotiations are still ongoing for a new financial envelope for Syrian refugees in Turkey for the period after 2025.

To reduce the number of illegal migrants on the dangerous Aegean Sea route and to find a solution for the influx of refugees heading to the European bloc, Turkey and the EU signed an agreement in March 2016.

According to the deal, Turkey was promised a total of 6 billion euros in financial aid, which was initially designed to be given to the country in two stages and to be used by the Turkish government to finance projects for Syrian refugees. Visa freedom for Turkish citizens was also to be provided under the agreement. Lastly, the customs union was also to be updated under the deal.

In exchange for these promises, Turkey took the responsibility of discouraging irregular migration through the Aegean Sea by taking stricter measures against human traffickers and improving the conditions of Syrian refugees living in Turkey.

Although the first stage of funding was provided to Turkey, the EU has yet to fulfill other articles such as the visa-free deal for Turkish citizens and updating the customs union. Turkey currently hosts more Syrian refugees than any other country in the world. Ankara has so far spent $40 billion on the refugees, according to official figures.