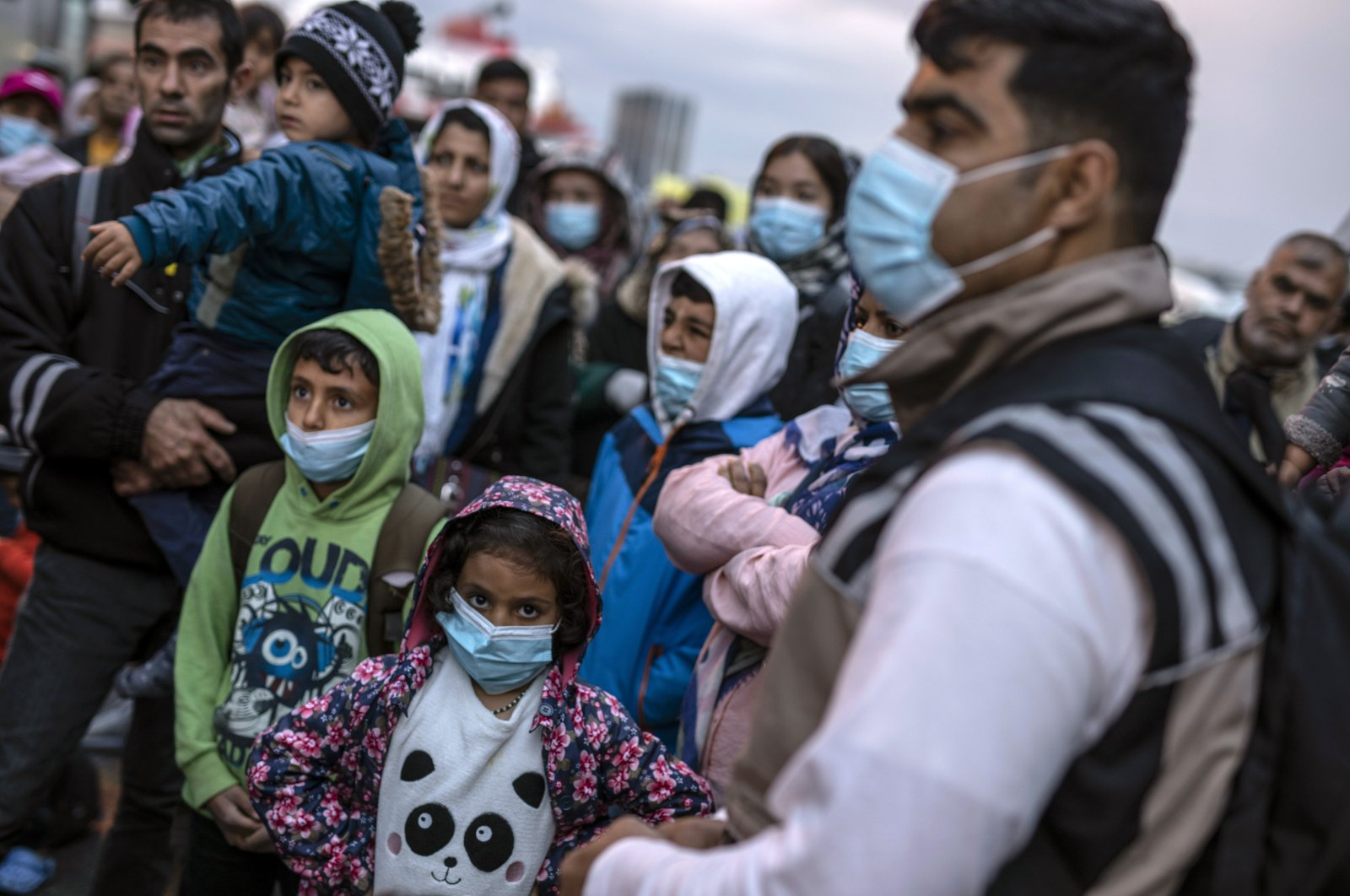 Refugees and migrants wearing masks to prevent the spread of the coronavirus, wait to get on a bus after their arrival at the port of Piraeus, near Athens, May 4, 2020. (AP Photo)
by DAILY SABAH WITH AGENCIES Aug 04, 2020 12:52 pm
Edited By Nurbanu Tanrıkulu Kızıl
RECOMMENDED

Greece has seen fewer migrants and refugees arriving from Turkey, numbering only in the hundreds in the last four months, mainly due to increased border checks and partly due to the coronavirus pandemic, a government minister said Tuesday.

Alternate Migration Minister George Koumoutsakos spoke before visiting camps on the island of Lesbos with the premier of the German state of North Rhine-Westphalia, Armin Laschet.

In March, tensions between NATO allies Greece and Turkey, which disagree on a range of issues, rose a notch when thousands of refugees hosted by Turkey tried to storm the border into Greece and the European Union.

"The reduced flow won't allow us to rest. On the contrary, it imposes the (need) for continued vigilance," Koumoutsakos said.

More than 1 million people fleeing conflict reached Greek shores from Turkey in 2015 and 2016.

From April to July, Greece recorded 850 arrivals, down from 12,363 in the same period last year. Tens of thousands are still trapped in overcrowded migrant camps on their islands.

Turkey, home to 3.6 million Syrians, the world's largest refugee population, had said it would open the frontier because it was alarmed by the prospect of another wave of refugees fleeing war in northwest Syria.

"There will be strict controls but they are not prisons," Koumoutsakos said. "Greece does not build prisons. It's a democratic European state which protects its borders as well as human rights."

Reports suggest that Greek forces reject migrants, refugees and asylum-seekers both by land and by sea and in some cases, torture and mistreat them, seize their personal belongings, put their lives at risk and even cause their deaths.

Over 70,000 migrants and refugees have been pushed back to Turkey by Greece.

The United Nations High Commissioner for Refugees (UNHCR), the International Organization for Migration (IOM), the Council of Europe, the European Parliament (EP) and human rights groups have all strongly criticized Greece's pushbacks and demanded investigations of the incidents.

The European Parliament's Committee on Civil Liberties, Justice and Home Affairs has asked Athens to explain the pushbacks and its members have also called for an investigation.

On July 6, Ylva Johansson, the EU commissioner for home affairs, said there had been numerous reports of asylum-seekers being pushed back by Greece.