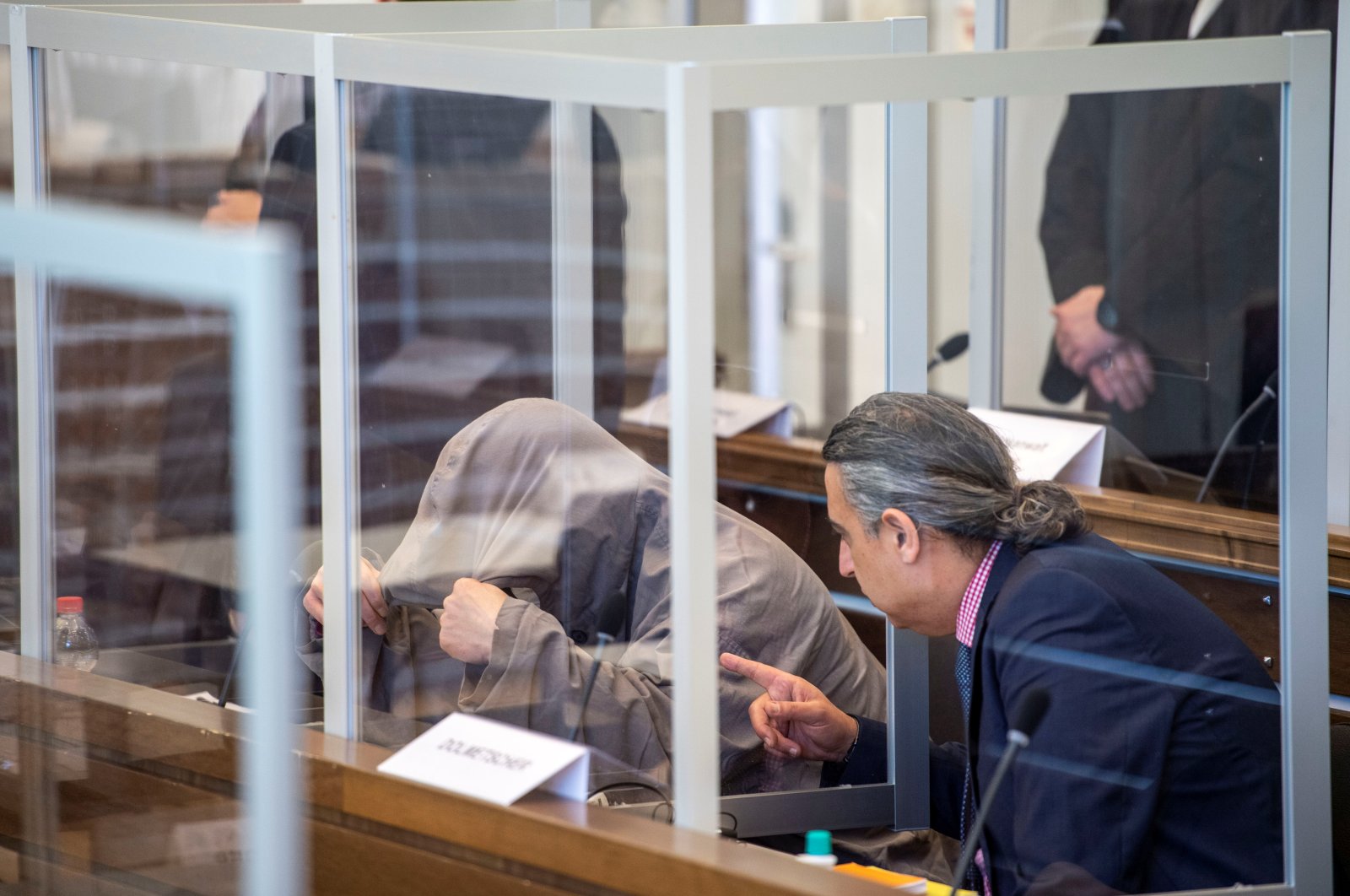 Syrian defendant Eyad A. hides himself under his hood prior to the first trial of suspected members of Syrian regime's security services for crimes against humanity, in Koblenz, Germany, April 23, 2020. REUTERS
by compiled from agencies Apr 23, 2020 11:51 am
RECOMMENDED

For the first time over the course of the decadelong Syrian civil war, former Bashar Assad regime officers are going on trial in Germany for crimes against humanity, paving the way for the regime's victims to finally find justice.

Prime suspect Anwar Raslan, an alleged former colonel in the Syrian regime's security services, stands accused of carrying out crimes against humanity while in charge of the Al-Khatib detention center in Damascus.

Fellow defendant Eyad al-Gharib, 43, is accused of being an accomplice to crimes against humanity, having helped arrest protesters and deliver them to Al-Khatib in the autumn of 2011.

Like hundreds of thousands of others, the two men both fled their country, applying for asylum in Germany, where they were arrested in February 2019.

"This trial is the first occasion in which (victims) are speaking out, not only in public but before a court, about what happened to them and what is still happening in Syria," said Wolfgang Kaleck, founder of the European Center for Constitutional and Human Rights (ECCHR), a Berlin-based legal group supporting the plaintiffs.

Raslan and Gharib are to be tried on the principle of universal jurisdiction, which allows a foreign country to prosecute crimes against humanity.

The German attorney general says the trial, which is taking place in the city of Koblenz, constituted the "first criminal trial worldwide of members of the Assad regime for crimes against humanity."

Such atrocities can be tried in Germany even if they have taken place outside the country and the victims were not German.

According to the German Judges' Association, the attorney general is currently investigating 100 suspected crimes against humanity, including in Syria, Iraq, Libya, Afghanistan, Mali, Nigeria, the Gambia, Ivory Coast and the Democratic Republic of Congo.

This is the only way to bring the perpetrators of Syrian regime crimes to justice, as the International Criminal Court is hamstrung by vetoes from Russia and China, the ECCHR claimed.

Everything started when Anwar al-Bunni crossed paths with fellow Syrian national Anwar Raslan in a DIY store in Germany five years ago, and recognized him as the man who had thrown him in jail a decade earlier. The two men arrived in Berlin within two months of each other and crossed paths when they were briefly staying in the same center for asylum-seekers. For Bunni, speaking to Agence France-Presse (AFP) in Berlin, the trial will send "an important message" to the Assad regime: "You will never have impunity, so think about it!"

While Bunni will not be one of the plaintiffs in Thursday's trial, he is a respected figure in Germany's 700,000-strong Syrian community and has convinced numerous victims to come forward.

In 2016, when he started working with local lawyers, Bunni learned that German investigators already had their eye on Raslan, who was arrested in February 2019.

The court is expected to hear testimonies from victims who survived what prosecutors say were "inhuman and degrading" conditions at Al-Khatib, before later escaping to Europe.

The prison's inmates, many of whom were arrested for taking part in pro-democracy demonstrations during the Arab Spring in 2011, were beaten with "fists, wires and whips" and subjected to "electric shocks," prosecutors claimed.

Others were "hung by their wrists so that only the tips of their toes were touching the ground" and "continued to be beaten in this position" or else "deprived of sleep for several days."

Such "brutal acts of psychological and physical abuse" were intended to extract "confessions and information about the (Syrian) opposition," the charge sheet added.

Some have suggested that Raslan was not just a pawn of the regime, noting that he reportedly defected to the opposition in 2012 before arriving in Germany two years later

Yet ECCHR's Kaleck insists that the 57-year-old was not "any old prison guard," but rather someone who, according to prosecutors, had a position of authority in the apparatus of the Syrian regime.

Previously, a former Syrian army photographer known by the pseudonym "Caesar" fled the country in 2013, taking with him some 55,000 photographs documenting abuse and torture.

The dossier is being used by international bodies, including the United Nations, as part of an investigation into the regime's role in "mass torture."

If convicted, Raslan faces life imprisonment. Gharib could be sentenced to up to 15 years in prison if convicted of complicity in crimes against humanity.

Raslan and Gharib's lawyers declined to give a comment ahead of the trial, which is expected to last until at least August.

Assad himself, however, defended Raslan against the accusations when he was asked about the trial in an interview with Kremlin-backed Russian broadcaster RT.

"We never believed that torture could make the situation better as a regime, very simple. So we don't use it," said the Syrian regime head, who has ruled the country with an iron fist for 20 years.

Yet according to the Syrian Observatory for Human Rights, at least 60,000 people have been killed under torture or as a result of the terrible conditions in Assad's detention centers.

Torture by the Bashar Assad regime forces made up 14,070 of this number, including 173 children and 45 women. The report stressed that the figures consisted of only those that can be identified and that the real death toll is much higher.

In February 2016, U.N. investigators said: "The mass scale of deaths of detainees suggests that the government of Syria is responsible for acts that amount to extermination."