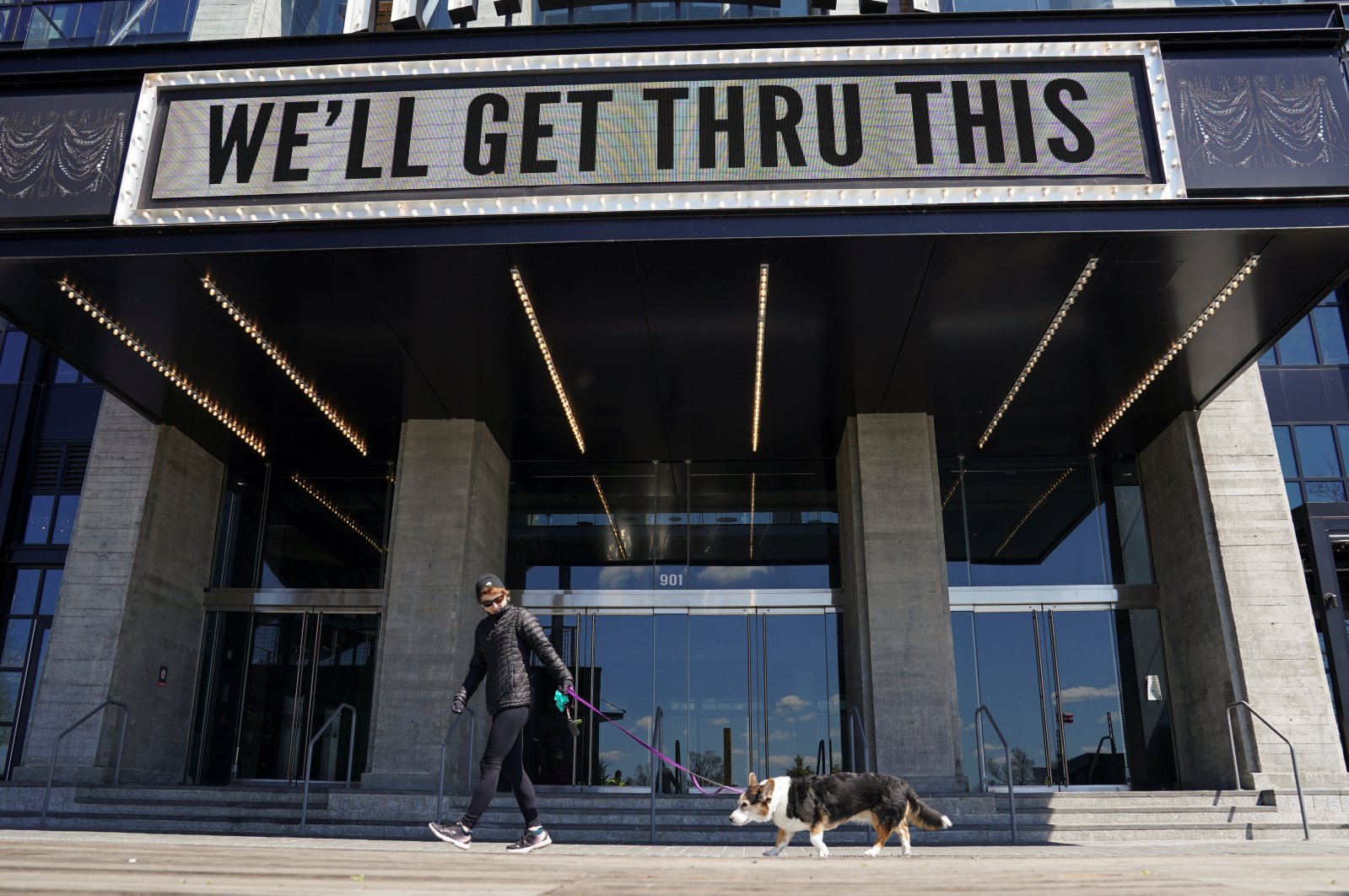 A woman walks her dog under the marquee at The Anthem music venue reading "We'll Get Thru This" referring to the battle against the coronavirus disease (COVID-19) pandemic, in Washington, U.S., Thursday, April 2, 2020. REUTERS
by DAILY SABAH Apr 02, 2020 11:39 pm
RECOMMENDED

A global challenge requires a global response, first on the public health front and then in the economy, said Foreign Minister Mevlüt Çavuşoğlu on Thursday, adding that the response should continue over the long haul in reforming international institutions and the way countries support them.

Writing an article for the Washington Times titled "What we do today will define tomorrow," Çavuşoğlu mentioned the coronavirus, its effects on the global system and how to properly respond to it.

"The top priority is to protect the health and safety of people from COVID-19," Çavuşoğlu said, adding that Turkey supports the G-20's stance in this matter.

Expressing that the G-20 is proving again to be the right format for global crisis management, the foreign minister referred to the recent G-20 statement as an exemplary move.

"We support the timely G-20 statement through which the leaders committed to act in solidarity in the fight against the pandemic and safeguard the global economy and unrestricted trade," he underlined.

Releasing a statement following a meeting conveyed via videoconference last week, G-20 countries pledged to do whatever it took to overcome the coronavirus pandemic. The countries underlined that tackling the pandemic and its intertwined medical, social and economic impact was their "absolute priority." The statement also added that the countries would be committed to presenting a united front against the coronavirus.

"We commit to take all necessary health measures and seek to ensure adequate financing to contain the pandemic and protect people, especially the most vulnerable," the statement says. "We task our health ministers to meet as needed to share national best practices and develop a set of G-20 urgent actions on jointly combatting the pandemic by their ministerial meeting in April."

Pointing at the pandemics' influence over the global system, Çavuşoğlu said that it was in tatters even before humanity was struck by the coronavirus.

"Turkey for one had been making the case that we needed to reform the system. We called it 'the world is larger than five' agenda, referring to the outdated composition of the U.N. Security Council but not stopping there," he reminded.

President Recep Tayyip Erdoğan often criticizes the U.N., saying that the current structure of the organization is an obstacle to resolving ongoing problems around the world. The president critiqued the fact that these countries can block crucial international decisions regarding various delicate matters, calling for significant U.N. reform.

With the saying, "The world is bigger than five," Erdoğan has long chastised the U.N. structure that has continued since World War II. He has been consistently voicing this in his addresses to the U.N. General Assembly. This situation already reveals that the U.N. is a status quo institution and a structure that created institutions and mechanisms legitimizing the order established after World War II and maintained under U.S. hegemony.

Erdoğan has previously said that major decisions should not be left to the mercy of five members only, but rather, countries should alternate and the number of members sitting at the U.N. Security Council should be increased to around 20.

"As a country that had to address unending conflicts and human misery in our close neighborhood and home to the largest refugee population in the world, we have known that the system was not working," the foreign minister further elaborated on Turkey's stance on the issue.

Emphasizing that many countries, including Turkey, have been taking individual measures against the crisis, Çavuşoğlu underscored that still, individual efforts would not suffice.

"The relevant international institutions should assume an effective role in financial and medical equipment assistance. Protection of fragile communities, irregular migrants and refugees, and support to host countries are even more important now," he highlighted.

In Çavuşoğlu's opinion, ending any and all conflict is a must in such situations that the world has been going through right now.

"A cross-cutting theme in the much needed global response is ending the conflicts that exact a very heavy toll on the humans, ecosystem, economy and our conscience. We, therefore, call on the international community to step down in all conflicts, cease hostilities, and search earnestly for dialogue and reconciliation including in the Middle East," he said.

"The seeds we sow today will soon confront us as full-blown realities," the foreign minister continued, "The reality of a rules-based global system, a network of functioning nation-states that are resilient and accountable, economies that leave no one behind and benefit all, supported by fit-for-purpose international organizations, all focusing on the well-being of the people irrespective of their nationality, faith or race can be within reach."

After first appearing in the Chinese city of Wuhan in December, the new coronavirus has spread to at least 180 countries and regions. Confirmed coronavirus cases passed one million around the world on Thursday.

The virus claimed thousands of more lives in its relentless march across the globe, with Spain and Britain seeing the highest number of daily deaths yet, despite measures putting more than half of the planet on some form of lockdown.

In recent weeks, Turkey has closed most public spaces, schools and universities, and restricted public transport. It also imposed a 24-hour curfew for people aged 65 or over as well as for those with chronic illnesses. In Istanbul, people aged 65 or over with no financial means will receive food packages at their homes, Gov. Ali Yerlikaya said last week. The campaign covers nearly 50,000 people and will last for six weeks.