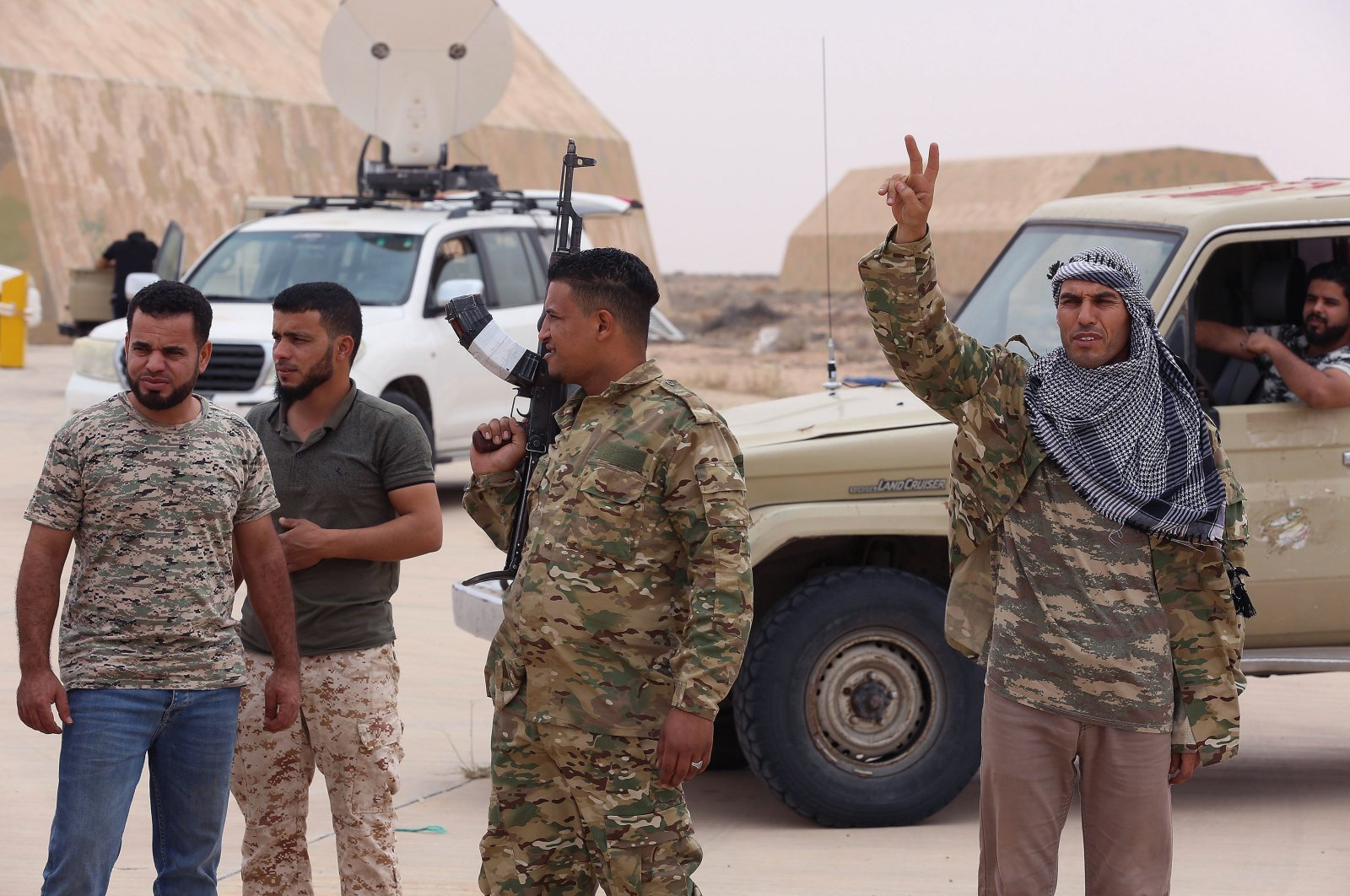 Fighters loyal to Libya's U.N.-recognized Government of National Accord (GNA) stand outside a hangar at al-Watiya airbase, May 18, 2020. (AFP Photo)
by DAILY SABAH WITH AGENCIES Jul 06, 2020 11:57 am
RECOMMENDED

Libya's U.N.-recognized government Sunday condemned overnight air raids against a recaptured strategic air base in the west of the country, alleging they were carried out by a "foreign air force."

Writing on social media, Salah Namroush said airstrikes by foreign fighter jets in support of "war criminal Khalifa Haftar" were a failed attempt to distract from recent victories by the Libyan Army.

He said a response to the attacks would be given at the "right time and the right place."

A military source, speaking on condition of anonymity due to restrictions on talking to the media, told Anadolu Agency on Sunday that the air base was struck by unidentified planes.

No casualties were reported following the incident, but some equipment recently brought to boost the air base's air-defense capabilities was damaged.

The overnight attacks were the first since May, when forces loyal to the Government of National Accord (GNA) regained control of the al-Watiya air base, 140 kilometers (90 miles) southwest of Tripoli, from troops aligned with eastern-based putschist Gen. Khalifa Haftar.

In a statement late Sunday, the council said the attack was an effort to achieve a hopeless empty victory against the successive victories of the heroic Libyan Army and its supporters.

The council also emphasized that the attack had been carried out by the war criminal Haftar and the forces behind him in an effort to prevent the creation of a national Libyan Army.

Plunged into chaos by the 2011 NATO-backed uprising that toppled and killed its longtime leader Moammar Gadhafi, oil-rich Libya has two rival administrations.

Haftar's forces are backed by Egypt, Russia and the United Arab Emirates.

His fighters withdrew from the southern outskirts of Tripoli and the entire west of the country in June after a string of battlefield defeats to the Turkish-backed GNA.

The country's new government was founded in 2015 under a U.N.-led agreement, but efforts for a long-term political settlement failed due to a military offensive by warlord Haftar's forces.

The U.N. recognizes the Libyan government headed by Fayez Sarraj as the country's legitimate authority, as Tripoli battles Haftar's militias.

The government launched Operation Peace Storm against Haftar in March to counter Haftar's attacks on the capital Tripoli, and recently liberated strategic locations, including al-Watiya air base and the city of Tarhuna, Haftar's final stronghold in western Libya.