Government of National Accord forces strike Haftar positions in Libya 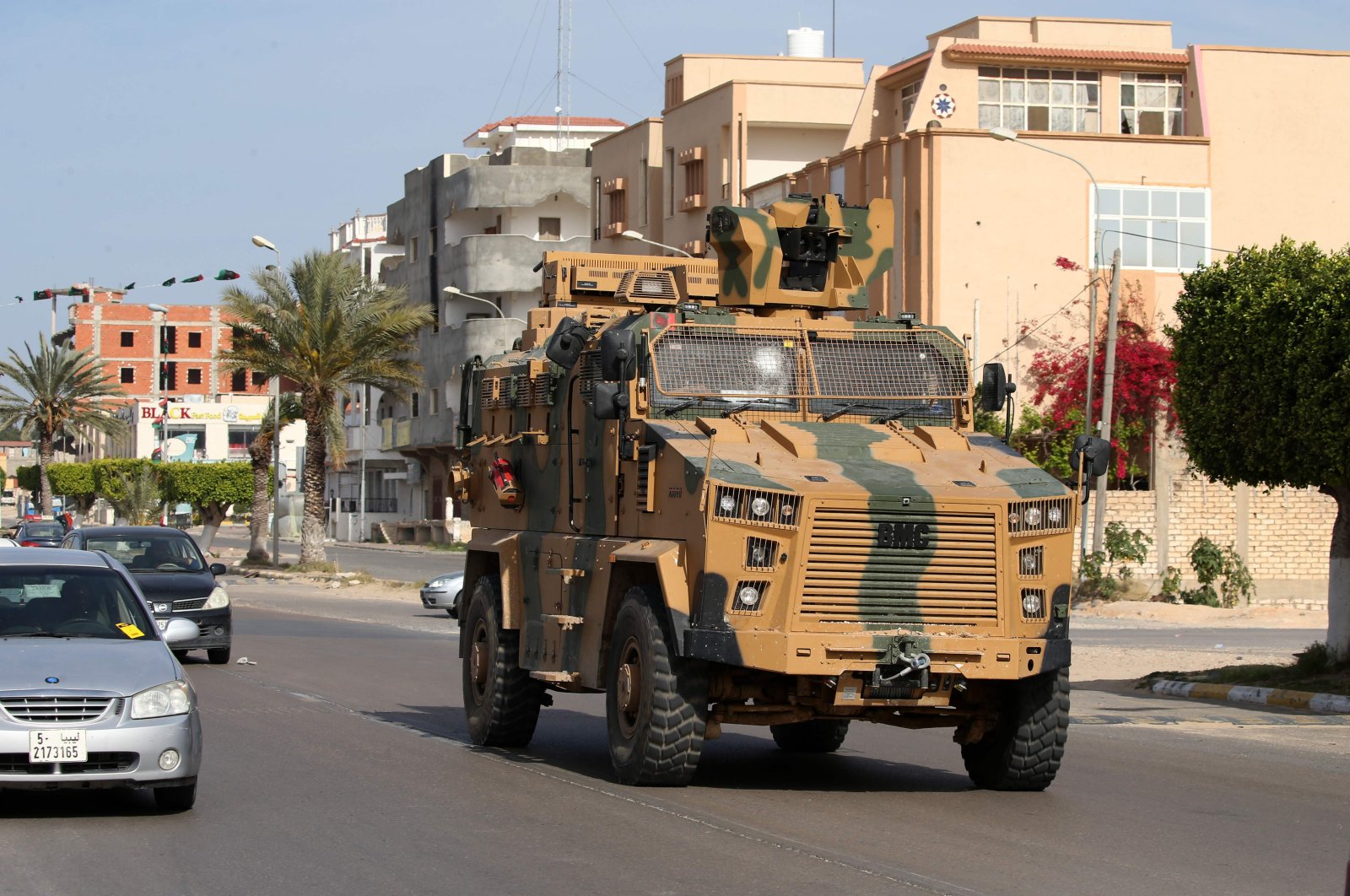 An armoured personnel vehicle drives down a street in the Libyan coastal city of Sorman on April 13, 2020, after Libya's unity government seized two coastal cities between Tripoli and the Tunisian border from troops backing putschist Gen. Khalifa Haftar. (AFP Photo)
by Daily Sabah with Agencies Apr 15, 2020 9:44 am
Edited By Eralp Yarar
RECOMMENDED

GNA military spokesman Mohammed Qanunu issued a brief statement on the developments at Al-Watiya air base in western Libya.

Al-Watiya is regarded as one of the most important air bases in the country and is second only to Mitiga International Airport near Tripoli. Haftar forces captured the air base in August 2014. He and his illegally armed forces in eastern Libya used it as his headquarters for western operations.

On April 3, airstrikes were carried out on Al-Watiya, which was mostly under the control of Haftar's militants. The operation destroyed three of Haftar's Su-22 fighter jets and many heavy weapons and facilities.

The damage caused by the operation played a key role in the GNA gaining air superiority in western regions of the country.

It was also reported that Haftar forces rained rockets on Tripoli on Tuesday after being ousted by unity government loyalists from a string of strategic towns west of the capital.

The capture Monday of the coastal towns of Sorman and Sabratha and smaller settlements further south was seen as a major blow to Haftar, who in April last year launched an offensive to seize Tripoli.

Sorman and Sabratha lie respectively 60 and 70 kilometers (40 and 45 miles) west of the Libyan capital, about halfway to the Tunisian border.

The oil-rich but poverty-stricken North African country has suffered almost a decade of conflict since longtime dictator Moammar Gadhafi was toppled and killed in a 2011 uprising backed by several Western powers.

"The criminal militia and mercenaries have taken out their anger on residential neighborhoods of Tripoli to avenge their defeat, firing dozens of rockets and missiles on the capital indiscriminately," spokesman Qanunu said.

The commander of the pro-GNA forces, Oussama al-Jwili, late Monday said the operation to capture Sabratha and Sorman was launched after he received information that Haftar fighters were moving west.

Haftar forces were planning to advance on the city of Zouara near the Tunisian frontier in an attempt to seize it and then advance on the Ras Jedir border post.

Fighting was also raging east of Tripoli, between the cities of Misrata and Gadhafi's hometown of Sirte, a strategic coastal location captured in early January by Haftar forces.

Misrata meanwhile is the hometown of many GNA loyalists.

Days of fighting also continued in the region of Abu Grein, southeast of Tripoli and halfway between Misrata and Sirte.

According to Harchaoui, the Turkish-backed GNA forces have in the recent weeks been more "aggressive ... on multiple fronts, often successfully."

"High-precision artillery on the ground, Turkish drones and better coordination" were proving a "formidable" combination against Haftar's forces, he said.

Turkey has sent armored drones and air defenses to prop up the embattled U.N.-backed Tripoli government. Russia, meanwhile, has deployed hundreds of mercenaries to boost Haftar’s assault. The United Arab Emirates and Egypt also back Haftar with fighter jets, drones and mine-resistant vehicles.

Meanwhile, losses from a protracted blockade of Libya's vital oil fields and ports have surpassed $4 billion, the country's national oil corporation said Tuesday, amid an escalation of fighting between rival forces for the capital Tripoli.

The National Oil Corporation, which dominates Libya’s critical oil industry, said Tuesday the losses from the oil blockade have exceeded $4 billion since Jan. 17.

“All areas of life, the national infrastructure and all Libyans, including men, women and children, are affected by this heavy loss. This will add to their suffering,” said Mustafa Sanalla, head of the NOC.

He called for lifting the closure, saying if the corporation resumes production, Libya “may be able to stop the collapse of its economy.”