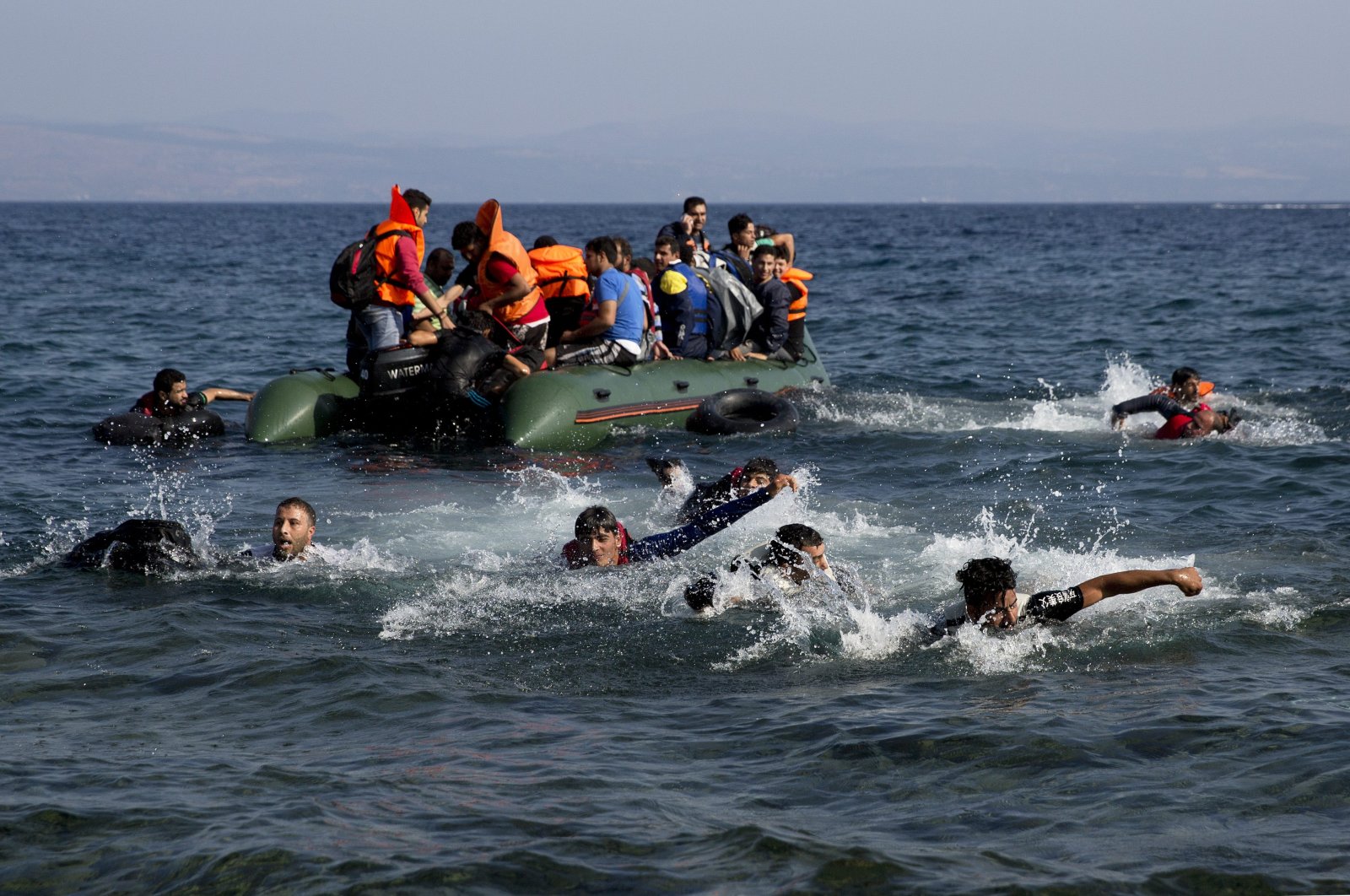 Migrants whose boat stalled at sea while crossing from Turkey to Greece swim toward the shore of the island of Lesbos, Greece, Sept. 20, 2015. (AP Photo)
by DAILY SABAH WITH AA Aug 22, 2020 2:55 pm
RECOMMENDED

The Greek government continues to deny that they have been pushing back thousands of migrants and asylum-seekers trying to reach the country's shores, despite evidence to the contrary, a global human rights watchdog said in a report on Saturday.

In a recent interview with CNN, Greek Prime Minister Kyriakos Mitsotakis denied the accusations, saying: "They are an insult to the Greek coast guard, who have saved tens of thousands of migrants and refugees."

However, evidence and reports describing the abuses are too widespread to be ignored, Eva Cosse, a researcher at Human Rights Watch (HRW), said in the report.

Cosse, after interviewing victims and witnesses, said that Greek authorities had been seen forcibly pushing back migrants and asylum-seekers in small inflatable boats from the islands of Rhodes, Samos and Symi.

One victim from Syria, using the pseudonym of Marwan, described how the Greek coast guard "carried out life-threatening maneuvers to force the small boat carrying passengers, including women and children, back to Turkey," Cosse added.

Similarly, such illegal and brutal actions have occurred at the Greek-Turkish land border, the watchdog said.

Cosse added that the European Commission, despite being aware of Greece's wrongdoing, has done nothing to stop the pushbacks or hold Greece to account.

The New York Times on Aug. 14 also reported Greece was "abandoning" migrants at sea for the Turkish coast guard to rescue. The newspaper said it had interviewed survivors from five such episodes and cited additional evidence from independent watchdogs, two academic researchers and the Turkish coast guard. Based on its research, the Times said more than 1,000 asylum-seekers had been "dropped at sea" since March.

Rights groups, including the U.N. refugee agency, have repeatedly called on Greece to investigate pushback claims.

"Such allegations have increased since March, and reports indicate that several groups of people may have been summarily returned after reaching Greek territory," the U.N. High Commissioner for Refugees (UNHCR) said in June.

On July 16, HRW said in a statement that Greek law enforcement officers had returned asylum-seekers and migrants at the land and sea borders with Turkey during the COVID-19 lockdown.

"The officers in some cases used violence against asylum-seekers, including some who were deep inside Greek territory, and often confiscated and destroyed the migrants' belongings," it added.

In a separate statement, the rights group said: "Greek security forces and unidentified armed men at the Greece-Turkey land border have detained, assaulted, sexually assaulted, robbed and stripped asylum-seekers and migrants, forcing them back to Turkey," while it also accused the European Union of "praising Greece’s border control measures and provided support through the European Border and Coast Guard Agency (FRONTEX)."

Ankara earlier this year opened its gates to migrants and refugees seeking to cross into Europe, accusing the EU of failing to keep its promises under a 2016 migrant deal.