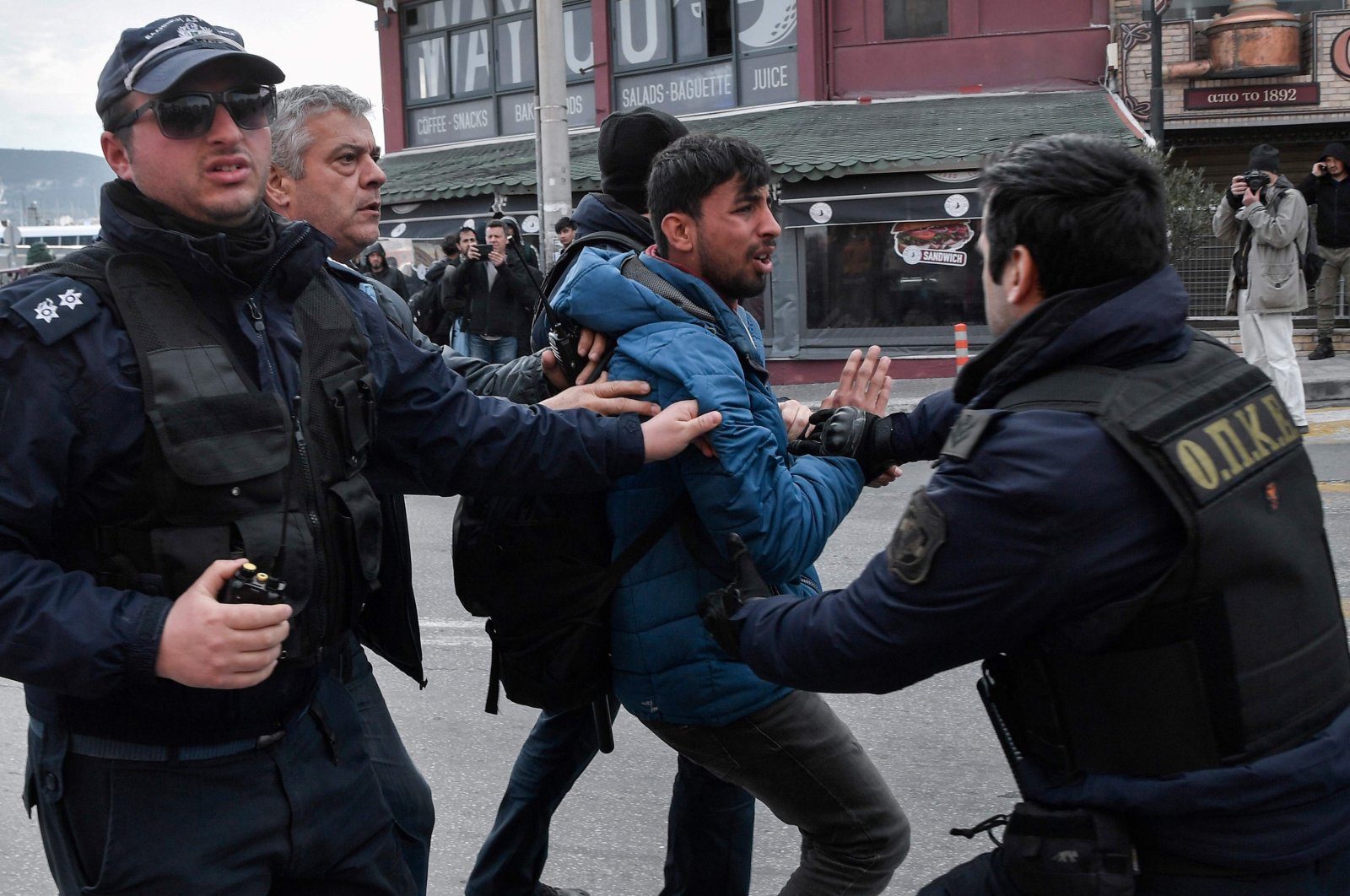 Greek police detain a migrant man while they try to push back migrants and refugees from the Moria camp who gathered outside the port of Mytilene on the island of Lesbos, hoping to get a ferry to Athens, March 4, 2020. (AFP Photo)
by Daily Sabah with AFP Jul 05, 2020 11:42 am
RECOMMENDED

Greece Saturday announced another extension of a coronavirus lockdown in its teeming migrant camps, despite allegations that it has used the pandemic to limit the movement of migrants.

The camp lockdown began on March 21 and has now been extended until July 19, the country's migration ministry said.

Migrants are only allowed to leave the camps between 7-9 p.m. in groups of less than 10, while no more than 150 people are allowed to exit per hour, it said.

Migrants are frustrated with the fifth extension of the lockdown in camps, saying it makes their lives even more difficult.

"I really don't have an idea why they are doing this. I feel so bad, so down because of it," Hamoudi, a migrant from Somalia and resident of the Vial camp on the island of Chios, told AFP.

The 24-year-old said he saw no social distancing in the camp and could not think of any health benefits of the lockdown for migrants.

"Maybe they just want to make it a closed camp," he said. "But closed for what?"

The camp lockdown has stopped most nongovernmental organizations (NGOs) from carrying out normal deliveries of clothing, diapers and other necessities.

"We can't get adequate aid to people. They are messaging us from inside the camp," said Ruhi Akhtar, a volunteer on Chios who regularly gave out clothes and other provisions to the refugees before the lockdown.

Parwana Ansari, a 16-year-old from Afghanistan who lives in the Vial refugee camp, said people needed to leave the camp simply to get basic necessities.

"We need to go to town to go shopping," she said. "The food in Vial is no good."

Marco Sandrone, coordinator of the medical charity Doctors Without Borders (MSF) at the Moria refugee camp on Lesbos, said before the announcement that the lockdowns had nothing to do with public health as there had been no cases in the camps.

Greece, with 192 coronavirus deaths, has so far not been as badly hit as many other European countries – and there have been no deaths in the migrant camps.

But the presence of more than 32,000 migrants on the five Aegean islands – in camps with a total capacity of 5,400 – has caused major friction with local communities.

The government is transferring thousands of migrants to the mainland, as the country has started letting in foreign visitors for the tourist season.

Certain NGOs and volunteers have argued that the lockdown extension is linked to Greece's tourist season.

"They try to make the refugees as invisible as possible and think that then the tourists would love to come," said Jenny Kalipozi, a Chios island local and volunteer who often brought aid to the Vial refugee camp.

Greece has been frequently criticized for its questionable practices and policies toward migrants and for the inhumane conditions of its overcrowded camps. Athens has lately decided to deploy a floating barrier to stop migrants arriving from the Turkish coast off the island of Lesbos in the coming weeks.

The area northeast of Lesbos has been chosen for the project, along a waterway used by hundreds of thousands of migrants attempting to enter the country from neighboring Turkey in recent years. Rights groups have criticized the plan as potentially life-threatening to migrants in overflowing dinghies who often require rapid rescue.

The Greek government has struggled to manage the influx, keeping many in overcrowded camps on the Aegean Greek islands near the Turkish coast. A wire fence on Greece's land border with Turkey is also currently being expanded.