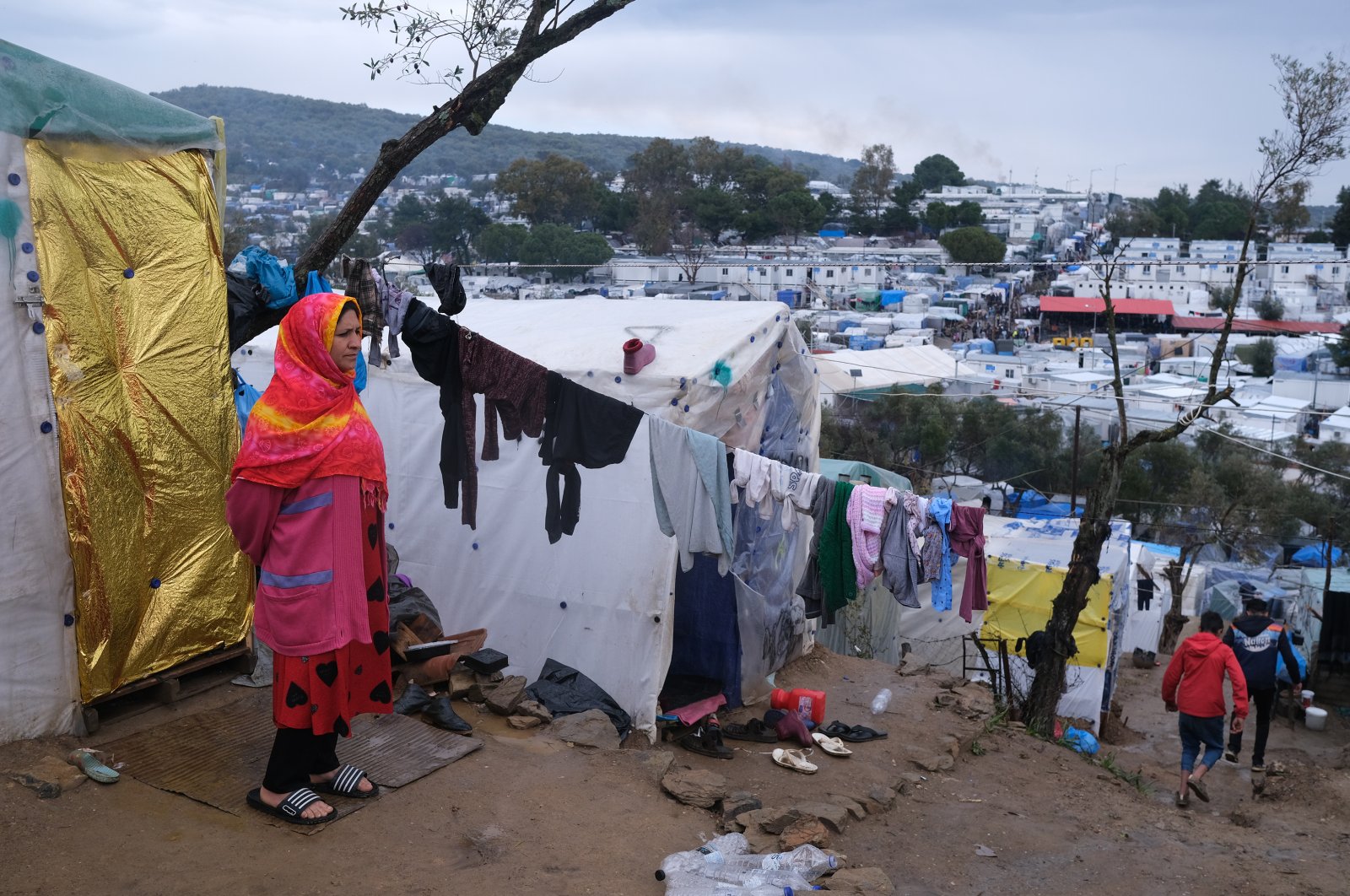 A migrant stands next to her makeshift tent outside the perimeter of the overcrowded Moria refugee camp on the northeastern Aegean island of Lesbos, Greece, March 11, 2020. (AP Photo)
by French Press Agency - AFP Mar 18, 2020 10:21 am
Edited By Nurbanu Tanrıkulu Kızıl
RECOMMENDED

Greece has said it is placing migrant camps across the country on a two-week shutdown to visitors to ward off the new coronavirus.

"Visits (to camps) by individuals and organizations are suspended for at least 14 days," the migration ministry said in a statement Tuesday.

"Entry will be allowed only to staff and there will be a compulsory temperature check for new arrivals," it said, adding that residents would be encouraged to limit their movements in and out of the camps.

Greece has progressively tightened restrictions on trade and public gatherings, and the national death toll from the virus now stands at five with 387 cases.

There are tens of thousands of asylum seekers in camps on the Greek mainland and islands near Turkey, and most of them are badly overcrowded.

Hundreds more arrived this month after Turkey announced it would no longer stop people from attempting to reach the EU, leading to days of chaos at the Greek border.

In a statement to mark four years since the deal, the Greek Council for Refugees and Oxfam said that "suffering has reached unimaginable levels."

"Nothing can justify the indiscriminate detention of people seeking asylum, and Greece should not deny them a safe place during the current health crisis, nor send them back to situations where their lives and freedom are at risk," they said in a joint statement.

Oxfam migration expert Raphael Shilhav said, "While the coronavirus COVID-19 crisis is creating many uncertainties about the future, it is crucial that governments continue to protect the most vulnerable and keep to their promise to offer children safe conditions at this time."

A number of migrants have told Turkish authorities and rights groups that they were stripped and beaten by armed men on the Greek side of the border.

Human Rights Watch said it had spoken to 21 asylum-seekers who told the group, "Greek security forces and unidentified armed men (had) detained, assaulted, sexually assaulted, robbed, and stripped asylum-seekers and migrants, then forced them back to Turkey."

The group also criticized a decision by Athens to suspend new asylum applications until April and summarily deport those arriving in this month's surge.

On Monday, a 6-year-old child died in a fire that broke out in a container housing asylum-seekers at the migrant camp of Moria on the island of Lesbos.

Council of Europe Commissioner for Human Rights Dunja Mijatovic on Tuesday said the death was "another tragic illustration of the urgent need to improve safety and sanitary conditions on Aegean islands."

"Greek authorities must act now to prevent other tragedies and plan swift decongestion of the islands," she said.

The Greek migration ministry hastily opened two camps on the mainland for hundreds of new arrivals on the islands.

On Tuesday, the ministry said all schooling and other indoor activities at the camps would be interrupted for the duration of the virus measures.