Greece resorts to violence, seeks Western support as thousands turn up at border 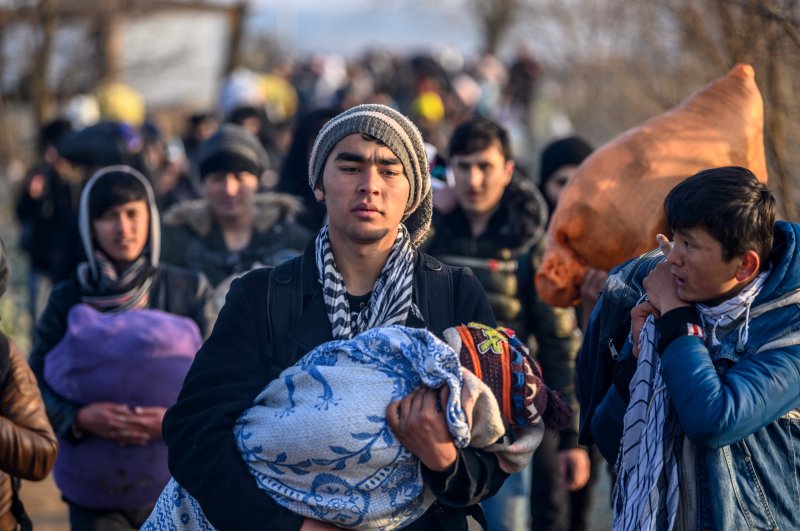 World fails Syrian refugees again as thousands face violence from Greece, which insists on preventing border crossings for a new life in Europe

As thousands of refugees reach the border gates of Greece to cross over to Europe with the hope of starting a new life, the Greek border police resorted to violence against the migrants while, at the same time, Greek authorities sought support from their Western allies.

After Turkey’s announcement on Thursday to open the borders for the refugees who want to move to Europe, a massive refugee flow emerged from the country to the Pazarkule/Kastanies border gates, only to face the brutalities of the Greece border police, who used tear gas and stun grenades.

Apart from the tear gas and grenades, the police also arrested dozens of refugees for attempting to enter the country. According to Greek officials, they arrested 66 migrants Friday, 17 of whom were sentenced to 3.5 years in jail for entering the country illegally. Those sentenced were all Afghans and were the first migrants sentenced for illegal entry since 2014. On Saturday, Greece arrested another 70 people who tried to cross the land border illegally.

The violence against refugees has started to come to light as individual cases began to be reported. Over the weekend, two Afghan refugees, who were attempting to cross to Greece through a dinghy, were captured by Greek soldiers on the other side of the Maritza. Reporting that they were beaten by the soldiers, the refugees stated that their money and clothes were also taken away from them. According to the reports, one of the refugees had marks from the assault while the other one was missing his pants. After being mistreated by the Greek soldiers, the two refugees were forced to return to Turkey by the same dinghy they used to cross Maritza. Upon their return, the refugees said they couldn't eat anything for two days.

Still, despite the assaults, the attempts by refugees to cross the border continue as many are making the short but often perilous sea crossing from the Turkish coast to the Greek islands. At least three dinghies carrying migrants arrived on the Greek island of Lesbos Sunday morning.

Greek Deputy Defense Minister Alkiviadis Stefanis told the local broadcaster Skai that there were around 9,600 attempts to illegally cross Greece’s border during the night from Saturday to Sunday. Stefanis said all were successfully thwarted. Previously, several dozen migrants had managed to make it through.

On Saturday, President Recep Tayyip Erdoğan said Turkey would not stand in the way of refugees and migrants already in the country who hope to head to Europe.

“We will not close the gates to refugees,” he said. “The European Union has to keep its promises. We are not obliged to look after and feed so many refugees," he added.

As a response to Turkey’s move, the Greek government said: “Greece has warded off an organized, massive and illegal border violation by thousands of migrants from Turkey in the past few hours after Ankara eased controls for people trying to reach Europe.”

Greece is also strengthening its controls of the east Aegean islands with more than 50 coastguard and navy ships, the government spokesman said.

"We stopped and protected our borders, which are also the EU's borders," he said.

Greece has further said it is determined to stay vigilant at its border with Turkey after Ankara allowed large numbers of migrants into the border area.

Yet, the escalating humanitarian crisis in the region caused many nongovernmental organizations to react, expressing concern over the well-being of refugees.

The U.N. migration organization said Sunday that at least 13,000 people were amassed on Turkey’s land border with Greece.

The U.N.’s International Organization for Migration said Sunday that by the previous evening, its staff working along the land border “had observed at least 13,000 people gathered at the formal border crossing points at Pazarkule and Ipsala and multiple informal border crossings, in groups of between several dozen and more than 3,000.”

"Most of those on the move are men, but we are also seeing many family groups traveling with young children," IOM Turkey Chief of Mission Lado Gvilava said in a statement.

"The temperatures are dropping to nearly zero and the wind is quite bad so we're concerned about these vulnerable people who are exposed to the elements," he added.

Overlooking the humanitarian concerns and insisting on its violent “measures,” Greece also rolled up its sleeves to seek support from its Western allies, calling on EU’s Foreign Affairs Council to have an emergency meeting to stop the refugee flow.

According to Greek media reports, Nikos Dendias, the foreign minister of Greece, had a phone call with EU Minister for Foreign Affairs Josep Borrel and demanded an emergency meeting. It is also reported that Dendias also had talks with the U.S.’ Greek envoy, as well as with his Austrian, Bulgarian and North Macedonian counterparts. Dendias also had a phone call with Turkish Foreign Minister Mevlüt Çavuşoğlu on Friday.

However, while Greece is under a quandary on how to handle the refugee flow, other border countries, and most of the European countries, seem to have a more balanced, calm attitude toward the developments.

Bulgaria, another EU member that shares a border with Turkey, said it was not experiencing any problems there.

"There is zero migration at our border," Prime Minister Boyko Borisov said on Saturday according to a report by the state broadcaster. Borisov said earlier he had spoken to Erdoğan on Friday and they had agreed to meet next week.

The situation now is no different from the situation of the past few days, border police chief Svetlan Kichikov confirmed at the largest Bulgarian-Turkish border crossing, Kapitan Andreevo in Bulgaria.

Migrants were moving west from Istanbul, but not toward the Bulgarian border, he said.

Still, Bulgarian Defense Minister Krasimir Karakachanov ordered the readiness of 300 soldiers and 50 special forces on Saturday to be deployed to the Turkish border if necessary. A total of 1,000 soldiers could be sent, he said.

Austria, on the other hand, said on Saturday it would strengthen border protection if necessary.

"If the protection of the EU's external border is unsuccessful, then Austria will protect its borders. A situation like 2015 must not be repeated," Chancellor Sebastian Kurz said.

The European Union is "actively engaged" in efforts to uphold its 2016 migration deal with Turkey, European Council President Charles Michel said on Saturday, following a telephone conversation with Erdoğan.

He has also been in close contact with the Greek and Bulgarian prime ministers and highlighted the bloc's efforts to help both countries "protect the EU's external borders," he said in a statement.

Schinas has reached out to Croatia, which holds the rotating EU presidency, "to request that EU Home Affairs Ministers meet urgently," he wrote on Twitter.

Previously, Mitsotakis had informed German Chancellor Angela Merkel by telephone about the procedure on the border with Turkey on Friday and said that Greece would not tolerate any illegal border crossing.