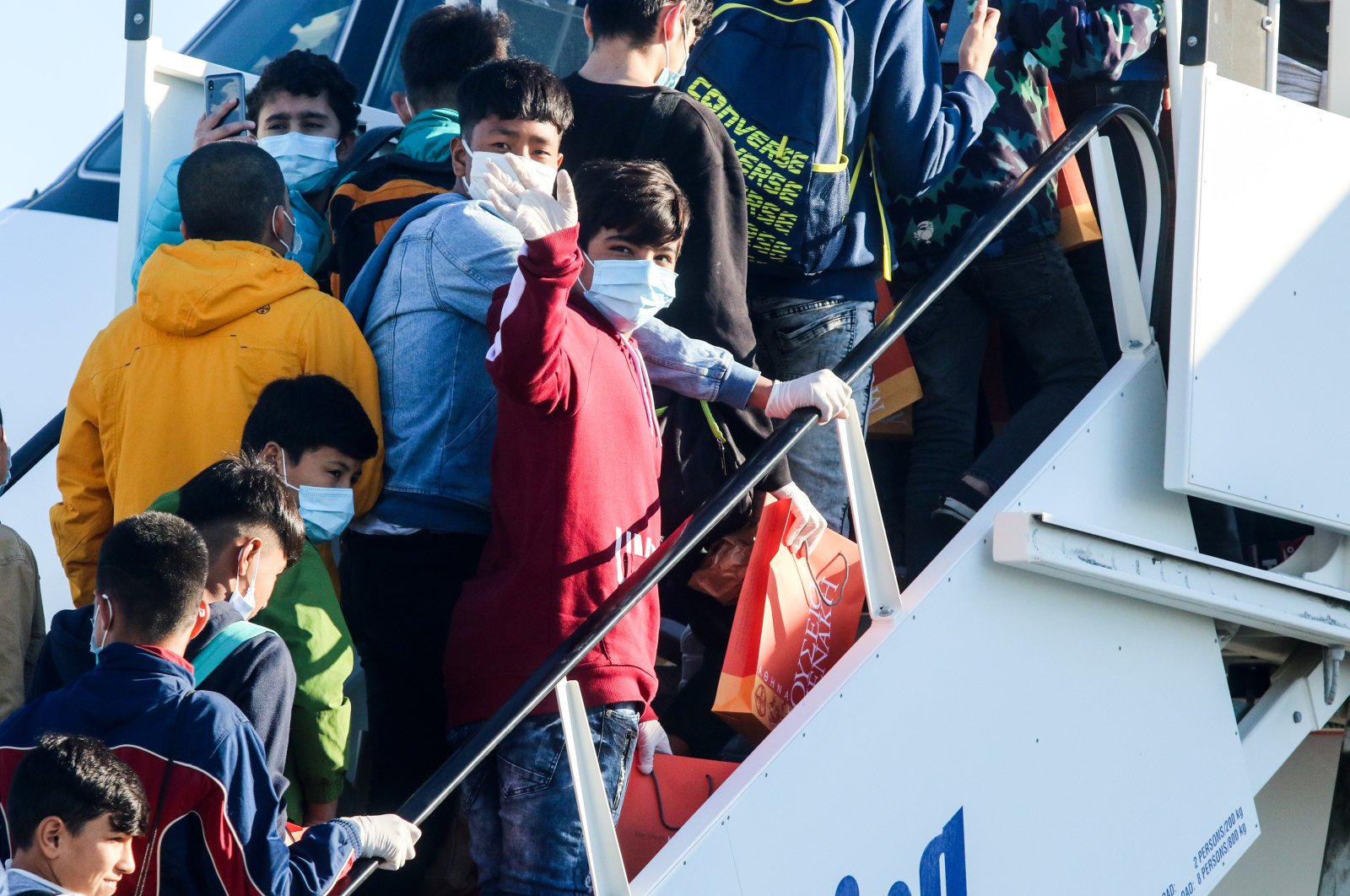 Dozens of refugee children from overcrowded camps on the Greek islands flew from Athens to the northern German city of Hanover Saturday, the second group of unaccompanied minors to make such a journey out of Greece this week.

The 47 minors then boarded two buses to travel from Hanover to the Osnabrueck area for a 14-day coronavirus quarantine.

Despite the protective masks they were wearing, they were evidently smiling and many gave a thumbs up to photographers waiting nearby.

The group is made up of 42 children and five young people, four of whom are accompanying younger siblings, according to federal and state interior ministries.

The majority of the unaccompanied minors, with an average age of 13, come from Afghanistan, Syria and Eritrea, according to sources in the Ministry of Migration in Athens.

His words were echoed by the federal and state interior ministers in Germany.

"I am pleased that we are able to receive the first unaccompanied children today, despite the seriousness of the coronavirus crisis," said German Interior Minister Horst Seehofer.

After their coronavirus quarantine, some of the children will stay in Lower Saxony, about 20 have relatives they will go to and the others are to be distributed across Germany's federal states.

The process of bringing the children to Germany took longer than hoped, according to the Greek deputy migration minister, as numerous authorities and organizations are involved in assessing the children and allocating them to places considered suitable.

The children are also assessed in terms of their physical and psychological health, which also takes time.

They are the second group of minors to be taken from the notorious camps on the Greek islands of Lesbos, Chios and Samos.

Already on Wednesday, 12 young people were taken in by Luxembourg.

The plan provides for around 1,600 young people to be brought to other EU countries. A good 90% of the minors are boys.

Some 39,000 people are currently staying in camps on the islands in the east of the Aegean. According to the U.N. Refugee Agency (UNHCR), around 36% are minors.

"It's a small number and can really be only a beginning when it comes to easing the overcrowding of the camps on the Greek islands," Frank Remus, the German UNHCR representative, told dpa.

He said people should bear in mind that the youngsters had come to a world that was foreign to them, far from their familiar environment and without the people they were close to. "How they settle in Germany depends on helpful hands and open hearts," he added.

Germany plans to take in 350 to 500 unaccompanied minors from the islands, preferably children under the age of 14, those who are ill and girls.

The German government expects that other EU countries willing to take in young people, but delayed by the coronavirus, will nonetheless fulfill their commitments.

Alongside Germany, countries including Luxembourg, Belgium, Bulgaria, France, Croatia, Finland, Ireland, Portugal, Lithuania and Switzerland have all made similar promises.

Tens of thousands of asylum-seekers live in dire conditions in Greek camps. The conditions have worsened recently due to outbreaks of coronavirus.

The worst congestion occurs in camps on five Aegean islands near Turkey where more than 36,000 people are staying in space for fewer than 6,100.

The European Union said on March 13 that a group of member countries had agreed to take at least 1,600 children who reached Greece were traveling without their parents. Restrictions that EU member nations adopted to slow the spread of the coronavirus, however, complicated efforts to start putting the deal into effect.

The European initiative was launched last month by the EU Commission to ease the pressure on Greece.

The children concerned in the program either have medical needs or are unaccompanied and under 14 years of age.

Tens of thousands of migrants tried to get into EU member Greece after Turkey said in February it would no longer prevent them from doing so, as agreed upon in a 2016 deal with the EU in return for aid for Syrian refugees.

Greece has described conditions in the camps on some of its islands, where more than 40,000 asylum-seekers are now stuck during the coronavirus crisis, as a "ticking health bomb."

While the rush to the border in March met a strong response from Greek security forces, tensions have largely settled since the outbreak of the new coronavirus prompted Turkey to close its borders with Greece and Bulgaria.

Greece is urging the EU to help during the coronavirus crisis and has said it is ready to protect its islands, where no cases have so far been recorded.

Still, Athens had to quarantine a migrant camp on the mainland after 23 asylum-seekers tested positive for the coronavirus.