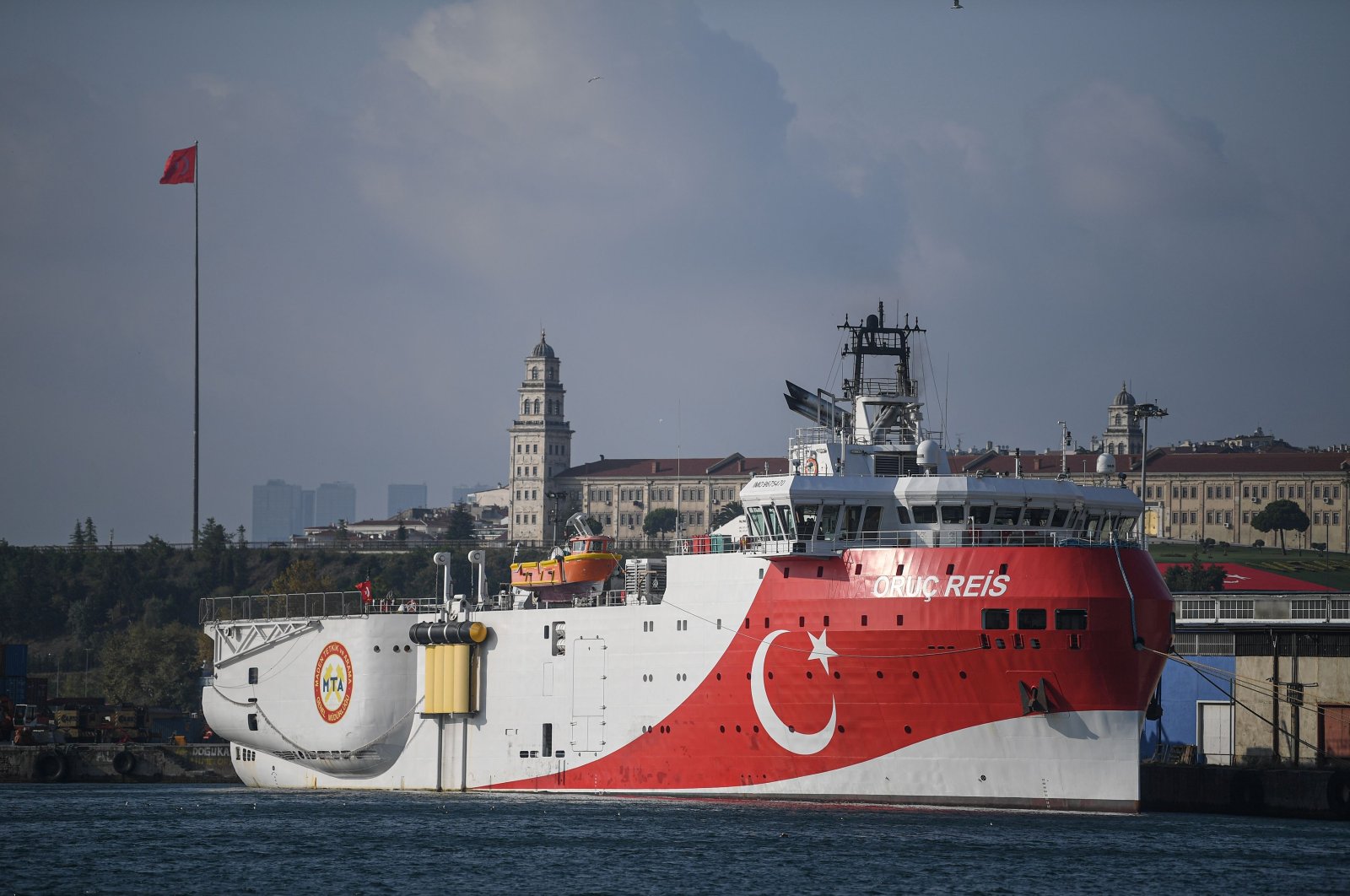 Despite Ankara's recent calls for dialogue to resolve conflicts in the region, Athens once again used provocative language that ignores Turkey's legal rights and legitimate interests

Greece continues to turn a deaf ear to Turkey’s calls for constructive dialogue to reach a peaceful solution in the Eastern Mediterranean, as the Greek foreign minister on Tuesday asserted that Turkey's legal activities carried out by the MTA Oruç Reis seismic research vessel in the region "violate the Greek continental shelf."

Speaking to reporters after a meeting with Prime Minister Kyriakos Mitsotakis, Nikos Dendias threatened Turkey, saying that Greece "will not accept a fait accompli; there will be no tolerance."

He said Athens had requested an emergency meeting of the European Union Foreign Affairs Council to discuss the issue.

On Monday, President Recep Tayyip Erdoğan said in a statement that Ankara was always ready to resolve conflicts fairly through dialogue.

Erdoğan called on Mediterranean countries to cooperate in finding "an acceptable formula that protects the rights of all."

Last month, after Athens objected to Turkey's seismic survey in an area south of the Greek island of Kastellorizo (Megisti-Meis), German diplomatic efforts helped defuse tensions between Turkey and Greece.

In the face of recent efforts by Greece, the Greek Cypriot administration and Egypt to limit Turkey to its mainland, Turkey announced Monday that it would respond by continuing exploration activities in the Eastern Mediterranean with its seismic research vessel, the Oruç Reis.

Reaffirming that it would continue protecting its legitimate interests via diplomatic and military means, Ankara has said the Oruç Reis would conduct research in the region until Aug. 23.

Turkey to protect its rights

Defense Minister Hulusi Akar said Tuesday that Turkey has taken all measures to protect its rights and interests in the Eastern Mediterranean arising from international law in its maritime jurisdiction areas.

Addressing top Turkish commanders in a videoconference, Akar said no dealings that excluded Turkey and the Turkish Republic of Northern Cyprus (TRNC) could be implemented in the region and that Ankara would not allow any fait accompli in the Eastern Mediterranean.

Gülnur Aybet, a senior adviser to Erdoğan, also shared a tweet on Wednesday calling on the EU and its members to share resources and burdens equally in the Mediterranean.

"A one-sided approach leaving Turkey to shoulder all the burdens of the region while trying to imprison Turkey on its shores, denying its rights in the Mediterranean: not acceptable," she wrote.

Turkey has long contested the Greek Cypriot administration's unilateral drilling in the Eastern Mediterranean, asserting that the TRNC also has rights to the resources in the area.

Turkey's Foreign Ministry shared a map Monday showing the areas in its continental shelf and EEZ where the Oruç Reis would be active.

Turkey thereby showed in the field that the Greek-Greek Cypriot plan was void and that the so-called contiguous maritime jurisdiction areas, which aim to surround the Anatolian peninsula, were invalid.

Ankara, therefore, gave the message that it would protect the contact between Turkey's and Libya's continental shelves, which Greece and Egypt sought to cut off with their agreement.

Athens' disputes with Turkey have continued for many years in the Aegean Sea and Eastern Mediterranean.

Greece claims that even its smaller islands that span the Aegean and Eastern Mediterranean – many of which are only a few kilometers (miles) from Turkey's mainland – project maritime rights and have a continental shelf.

Athens claims 40,000 square kilometers (11,660 square nautical miles) of maritime jurisdiction with the zone that it attributes to the 10-square-kilometer (2,470-acre) island of Kastellorizo, which is 580 kilometers (313 nautical miles) from its mainland.

However, it compromised its claims in its agreement with Egypt, restricting the continental shelf of the islands that it traditionally defended.

It thus refuted its own claims that the continental shelves of the islands could not be restricted.

The dispute between the two neighboring countries over the rights in the Eastern Mediterranean has drawn the attention of other countries in the region.

Most recently, Israel, another regional actor at odds with Turkey, has declared its support for Greece in the dispute.

Sharing a statement Tuesday, Israel’s embassy in Athens said they have been closely following the increasing tensions in the Eastern Mediterranean.

It added that they support and cooperate with Greece in its arguments about the delimitation of maritime borders and EEZs.

Greece, the Greek Cypriot administration and Israel in January signed an agreement for a huge pipeline project to transport gas from the Eastern Mediterranean to Europe despite Turkey's opposition to the deal and concerns about the feasibility of the project.

On the other hand, thousands of Pakistani people shared messages of support for Turkey on social media with the hashtag "TurkeyIsNotAlone."

A spokesman for EU foreign policy chief Josep Borrell also said the situation was deeply concerning and needed to be solved through dialogue.

"Apparently the developments on the ground, unfortunately, show that ... more needs to be done in order to defuse the tensions and reverse the very negative and unfortunate trend of escalation," spokesperson Peter Stano told reporters Tuesday.

"That's why (Borrell) stated that he is deploying all efforts necessary to reestablish the dialogue, positive constructive dialogue, and to facilitate the reengagement, and these efforts are ongoing," Stano said.

On Wednesday, Borrell tweeted that he was calling an extraordinary Foreign Affairs Council meeting for Friday, to discuss the situation in the Eastern Mediterranean, as well as the presidential elections in Belarus and developments in Lebanon after a massive deadly explosion there.

Meanwhile, the Greek foreign ministry announced Wednesday that the foreign ministers of Greece and the United States will meet in Vienna on Friday to discuss tensions in the Eastern Mediterranean, amid the dispute between Athens and Ankara over hydrocarbon resources.