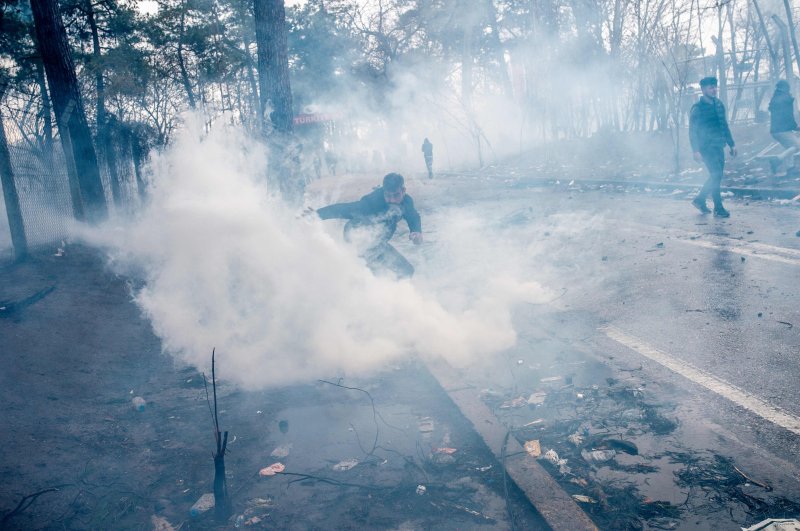 Greek police could be employing similar types of tear gas canisters to those that have killed and seriously injured dozens of protesters in Iraq, according to investigative website Bellingcat.

Zooming in on photos shared online, Bellingcat said Greek police appeared to be using long-range tear gas canisters that are designed to be fired from far greater distances and could constitute lethal force if fired from the range that has stood between migrants and Greek police over the past few days.

The report said the markings on the canisters indicated they were “CS 560 Long Range” canisters designed by U.S.-based Defense Technology firm.

“A police fact-sheet from 1969 describes this munition as weighing 284 grams, with a muzzle velocity of 225 feet per second and a range of 150 yards. It is not yet known if more modern versions of this munition have different characteristics,” the report said.

“The use of this kind of munition may be the reason for multiple claims, images and videos, of seriously wounded or dead protesters at the Greek-Turkish border. This included an incident on March 2nd which was reported to have resulted in the death of a Syrian man after he was shot in the throat,” it added.

The munitions that @Omega_RF and @bellingcat identified are extended range tear gas grenades manufactured by Defense Technology - Federal Laboratories
These are designed to have a range of 150 meters or so and weigh approximately 280 grams. pic.twitter.com/g6bCKES01K

According to Turkish officials, Greek forces killed a migrant and wounded five others Wednesday as the migrants tried to cross the border between the two countries.

Two Turkish security officials and the local governor's office in the border province of Edirne said the migrant had died in a hospital from a chest wound after Greek police and border guards fired live ammunition near the crossing at Pazarkule. They said five others had suffered head and leg wounds.

Thousands of migrants have been forced to sleep in the open, some since last week, exposed to the elements and in temperatures close to freezing in Edirne in northwestern Turkey.