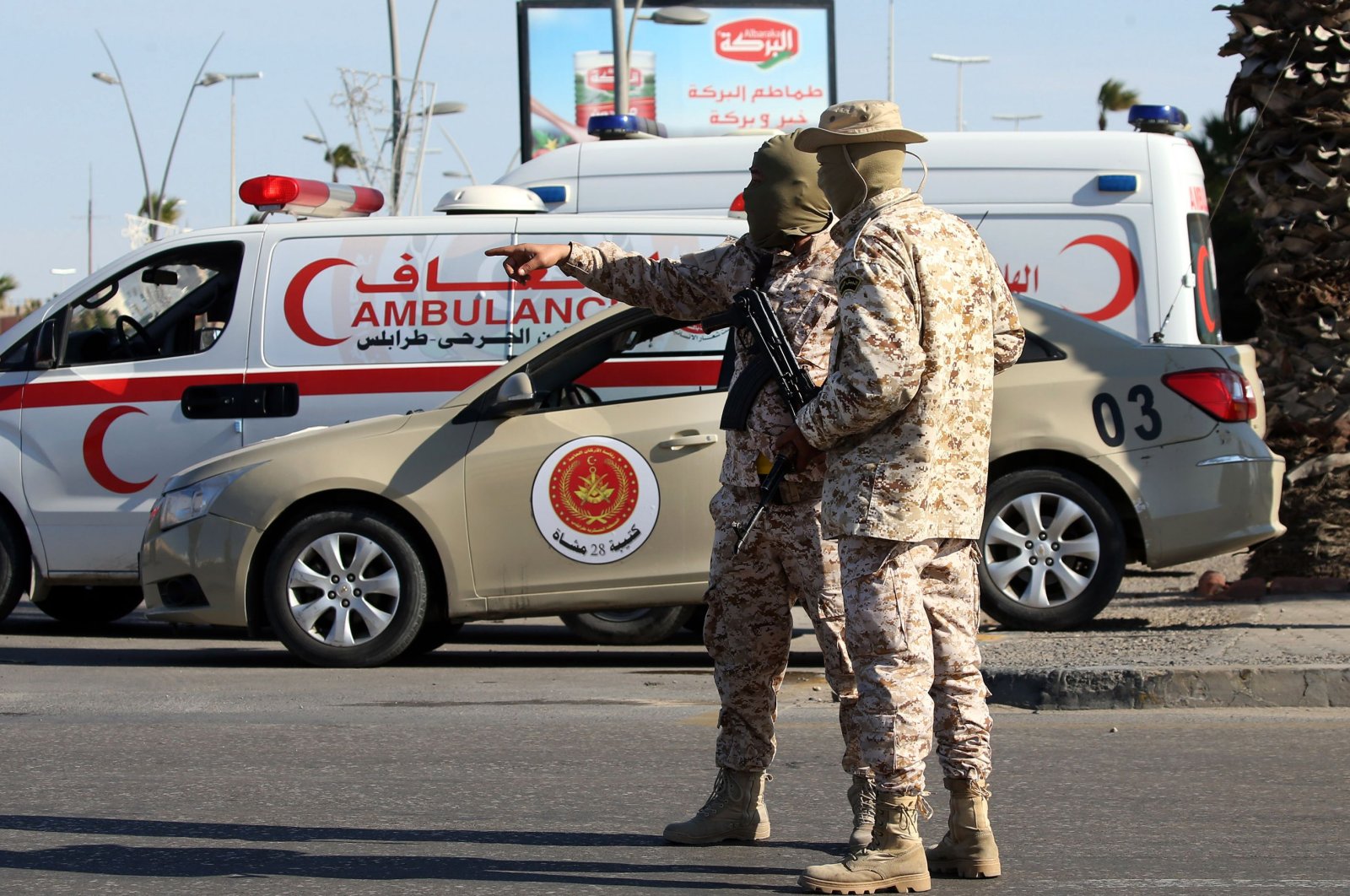 Members of the Libyan security forces man a checkpoint in the capital Tripoli, to insure that the strict measures taken by the authorities to stem the spread of the coronavirus are respected, Friday, April 10, 2020. (AFP)
by DAILY SABAH WITH AA Apr 12, 2020 12:24 pm
RECOMMENDED

On Sunday, medicine depots in southern Tripoli, Libya, were struck by Grad missiles fired frıom forces loyal to putchist Gen. Khalifa Haftar.
According to a statement released from the headquarters of the U.N.-recognized Government of National Accord (GNA)'s Operation Burkan Al-Ghadab (Volcano of Rage), the latest attack took place following a hit on drug warehouses belonging to Al-Khadra Hospital, one of few medical centers dedicated to dealing with the coronavirus threat.
Haftar's militias attacked Al-Khadra Hospital’s medicine depots using BM-21 "Grad" missiles for the third time within the past week. The U.N. has condemned the shelling on the hospital as a "clear violation of international law."

Attacks from forces loyal to Haftar on vital medical facilities needed to fight the coronavirus pandemic have continued for days. On Monday and Tuesday, a barrage of rockets was fired at Tripoli’s Al-Khadra Hospital, where over 300 patients were being treated, including two for COVID-19, as well as many for shrapnel wounds and burns from bombs. A medical worker was wounded and many patients were evacuated due to the incident. Three civilians were also wounded as shells crashed into cars and houses in the surrounding neighborhood of Abu Salim during the first day of attacks on the hospital.

In recent weeks, forces under the command of Haftar have escalated their yearlong siege on the capital, despite appeals for a cease-fire on the basis of allowing authorities to focus their resources on the growing pandemic.

According to the U.N., as of March 2020, a total of 27 health facilities have been damaged to varying degrees due to their proximity to clashes, including 14 health facilities that have been closed and another 23 which are at risk of closure due to shifting lines of conflict.
Many experts state that Haftar's forces are deliberately targeting infrastructure to increase pressure on the GNA, which has been advancing militarily toward Tripoli.