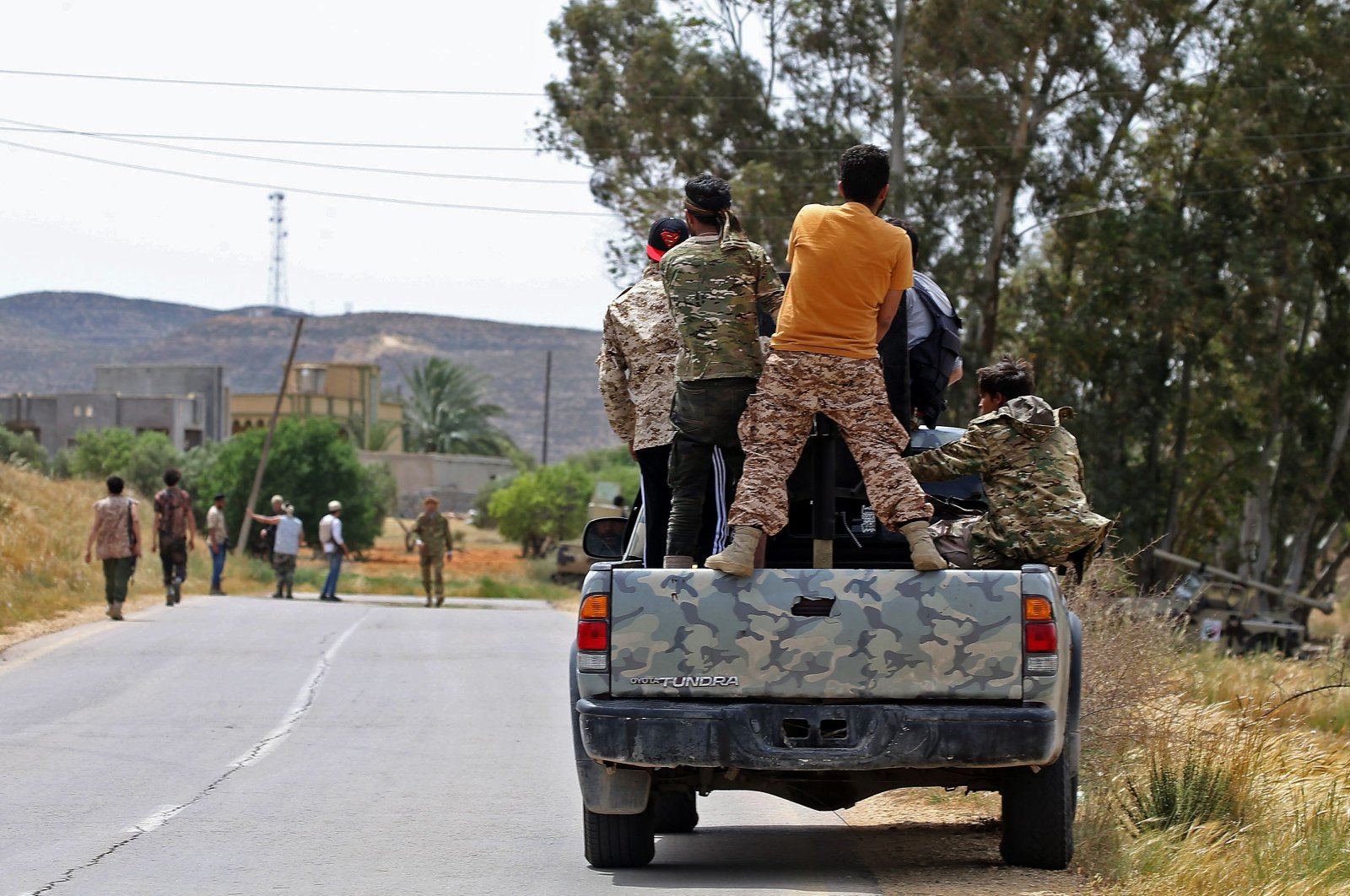 Libya's UN-recognized Government of National Accord (GNA) forces have made progress towards the town of Tarhuna near Southwest Tripoli within Volcano of Rage Operation in Libya, April 19, 2020. AFP Photo)
by DAILY SABAH WITH AGENCIES Apr 26, 2020 10:34 am

As putschist Haftar’s forces continued shelling civilian settlements in Tripoli during the first days of the Islamic holy month of Ramadan, European countries made a joint call for a humanitarian truce

Militias loyal to putschist Gen. Khalifa Haftar continue to attack residential areas in southern Tripoli, even during the first days of the Islamic holy month of Ramadan, the internationally recognized Government of National Accord (GNA) said Sunday.

Four Nigerian workers were injured in an attack against civilians in the capital, Tripoli, the GNA-led Burkan Al-Ghadab (Volcano of Rage) Operation said on social media.

In light of the pressing coronavirus crisis, a cease-fire took effect on March 21. However, Haftar's militias have continued their attacks on the capital.

Libya has reported two deaths from the virus, as well as 60 confirmed cases and 15 recoveries. The country recorded its first case on March 24.

The GNA has been under attack by Haftar's forces since last April, with more than 1,000 killed in the violence. The government launched Operation Peace Storm on March 26 to counter these strikes.

The GNA announced April 13 its forces had removed Haftar's militias from at least eight provinces, removing a 3,000-square-kilometer (1,158-square-mile) area from the warlord's grip.

The air force of Libya's U.N.-recognized GNA also launched an air attack on tankers transporting fuel to Haftar's militias. Three tankers transporting fuel to Haftar's militias were hit in the operation in Tarhuna city in the province of Bani Walid, a statement by GNA official Muhammad Kanunu said. The attack comes as last week, GNA forces launched a military operation to recapture Tarhuna, which holds strategic value for Haftar as his last major stronghold in the area surrounding Tripoli.

Meanwhile, this week, Haftar's militias attacked the capital Tripoli once again on the first day of the Islamic holy month of Ramadan, killing three civilians.

The U.N. on March 22 urged conflicting parties in Libya to the cease-fire. Both parties announced their acceptance of the proposal, with Haftar's militias attacked Tripoli.

It was the second of two truces and cease-fires which both parties, warlord Haftar and the GNA, agreed to sign up to. One was the Jan.12 truce in the German capital Berlin that was called upon as a result of the efforts of President Recep Tayyip Erdoğan and his Russian counterpart Vladimir Putin.

Since Jan.12, over 850 violations have been recorded by the U.N. with 70 breaches during the last week alone. The U.N. states that 49 civilian casualties were recorded between April 14 and April 20, including eight deaths.

Libya is suffering from divided institutions, corruption, a struggling economy and low oil revenues. According to the U.N., since the blockade was imposed around mid-January, the country has lost $4 billion in oil revenues while the country also faces the relatively new threat of COVID-19.

Meanwhile, the foreign ministers of Germany, France and Italy, as well as the European Union's top diplomat made a joint call on Saturday for a humanitarian truce in Libya, saying all sides must resume peace talks.

"We want to unite our voice with those of the U.N. Secretary-General (Antonio) Guterres and his Acting Special Representative for Libya, Stephanie Turco Williams, in their call for a humanitarian truce in Libya," the statement said.

"We call on all the Libyan actors to be inspired by the spirit of the holy month of Ramadan, engaging in resuming talks for a genuine ceasefire," said the statement, signed by the EU's Josep Borrell, France's Jean-Yves Le Drian, Italy's Luigi di Maio and Heiko Maas of Germany.

While the EU has maintained efforts for the implementation of an arms embargo in the conflict-ravaged country, a Maltese arms dealer was charged with violating EU's Libyan sanctions, local media reported Saturday.

James Fenech, 41, allegedly used two military-grade bots to transport private contractors out of war-torn Libya without notifying authorities, according to the Times of Malta newspaper.

Fenech and four other men were charged with sanction busting in a court in Valletta Friday, with the defendant having had an agreement with an Emirati company to transport personnel in and out of Libya.

"A mysterious Malta-registered boat found in the harbor or Zwetina, Libya, some 150 kilometers (93 miles) south of Benghazi, last August had raised suspicion that it was being used to sneak people in and out of the country, prompting Libyan authorities to launch an investigation," said the newspaper.

The investigation was also searching possible money laundering, police authorities said Saturday, with a request to freeze the assets linked to Fenech accepted by the courts.

Operation IRINI was launched with EU foreign ministers' approval on March 31. The mission aims to operate in the air and sea and uses satellites to ensure that all countries respect the ban on providing arms to the parties involved in the Libyan conflict. The EU forces will also watch for illegal oil exports, prevent human trafficking and contribute to the training of the local coast guard and navy as a complementary task.