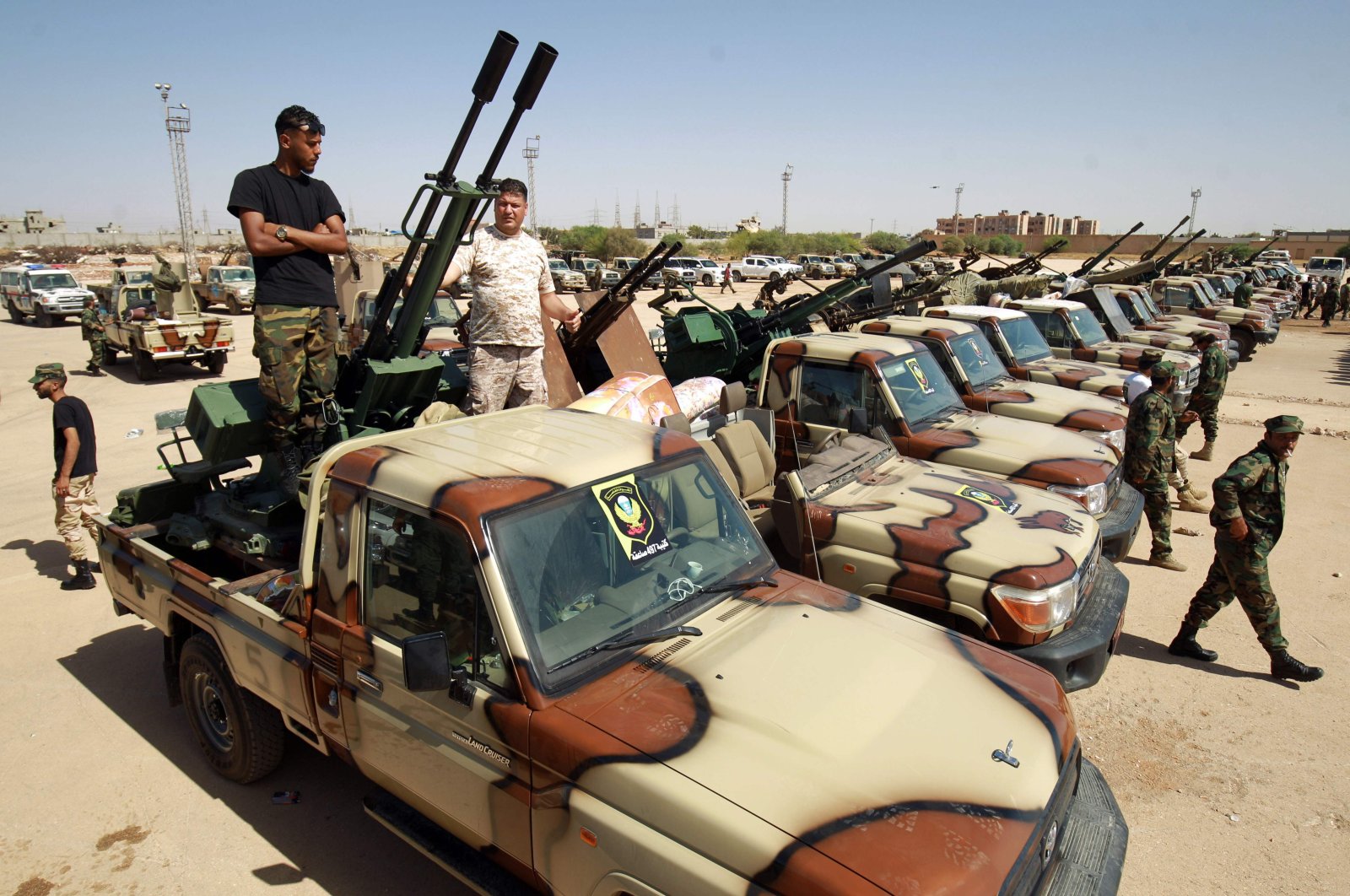 Forces loyal to putschist Gen. Khalifa Haftar gather in the city of Benghazi, on their way to back up fellow fighters on the front line west of the city of Sirte, Libya, June 18, 2020. (AFP Photo)
by DAILY SABAH WITH AA Aug 27, 2020 2:11 pm
RECOMMENDED

The eastern-based illegitimate forces loyal to putschist Gen. Khalifa Haftar have violated the cease-fire in the war-torn country, the Libyan Army announced Thursday.

It was reported that Haftar militias attacked Libyan Army forces with Grad missiles in the west of the strategically located coastal city of Sirte.

Abdulhadi Dirah, the spokesman for the army's Sirte-Jufra Joint Operations Unit, said: “Rebel enemy forces fired at least 12 Grad missiles targeting the area where our army forces are located by violating the cease-fire. There were no casualties.”

Fayez Sarraj, head of the Tripoli-based Government of National Accord (GNA), last week announced a cease-fire and called for the demilitarization of Sirte and Jufra area, which would mean the withdrawal of Haftar’s forces.

Both Sarraj and Saleh said they want an end to the oil blockade imposed by Haftar’s camp since earlier this year, which has stifled the Tripoli government. They also called for oil revenues, the country’s main source of income, to flow into the bank account of the National Oil Corporation outside Libya.

In another development, the Libyan government Thursday warned Haftar against continuous attacks and crimes in the cities of Sirte and Traghen, a small town in the Murzuk Desert in southwest Libya.

In a statement, the Libyan government expressed its "concern about the reports received from Sirte confirming attacks on residents of the city, arrests, and killing of civilians."

The government warned against the continuation of violations and crimes, saying it "will not stand by idly and will not neglect its duties towards protecting the Libyan people and seeking to move them peacefully to a more stable stage."

On Tuesday, Haftar forces had attempted to detain people from a local tribe called Qadhadhfa in Sirte, but when tribe members resisted, a civilian was killed by the militia. Following the development, the Qadhadhfa tribe announced Thursday that they have now withdrawn their support to Haftar.

Oil-rich Libya was thrown into chaos after veteran dictator Moammar Gadhafi, who also hails from the Qadhadhfa tribe, was ousted in a 2011 NATO-backed uprising. Rival administrations and militias have been vying for power ever since, increasingly drawing in foreign countries and threatening the region's stability.

Fighting has stalled around the central Mediterranean port of Sirte, the gateway to Libya's eastern oil fields and export terminals, and to the key Jufra air base to the south. Sirte lies roughly halfway between Tripoli in the west and Libya's second-largest city Benghazi in the east.

"Turkey is pursuing humanitarian and other activities in line with international law, and will continue doing so,” Turkish Defense Minister Hulusi Akar said Thursday on Turkey’s activities in the country.

Most recently, Algerian President Abdelmadjid Tebboune on Thursday praised the Libyan government for stopping the fighting in order to find a political solution to the country's conflict.

In a phone call with Sarraj, Tebboune stressed his country's support for the Libyan government and people.

In a statement, the Libyan government said: "Tebboune praised the statements (by the GNA and Libya's House of Representatives) which stress a political solution to the Libyan crisis and the holding of parliamentary and presidential elections as soon as possible."

For his part, according to the statement, Sarraj expressed his appreciation for Algeria's continuous support for the security and stability of Libya.