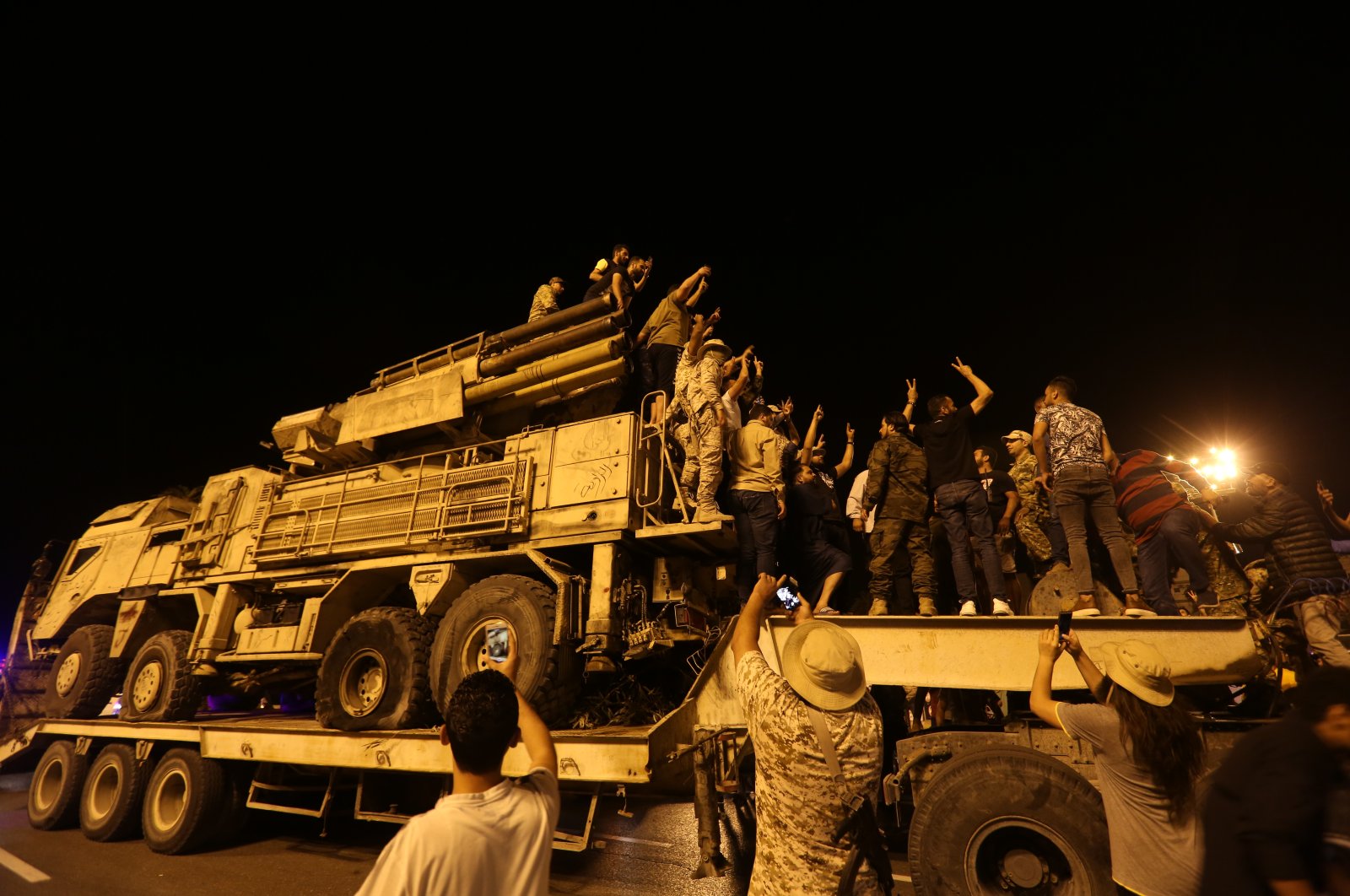 Members of the Libyan Army display Russian-made air defense systems confiscated at the Khalifa Haftar-held al-Watiya air base on the streets of Tripoli, Libya, May 20, 2020. (AA Photo)
by DAILY SABAH WITH AA May 21, 2020 10:42 am
Edited By Nurbanu Tanrıkulu Kızıl

Haftar militias continued to lose ground as the Libyan Army continued to hit targets in Tarhuna city, southwest of the capital Tripoli

The Libyan Army carried out five air operations against militias loyal to putschist Gen. Khalifa Haftar in the past 24 hours, military sources said early Thursday, as the warlord is losing ground after a series of successful operations.

Libyan military spokesman Col. Mohamed Qanunu said in a statement that the airstrikes were carried out against Haftar's militias in the city of Tarhuna, southwest of the capital Tripoli.

Two military vehicles and an ammunition carrier were destroyed and the army carried out observation flights over Tarhuna, it added.

Tarhuna is a major focal point for supply lines for Haftar's militias from the al-Jufra air base.

Libya's army on Monday took back al-Watiya air base occupied by Haftar's militias, a key facility now back under government control after some six years under putschist forces.

The move came after the Libyan Army destroyed three other Russian-made Pantsir-type air defense systems used by Haftar's forces that were supplied by the United Arab Emirates.

The UAE has spent a fortune supporting Libyan warlord Haftar despite his failures against his country's United Nations-recognized government.

Despite the international arms embargo on the war-torn country, in place since 2011, the UAE has been continually looking for ways to get heavy and strategic weapons to Haftar and his forces in eastern Libya to overthrow the government since 2014.

After the Libyan Army took control of the key al-Watiya air base from Haftar and seized the air defense systems supplied by the UAE, Abu Dhabi's financial support for the war has increasingly come under scrutiny.

According to data compiled by Anadolu Agency (AA) from U.N. reports and open sources, the UAE has also been using its regional and international ties in its quest to propel Haftar to replace the country's legitimate government.

The UAE also pays the salaries of a large number of foreign fighters-for-hire who have long fought for Haftar, such as the Russian mercenaries, Sudanese Janjaweed militias and Chadian armed rebels.

According to confidential documents by the U.N. Security Council's Libya Sanctions Committee, made available to AA, a UAE-based company sought to raid ships departing from Libya with six helicopters and two watercraft it purchased through a front company in Jordan, spending at least $18 million in support of Haftar.

According to a report on global military expenditures from 2015-2019 by the Stockholm International Peace Research Institute (SIPRI), the UAE was the eighth top arms-importing country during this period.

Emphasizing that despite having a relatively small population of 10 million and a small geography, the country makes 3.4% of all arms imports worldwide, the report pointed out, along with the fact that the UAE is one of the top providers of weapons and military equipment to Haftar.

Besides Chinese armed drones, the UAE has also transferred Belarusian helicopters to Haftar and recently purchased 4,569 MRAP-type armored personnel carriers from the U.S. worth $556 million for "personnel protection and humanitarian" operations.

The UAE has dispatched high quantities of military aircraft, heavy weapons and armored vehicles to the region and, according to air traffic observers, sent hundreds of cargo aircraft to Libya between Jan. 12 and Feb. 26.

The UAE's intervention in Libya, which began by supporting Haftar's militias, turned into a permanent presence in the country's territory via direct control and occupation of the al-Jufra and al-Khadim air bases.

According to U.N. reports, Egypt is also involved in violations in the Libyan war, allowing the UAE to use its territory.

Satellite images have shown that at least six Mirage 2000-9 fighter jets belonging to the UAE were stationed in the town of Sidi Barrani, located roughly 85 kilometers (53 miles) from Egypt's western border with Libya.

The UAE's Vice President and Prime Minister Sheikh Mohammed bin Rashid Al Maktoum, who is also the ruler of the Emirate of Dubai, had voiced concern last year on the country's foreign policy during a meeting of the leaders of each of its seven emirates.

"We should review our entire foreign policy. We are spending hundreds of millions of dollars every day. So, what do we earn in return?" asked Maktoum, emphasizing that the country should leave its aggressive and intrusive foreign policy as soon as possible.

He had said that there was no need to spend so much money in places where the UAE had no interests.

The Libyan Army recently liberated many towns from Haftar’s militia as part of Operation Volcano of Rage. After that, the military launched an operation to take al-Watiya air base, located 140 kilometers southeast of Tripoli, from Haftar. The airstrike came as a part of operations to cut off supplies to Haftar's militias.

Following the ousting of late dictator Moammar Gadhafi in 2011, Libya's legitimate government was founded in 2015 under a U.N.-led political deal. In the past few weeks, the Government of National Accord (GNA) has made significant gains against forces loyal to Haftar, supported by France, Russia, the UAE and Egypt, while some provinces announced their support for the official government after months of bombing and shelling by Haftar on civilians, hospitals and schools.