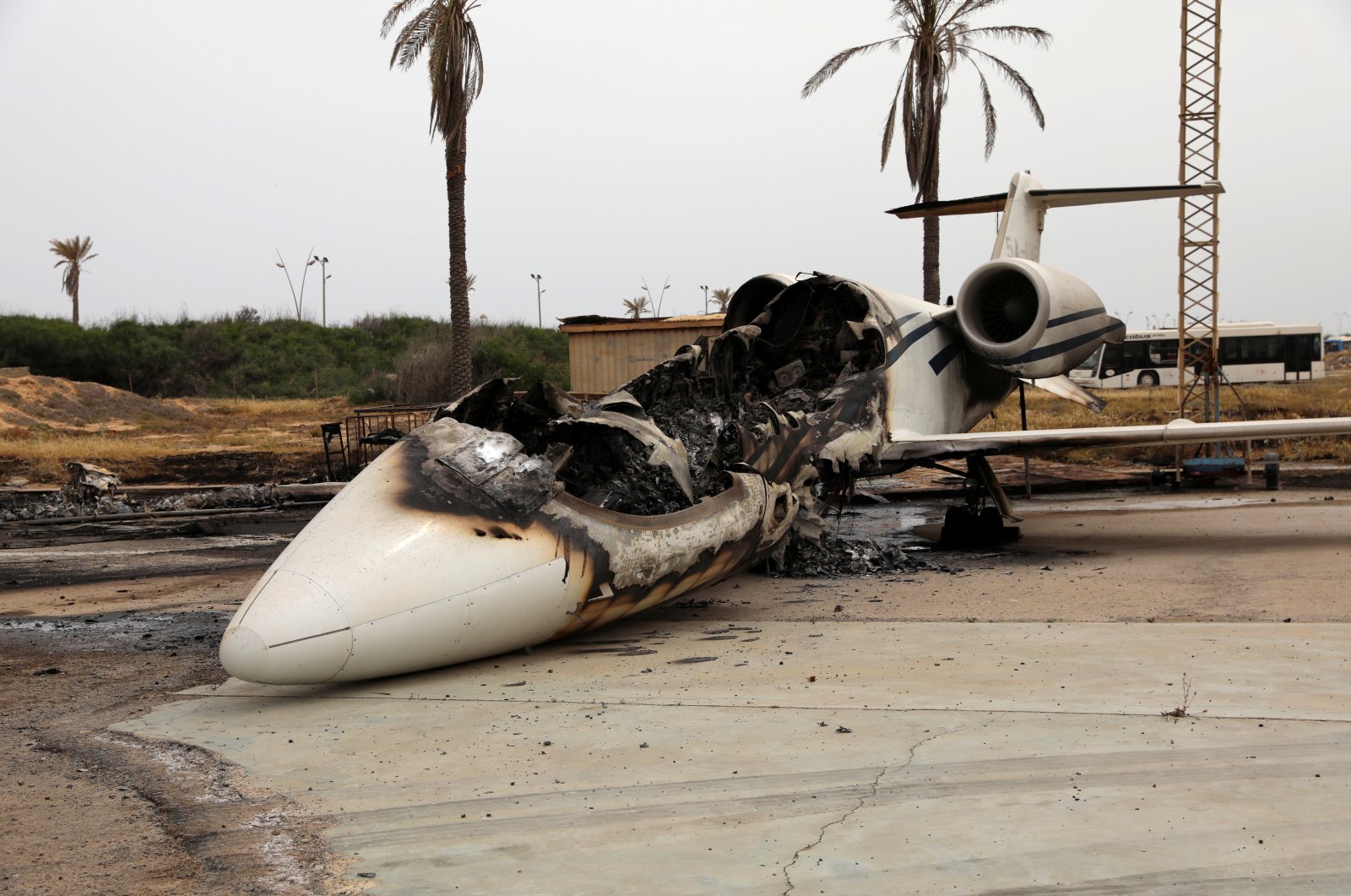 A passenger plane damaged by shelling is seen at Tripoli's Mitiga airport in Tripoli, Libya, May 10, 2020. (Reuters Photo)
by DAILY SABAH WITH AGENCIES May 10, 2020 5:43 pm
RECOMMENDED

Deadly attacks by putschist Gen. Khalifa Haftar on diplomatic missions in Libya and on Mitiga Airport "constitute war crimes," the Turkish Foreign Ministry said Sunday, adding that Haftar elements will be considered legitimate targets if they continue to threaten Turkey's interests in the country.

Libya's Government of National Accord (GNA) said at least four civilians, including a child, were killed when more than 100 rockets rained down on the capital Tripoli and its only working airport Saturday.

On Thursday, the area around Turkey and Italy's embassies in Tripoli was shelled by Haftar forces.

"It is unacceptable for the United Nations to remain immobile any longer in the face of this brutality," the statement added, stressing that the international community has the responsibility to stop Haftar from killing women, children and the elderly during the holy month of Ramadan and amid the coronavirus pandemic.

"It should not be forgotten that the countries that provide military, financial and political support to Haftar bear responsibility in the cruelty and instability faced by the Libyan people," it said.

Turkey will continue to support the legitimate GNA and its institutions in order to protect the people of Libya, the statement concluded.

At least four civilians, including a 5-year-old girl, were killed and more than a dozen others wounded in the working-class neighborhoods of Abu Slim and Ben Gashir south of the city Saturday, Libyan health ministry spokesman Amin al-Hashemi said.

The Tripoli-based Transportation Ministry said one of the damaged aircraft had been scheduled to leave Tripoli to bring back Libyans stranded in Spain by the coronavirus lockdown. It blamed east-based forces fighting to take the capital for over a year for the attack.

Saturday's attacks came hours after the U.N. Support Mission in Libya (UNSMIL) condemned the indiscriminate attacks on civilians in Tripoli, saying the attacks "may amount to war crimes." It said last month that Haftar forces were responsible for four-fifths of civilian deaths in the first quarter of 2020.

A withering bombardment shook Tripoli on Sunday as Haftar forces fought overnight for new territory in the southern suburbs after losing ground recently around the city.

Adding to the misery of Tripoli residents, the main water supplier to northwest Libya said armed men in the south had stormed one of its facilities, reducing supply.

"My father said we should be ready to leave at any moment ... the fighting last night was heavier than at any time before," said a resident of Abu Salim district, near a front line.

"We would leave to survive, but where can we go? ... we will be on the street. It's hopeless," the resident added by phone.

Tripoli residents described the bombardment as the worst so far after weeks of fighting as the GNA attempts to end Haftar's campaign to seize the capital and push his forces out of artillery range.

Mitiga, the only functioning airport in the Libyan capital, was targeted by rockets for a second day.

Water pressure in Tripoli was already starting to decline on Sunday afternoon after the Great Man-Made River Project, the main water utility, said one of its power stations in the south had been stormed by armed men.

Ahmed al-Deeb, head of its western region committee, said the men had switched off the electricity because of a shortage of cooking gas and a lack of cash in local banks, and that tribal elders were negotiating with them to restore power.