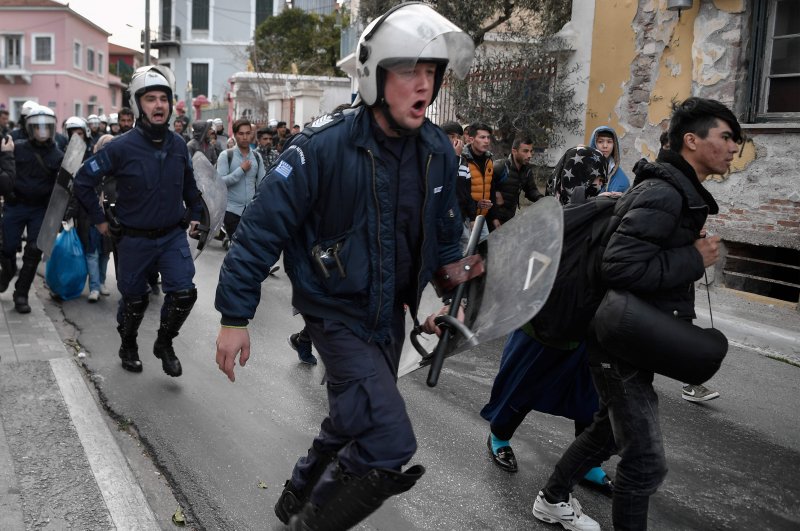 Greek anti-riot police run after migrants and refugees from the Moria camp who gathered outside the port of Mytilene on the island of Lesbos, hoping to get a ferry to Athens, on March 4, 2020. (AFP Photo)
by DAILY SABAH Mar 05, 2020 12:50 am
RECOMMENDED

Human Rights Watch on Wednesday urged Greece and the European Union to respect human rights in its response to Turkey’s new policy of not stopping migrants and asylum seekers trying to leave for Greece.

“Greece and its European Union partners should deliver a collective response to Turkey’s new policy of not stopping migrants and asylum seekers trying to leave for Greece,” Human Rights Watch said in a statement on Wednesday.

“The EU’s response should provide for shared responsibility, uphold the right to seek asylum, and guarantee humane and dignified treatment to all migrants,” the watchdog added in the statement. “On March 1, 2020, Greece’s Governmental National Security Council decided to effectively suspend access to the asylum system for a month for people who crossed the border irregularly, a measure for which there is no legal basis or justification,” the Watch added in the statement published on its website.

“The EU has an opportunity to show it can respond with compassion to the arrival of people fleeing conflict and persecution by putting their dignity and humanity at the center of its response,” Lotte Leicht, EU director at Human Rights Watch, was quoted as saying in the statement.

“In 2015, Human Rights Watch documented that armed masked men were disabling boats carrying migrants and asylum seekers in the Aegean Sea and pushing them back to Turkish waters,” the watchdog also reminded, before highlighting another incident caught on camera and reported by the BBC, Al Jazeera, and other media outlets. “Greek coast guards are seen firing into the sea near a migrant dingy, and shoving it around, as they attempt to force it back toward Turkey with the assistance of a speedboat with what appears to be masked men,” HRW said.

“If the EU’s highest officials are willing to turn a blind eye to such abuses and violations of international law, they will invite more of the same.”

Greek authorities should urgently act to curb vigilante violence, and investigate and prosecute those responsible, Human Rights Watch added in the statement.

“The EU and Greece’s leadership should publicly and unequivocally condemn such violence, and the criminal justice system should hold those responsible for the violence to account. Greek law enforcement officers should receive clear instructions that any use of force must be proportionate to the need. The authorities should urgently investigate reports of excessive use of force by law enforcement officials and hold those responsible to account,” HRW concluded.

Greek Migration Minister Notis Mitarachi announced late Wednesday that Greece will transfer migrants who arrived on its territory illegally after March 1 to the northern city of Serres and plans to deport them back to their own countries.

Thousands of migrants have headed for Greece since Ankara said on Feb. 28 that it would let migrants cross its borders into Europe. Ankara's decision rolls back its previous commitment to hold them in its territory under a 2016 deal with the EU.

Hundreds have made it into Greece, many by sea to Lesbos and other Greek islands. Ankara and Athens are accusing each other of using excessive force at its shared borders, where migrants have clashed with security forces in recent days.

"Our aim is to return them to their countries," Mitarachi told the Athens News Agency.

He also said migrants who entered the country prior to Jan. 1, 2019, and were already living on the islands would be transferred to the mainland in the coming days.

Greece announced on March 1 that it would not accept any new asylum applications for a month following the buildup of migrants at the border. This has triggered criticism from human rights agencies.

Turkey accused Greek forces of shooting dead one migrant and wounding five others, a charge strongly denied by Greece.

Turkey's change in policy came after 33 Turkish soldiers were killed by Russian-backed Syrian regime forces in an airstrike in Syria.

No dinghies were sighted in the choppy seas off the Greek island of Lesbos on Thursday following several days of migrant arrivals. Lesbos already hosts more than 20,000 asylum seekers, many of them living in filthy conditions in overcrowded camps

Turkey, which already hosts 3.6 million Syrian refugees and faces another influx from an upsurge in fighting in northwest Syria, says it cannot take in any more and complains that EU aid falls short of what is needed for the refugees.