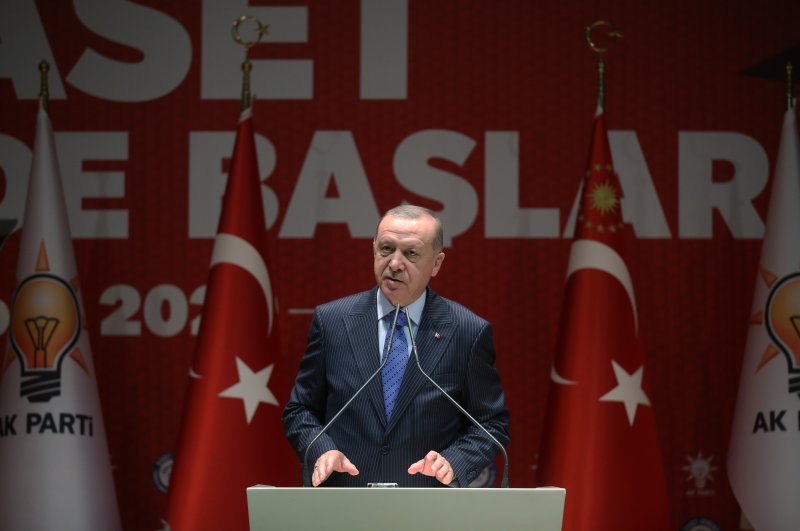 President Recep Tayyip Erdoğan said the situation in northwestern Syria's Idlib province has evolved in Turkey’s favor, as he highlighted Turkey’s determination to achieve its goals in the region.

Speaking at the opening ceremony of the ruling Justice and Development Party’s (AK Party) Politics Academy conference, Erdoğan said Turkey has successfully turned the tide in Libya, where the situation was in favor of putschist Gen. Khalifa Haftar, and is doing the same in Idlib.

The Turkish-backed opposition forces recaptured the strategic town of Saraqib in Idlib Thursday.

Saraqib is on a strategic crossroad connecting the country’s two main highways, M4 and M5. The M4 motorway connects the port city of Latakia to the Iraqi border while the M5 forms the backbone of the country's highways, connecting economic hub Aleppo to the central cities of Hama and Homs, the capital Damascus and to the Jordanian border further south.

The Bashar Assad regime seized Saraqib in a Russian-backed assault earlier this month.

The opposition forces backed by Turkey are continuing their advance with intense artillery cover fire, according to opposition sources.

Erdoğan noted that three Turkish soldiers have been killed in the Assad regime attack in Idlib, adding that the regime forces suffered heavy casualties after the Turkish military retaliated against them.

The president also criticized Russia once again for supporting the Assad regime, which is carrying out a ruthless campaign in Idlib, completely disregarding the lives of civilians.

“It is not possible to see Assad, who has killed hundreds of thousands of his citizens, as a friend,” Erdoğan said, in response to main opposition Republican People’s Party (CHP) Chairman Kemal Kılıçdaroğlu’s call to communicate with Assad to solve the Syrian crisis.

“Assad regime would have completely disappeared if it did not have Russia’s backing,” Erdoğan said, adding that Turkey’s involvement in Syria is completely legal under the scope of the Adana Agreement.

The Adana agreement was signed between Turkey and Syria in October 1998, stating that Syria would not allow any PKK activities within its borders and would block any terror activities that would threaten Turkey's sovereignty. However, with U.S. support and Russia’s indifference, the terrorist organization established an autonomous rule in northern Syria, near the Turkish border, taking advantage of the power vacuum arising due to the collapse of the regime’s authority.