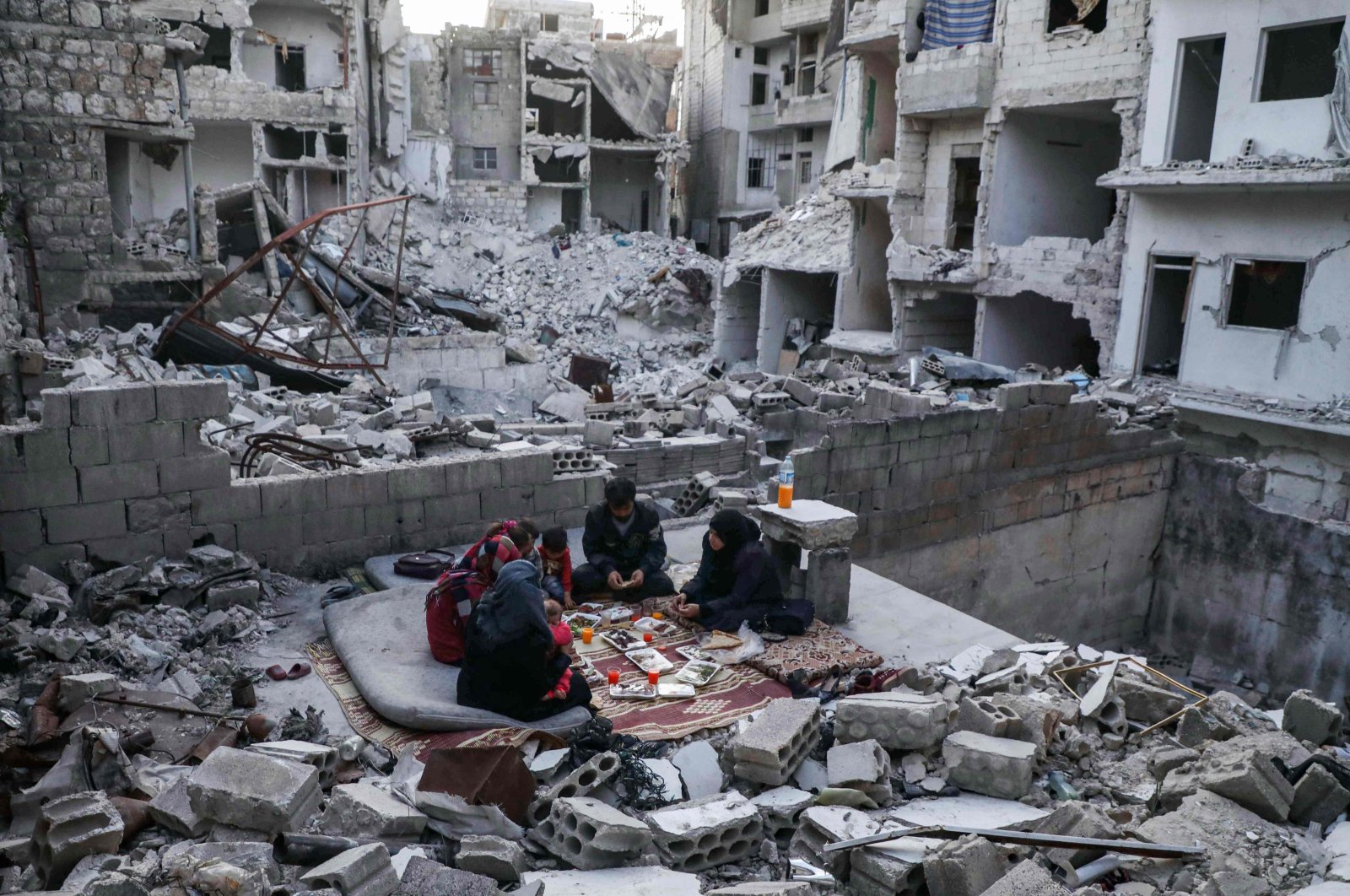 Members of the displaced Syrian family of Tariq Abu Ziad, from the town of Ariha in the southern countryside of Idlib province, break their fast together for the sunset "iftar" meal in the midst of the rubble of their destroyed home upon their return to the town, May 4, 2020. (AFP)
by Daily Sabah with AFP May 06, 2020 12:10 pm

Although the destruction left by Bashar Assad's attacks continues to haunt Idlib, civilians try to survive with the help of aid deliveries, increased now during the holy month of Ramadan

Syrians in Idlib welcomed a bittersweet Ramadan this year, with the March cease-fire allowing them the chance to have a relatively peaceful holy month despite the surrounding ruins serving as a stark reminder of previous attacks from the not-too-distant past.

As dusk settles over the surrounding sea of gutted buildings, Tareq Abu Ziad and his family break the Ramadan fast over the remains of their home.

The northern Syrian town of Ariha looks like the aftermath of a monstrous earthquake – a silent, grey sea of loose cinder blocks and mangled iron rods.

Abu Ziad made a little clearing in the rubble of his roof to lay three foam mattresses down for his wife and children to sit on as they shared their meal.

“Now my family and I are here on top of the destruction,” the 29-year-old father of three says, explaining: “We are reliving a very difficult and painful memory. I pray that God doesn’t let anyone else experience this."

He and his family fled Ariha late last year when Syrian regime troops backed by Russian airstrikes launched an offensive against the town. Within a few weeks, around a million civilians fled the assault on the wider Idlib region, the last stronghold of opposition to the Bashar Assad regime after nine years of war. Ariha’s entire population headed north as much of the town was razed to the ground. But as the cease-fire holds, some of the most destitute have since opted to return to look for cheap accommodation amid the ruins.

Abu Ziad came back last month and found a place to stay. But he wanted to share at least one iftar, the meal that breaks the dawn-to-dusk fast, where his home used to be.

“Every year we used to spend Ramadan here and we wanted to spend one day of this Ramadan here,” he says. The home’s kitchen is long gone, but Abu Ziad’s mother says they came prepared. “We brought ready meals from outside,” she explains: “The most important thing is that we relive our memories and eat in our home."

In Idlib city center, however, with the coming of Ramadan, steps toward normalization have started to take place despite the threat of the coronavirus. People have started once again to shop for the holy month, with bazaars being reopened and offering festive trinkets to mark the Ramadan spirit.

A cease-fire was reached in Moscow after talks aimed at containing the escalating conflict. Relations were strained prior to the agreement, with both sides trading accusations of having violated the Sochi deal, which created a buffer zone and allowed for the setting up of 12 Turkish observation posts. Several previous deals to end the fighting in Idlib have collapsed.

Since April 2018, attacks on the last opposition stronghold have intensified, causing more than a million refugees to move toward the Turkish border, putting the country, which already hosts 3.7 million Syrian refugees, in a difficult position.

According to the U.N., about 1 million Syrians have fled Idlib and its surrounding countryside this past year due to the attacks, as overcrowded settlements are teeming with fresh arrivals, and many of the displaced are forced to sleep in freezing temperatures in open spaces. As the tentative peace holds, displaced Syrians are weighing up a series of grim options: remain in tightly packed camps with few services where a viral spread could be lethal or return to homes still at risk of getting caught in renewed conflict.

So far, since the cease-fire, about 235,000 displaced Syrians have been able to return to their homes. Mohammad Hallaj, director of Syria's Response Coordination Group, which carries out work on migration data in the region, said last week that the displaced civilians' return to their hometowns continued as the cease-fire held. However, since these civilians are at the risk of encountering unexploded bomb remains as well as a lack of infrastructure and basic needs, they are still in need of major humanitarian aid.

The camps in northwestern Syria, however, are densely populated and insufficient relief is reaching the people there. The health and education sectors are also struggling to provide the required services.

In order to ease the difficult conditions and make sure that no one suffers during the holy month, Turkey's Humanitarian Relief Foundation (İHH) distributes iftar food to 2,500 displaced civilians in the province every day.

Speaking to Anadolu Agency (AA), Zeki Tahiroğlu, the head of the Reyhanlı bureau of the charity's Syrian activities, said that with Ramadan, humanitarian aid in the war-torn province had accelerated.

"At a kitchen that we have established in Idlib, hot iftar meals for 2,500 people are being prepared every day, to be distributed at the refugee camps," he said, adding that more aid was needed in the region.

The United Nations also continues to provide weekly aid to the war-torn province, with the latest delivery taking place on Tuesday, when 52 truckloads of humanitarian aid were dispatched to Idlib.

Trucks loaded with supplies entered Syria through the Cilvegözü border gate in Turkey's southern Hatay province, which borders Idlib. The supplies will be distributed to people in the city of Idlib and nearby rural areas.