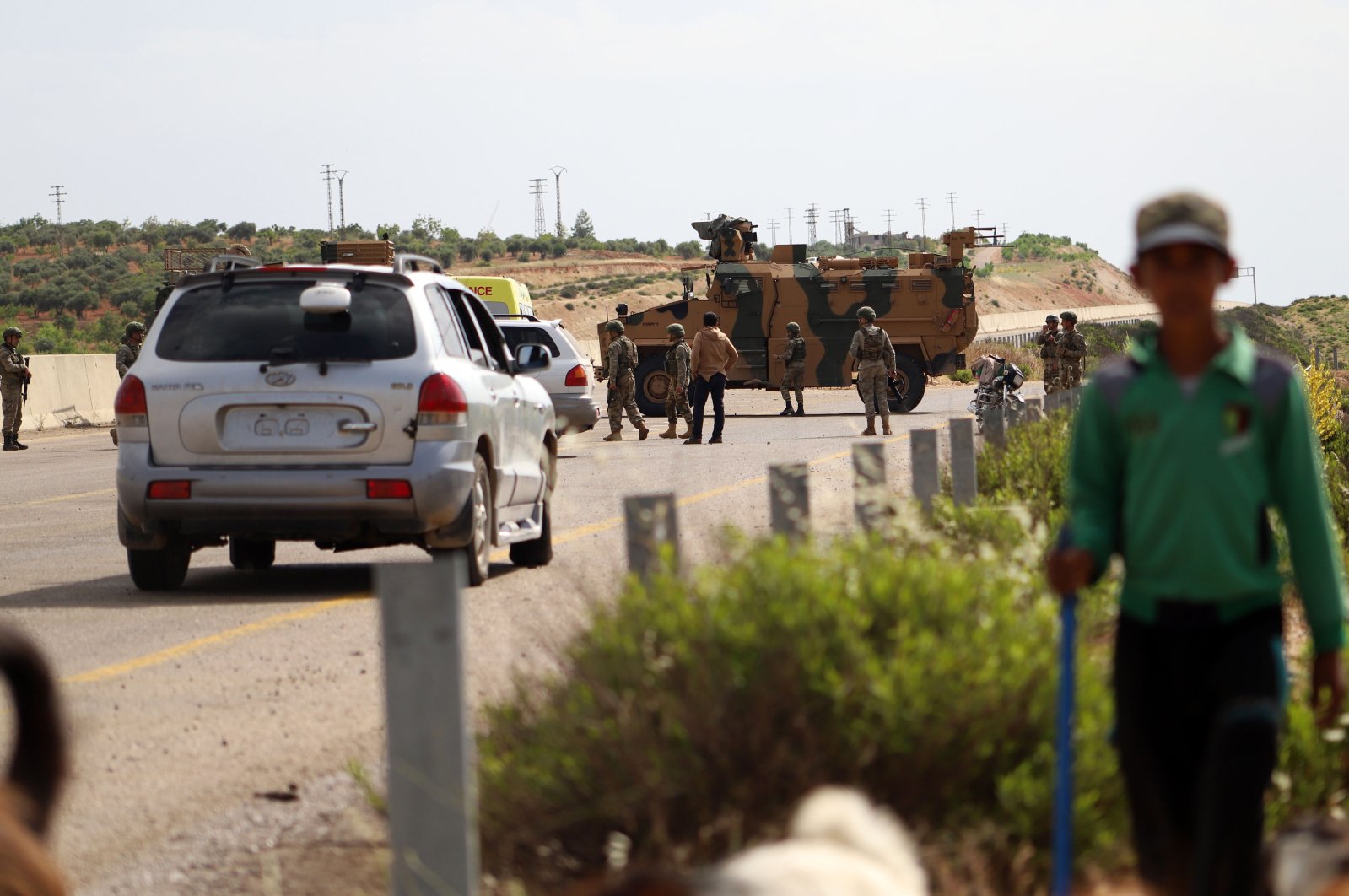 A shepherd boy leads his flock near Turkish soldiers standing outside an armored vehicle, part of a joint Turkish-Russian military patrol, along the M4 highway in Ariha in the opposition-held northwestern Syrian province of Idlib, June 2, 2020. (AFP Photo)
by DAILY SABAH Jun 07, 2020 2:17 pm

Highlighting that the humanitarian crisis in Idlib has not been resolved yet, Soylu called on the international community to prove their sincerity for global solidarity

Speaking before his meeting with civil society representatives in Turkey’s southern border city Hatay, Soylu called on the international community, particularly Western states, to prove their sincerity in the case of Idlib.

“Although the Idlib issue has been no longer the main topic of conversation due to the virus, unfortunately, the conditions there did not improve by itself or this issue has not been resolved,” he said and added that a serious humanitarian catastrophe is still going on in front of the world’s eyes.

In Syria's northwest, some 3 million people were trapped in a shrinking opposition bastion battered by months of bombardment, especially in Idlib. The population of the province had gradually increased with many people running from regime attacks and terrorist torture.

The displacement of civilians intensified since mid-December when the Russian-backed Bashar Assad regime started a new assault to seize the last opposition bastion. It is estimated that over 1 million Syrians have moved near the Turkish border due to intense attacks over the last year, while half of this number was displaced after November 2019.

As a result, Turkey, which has the second-largest army in the NATO alliance and already hosts nearly 4 million Syrians, has funneled troops and equipment into the region to stop the Syrian regime's advance and to avoid a fresh tide of refugees.

After heightened tensions, Russia and Turkey in March reached an agreement to halt violence and the flow of displacement. Despite a relatively calm prevailing, displaced civilians are still in dire need of humanitarian aid.

Reminding of solidarity scenes around the world during the coronavirus pandemic, Soylu said that those who claim that we are living in a world of love should not turn their back on the ongoing developments in Idlib.

He also added that it is not only the problem of Syrians or Turkey, but it is also a problem for all humanity.

The camps in northwest Syria are densely populated, and there is insufficient relief reaching them, while the health and education sectors struggle to provide the required services. Even though nongovernmental organizations, the United Nations and Turkish institutions and relief organizations struggle to meet the needs of the many civilians in the war-torn country, in the face of the new coronavirus threat, there are still thousands more who need urgent assistance from the international community.

In a situation where even the most developed and modern countries are desperate in the fight against the virus, it is hard to expect a country with almost no standing hospitals and where children cannot find water to wash their hands to cope with the threat. Only half of the countries’ medical facilities are still operating.

The risk of an outbreak is especially high and most alarming in Syria's northwest, where overcrowded settlements are teeming with fresh arrivals. Moreover, the overcrowded camps, unfit for living during the global pandemic, are often plagued by poor hygienic conditions and fires that erupt frequently, spreading easily to the other tents nearby.

Most recently, seven tents in a camp in western Idlib have been destroyed due to a fire that erupted in the camp on Sunday.

According to initial findings, high temperatures caused the fire in low-quality nylon-made tents. In a very short time, flames spread to other tents nearby.

While no casualties have been reported, nearly 50 people including children found themselves without any shelter.