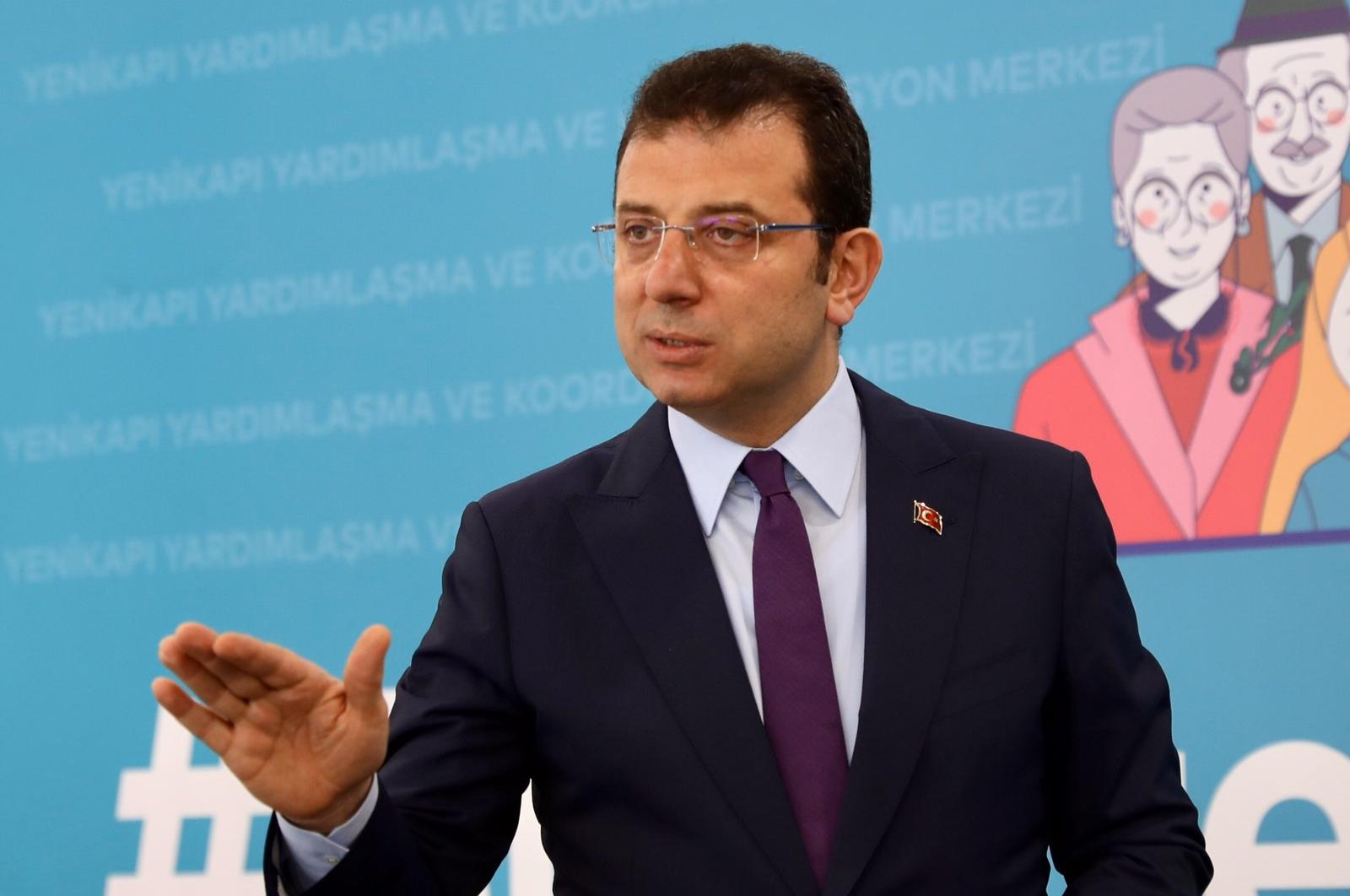 Istanbul Metropolitan Mayor Ekrem İmamoğlu speaks to reporters after a meeting at the Istanbul Governorate on Saturday, March 28, 2020 (AA Photo)
by DAILY SABAH Apr 01, 2020 9:03 am
Edited By Nurbanu Tanrıkulu Kızıl

An aid package containing food items prepared by the Istanbul Metropolitan Municipality has been criticized for being overpriced, as the actual cost of the package is much lower than the requested price

Istanbul Metropolitan Municipality (İBB) and Mayor Ekrem İmamoğlu came under fire for seeking support for an allegedly overpriced food package campaign that would be delivered to needy families affected by the coronavirus pandemic. After receiving criticism, the municipality announced that they would include a package containing soap and hand sanitizer, but many were not convinced as the products were not initially included in the parcel.

The food package in question is sold for TL 150 ($22.5) and contains a liter of sunflower oil, three packages of pasta, a kilo each of flour, bulgur (cracked wheat), chickpeas and lentils, a jar of tomato paste, a pack of tea, cookies, wafers, tahini halva, 500 grams of olives, and an unspecified amount of salt and sugar.

Users took to social media, questioning the mayor and municipality about the high price of the aid package.

Fox Turkey news anchor Fatih Portakal, who is a staunch critic of the ruling Justice and Development Party (AK Party) government and was roommates with the mayor during their college years, was one of the people who questioned the price of the package on his Twitter account.

“This is a nice gesture but! I checked the list and its value and the price seemed expensive to me. I asked the price of these goods to a market I frequent and two other large grocery stores and one of them said it would cost TL 98 while the other two said TL 120 and TL 102,” Portakal said. He also asked if there was anything in the package that was not specified on the list and who purchases these products.

İBB Spokesman Murat Ongun responded to the criticism, saying that there is an additional “hygiene pack” containing soap and hand sanitizer with the food package.

“People who want the food package can choose to buy it, or they can donate TL 150 if they would like. İBB always serves its people in a transparent and qualified manner,” he said.

Twitter users flooded Ongun’s post with criticism, saying that he is backpedaling and adding items that had not initially been included in the package following the negative reaction.

“Stop making absurd statements, you are driving people nuts. We are commenting on whatever had been specified on the image and then you claim there is soap and sanitizer,” user Muharrem Kaşıtoğlu said.

Another user posted a similar campaign by a small-scale relief organization, which included a package with similar food items for TL 100. The relief organization’s poster also included the brands of the products, which Twitter users said was more transparent than İBB's notice.

Twitter users also claimed the products can be purchased from local supermarkets for much cheaper prices, as they pointed out that the municipality would buy the products directly from wholesalers rather than retailers.

Nationwide campaigns were launched to provide assistance to families most affected by the coronavirus pandemic. President Recep Tayyip Erdoğan on Monday announced a nationwide campaign to help citizens who were financially affected by the coronavirus pandemic. Announcing the "We are self-sufficient, Turkey" campaign, Erdoğan said he will donate seven months of his salary as a way to kick-start the fundraiser and added that several ministers have already joined in as well. On Tuesday, prominent names, from mayors and governors to politicians, announced their donations as well, giving away at least three months' worth of salary.