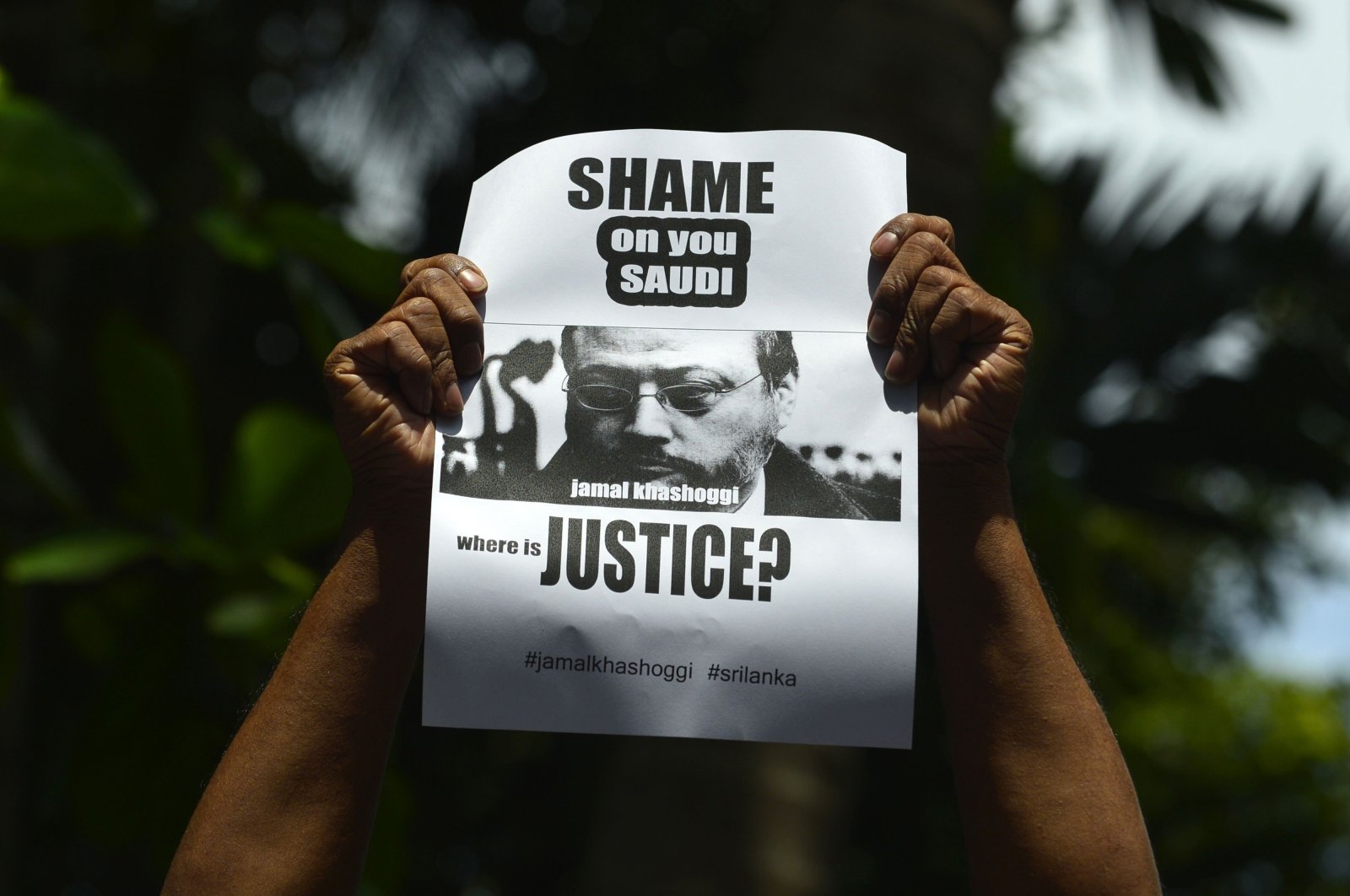 A member of the Sri Lankan web journalist association holds a poster with the image of Saudi journalist Jamal Khashoggi during a demonstration outside the Saudi Embassy in Colombo, Oct. 25, 2018. (AFP)
by DAILY SABAH Apr 13, 2020 11:28 am
RECOMMENDED

A Turkish court has accepted an indictment on the 2018 killing of Saudi journalist Jamal Khashoggi in the Saudi Consulate in Istanbul. The indictment reveals the details of the trial in Saudi Arabia where five defendants received capital punishment.

Istanbul’s Heavy Penal Court No. 11 on Saturday received the 117-page indictment, prepared by Istanbul prosecutors. It accuses 20 Saudi nationals of involvement in the gruesome murder. It also includes reports from the trial in Saudi Arabia, which was monitored by the members of the Turkish embassy in Riyadh, according to the daily, Yeni Şafak.

After receiving detailed reports on each hearing, the Turkish Foreign Ministry delivered the reports to the investigation units, which examined them and included them in the indictment.

Khashoggi, a former columnist for The Washington Post, was killed and dismembered by a group of Saudi operatives shortly after he entered the country’s consulate in Istanbul on Oct. 2, 2018.

His body was never recovered.

Khashoggi, according to reports by the U.N. and other independent organizations, was very likely killed on orders of Saudi Crown Prince Muhammad bin Salman (MBS).

After nine hearings, five suspects of the hit squad, including the No. 2 man of the hit squad, Maher Abdulaziz Mutreb, and Dr. Salah Muhammed al-Tubaigy, the head of forensic evidence at the Saudi General Security Department, who was in charge of dismembering Khashoggi’s body, received the death penalty.

In the first hearing, the prosecutor read the accusations and confessions of the 11 suspects one by one, in 1 hour and 15 minutes.

The prosecutor’s reading revealed once again the details of the hit squad’s plans. For instance, it first thought of burying the body in the consulate’s garden but abandoned the idea due to the possibility of it being found.

Then, upon the order of Mutreb, the body was dismembered and put into black sacks. The prosecutor read that it was then planned that the sacks would either be delivered to a local collaborator or be transported out of Istanbul.

One of the suspects, Mansour Othman M. Abbahussain, confessed that he came to Istanbul two days before the murder in order to meet with the local collaborator, whose name was not mentioned during the hearings.

Another suspect, Faad al-Balawi confessed that they dismembered the body upon the orders of Mutreb. Mutreb, on the other hand, claimed that he did not have the intention to kill in the beginning and he was trying to negotiate. Tubaigy also claimed that they killed Khashoggi “by mistake” and can pay a price to his family if necessary.

While the head of the hit squad, Mansour Abu Hussein, said he received the news on Khashoggi’s killing from Mutreb during a dinner at the consulate’s residence, one of the suspects, Muflih al-Musih, claimed that he learned about the incident from the press. Another suspect, Mohammad al-Zahrani, went as far as to claim that he received the information after being detained.

The indictment states that suspect Abbahussain, working as a major general and intelligence officer in Saudi Arabia, was tasked in the office of MBS and was instructed by Ahmed Bin Mohammed al-Asiri to bring Khashoggi back to the country and kill him if he resisted. It added that Abbahussain assembled a 15-man hit squad, including himself, for the murder.

Abbahussain also determined the place to meet Khashoggi as the working office at the Istanbul consulate and made plans for all contingencies before, during, and after the deed.