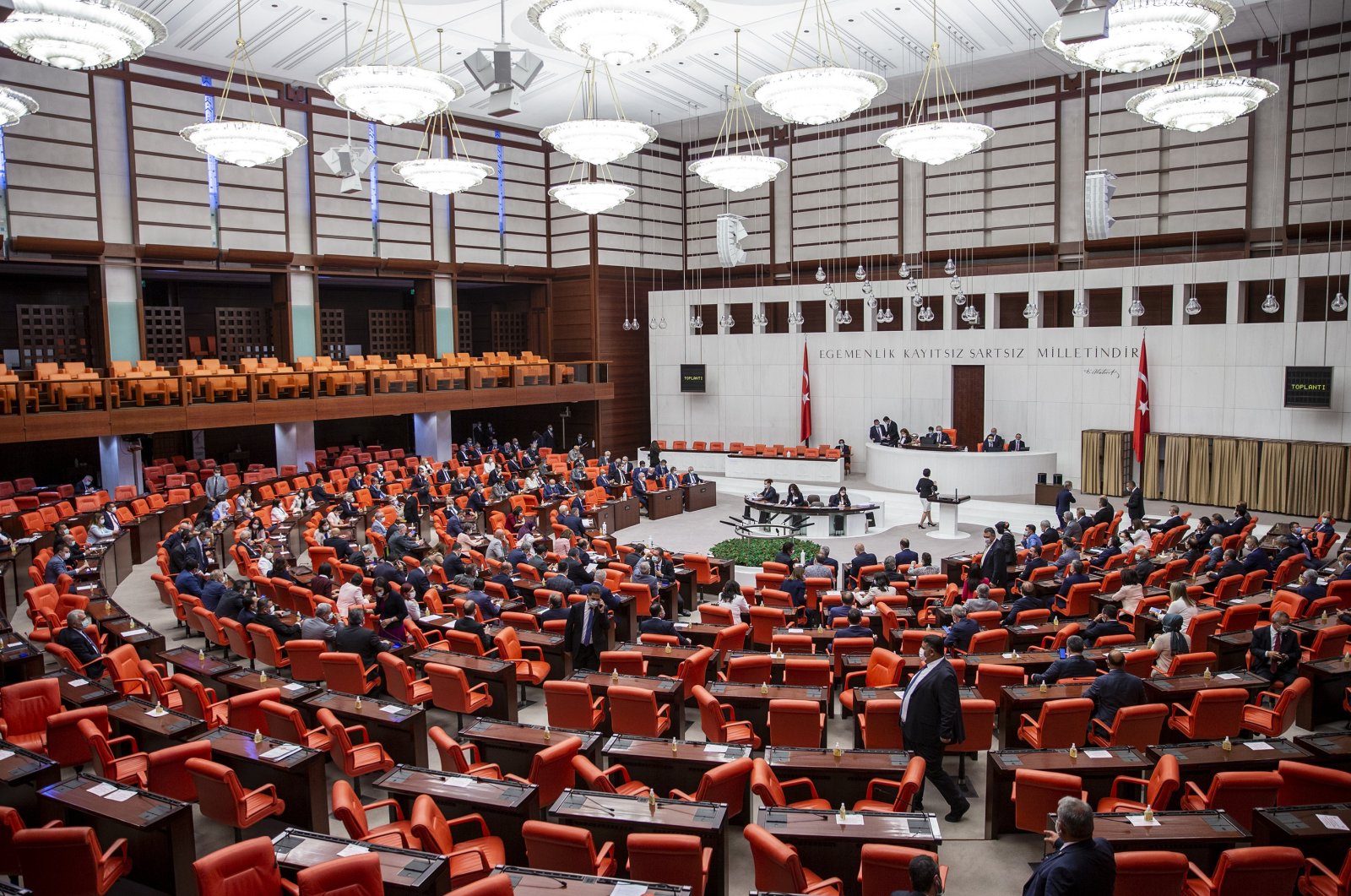 The Turkish Parliament addressed the issue of domestic violence and femicide with a discussion that took place during a plenary session on Wednesday, July 22, 2020. (AA Photo)
by DAILY SABAH WITH AA Jul 22, 2020 11:28 am
RECOMMENDED

Turkish politicians on Wednesday condemned a recent spate of violent attacks against women. President Recep Tayyip Erdoğan, members of Parliament and other politicians expressed deep grief and anger over the brutal killing of a university student by her ex-boyfriend in the southwestern province of Muğla on Tuesday.

"The violent killing of Pınar Gültekin yesterday grieved us. I condemn all the crimes against women." Erdoğan said in a statement shared on his Twitter account on Wednesday.

Emphasizing that such violence does not have a place in Turkish civilization, understanding and culture, the president said that joint action is needed against these crimes.

"I have no doubt that the killer of Pınar Gültekin will take the heaviest punishment that he deserves," Erdoğan said, indicating that he will personally follow the case, and the Turkish state will do its best to avoid similar crimes in the future.

Speaking on the issue in an exclusive interview with Turkish TV broadcaster A Haber on Wednesday, the chairman of the Nationalist Movement Party (MHP) Devlet Bahçeli also said that he demands the heaviest punishments for the perpetrators of such crimes.

Regarding the killing of Gültekin, the MHP leader said his grief is "huge," while condemning all abusive and violent acts against women.

The Turkish Parliament also held a discussion on domestic violence and femicide on Wednesday.

Gültekin's body was discovered on Tuesday after she was reported missing on July 16. The murder renewed online protests against women’s murders. Parliament addressed the issue with a discussion that took place during a plenary session Wednesday, mostly between members of the ruling Justice and Development Party (AK Party) and the People's Democratic Party (HDP).

Domestic violence claimed the lives of 932 women between 2016 and 2018. Turkey is striving to eradicate the disturbing phenomenon by increasing prison terms for perpetrators and awareness campaigns denouncing violence targeting women, a product of a twisted patriarchal mindset. Forty women were killed in the first two months of 2020, according to the latest available data.

Social media users also widely denounced the murder. Most users shared the simple message of “enough!” accompanied by a smiling photo of Gültekin while others shared names of women whose murders by their partners made headlines in recent years, accompanied by petitions calling for legal change.

However, despite pointing at a heated issue that was occupying the country's agenda, Kaya's remarks soon after used against her party since some HDP deputies, Mardin Deputy Tuma Çelik and Muş Deputy Mensur Işık, have been accused of rape and domestic violence crimes, respectively, over the past week.

Earlier last week, Işık was accused of beating his wife in Ankara. The party has launched a probe to investigate the allegations. However, as the party was trying to deal with the issue, a new scandal emerged with the news of Çelik raping a female party member.

According to the victim’s testimony, the HDP deputy suggested that they work together in the election campaign. “I told him that I was having some family issues and could not accept his offer, but Çelik asked me over to his place to have coffee and discuss my problems,” the victim, identified with the initials D.K., told authorities in her testimony. She continued by saying that Çelik brought her to the home of the Syriac Associations Federation President E.T. in Midyat. “He raped me after we had coffee,” she said, adding that he threatened her after she told him that she would file a complaint about him to the party.

Although Çelik has resigned from the party following the accusations, whether or not the HDP has acted properly over his actions still triggers debates. In this respect, several AK Party deputies reacted to Kaya's remarks, accusing him and his party of being hypocritical while calling on them to be held accountable for the actions of their deputy.

"Have you tried to silence the woman who was the victim of rape or not? Explain this," said the AK Party's Denizli deputy Nilgün Ök.

Kaya responded: "I have learned his actions during the lockdown period (due to the pandemic.) I was the one who had the firmest stance against him." She added that she never had any interactions with the victim before since she does not know her.

As the discussions on the issue heated up, the deputy parliamentary speaker Haydar Akar held a break to the session.

Following the break, AK Party's Group Deputy Chairman Özlem Zengin took the stage and noted that for a long time, the Parliament has been witnessing harsh remarks and accusations against the women deputies of the AK Party. Targeting the HDP for claiming to be the biggest defender of women's rights while accusing the AK Party of being the main reason behind the escalation of femicide in the country, Zengin said that the HDP fails to realize its own part and faults in these matters.

"What you claim should be in accordance with your actions," Zengin said.

"The incident (of Çelik's domestic violence) took place back in 2008. When this incident occurred, we realized that the victim first tried to reach out to you, to the women deputies of the HDP. However, she failed to find anyone to listen. Now that the incident has been publicized, you claim that you have taken this and that action against these crimes," Zengin said regarding the HDP's questionable actions. Zengin added that as long as the HDP acts this way, they don't have the right to attack the AK Party over such issues.

Underlining that it is everyone's responsibility to take a joint stance against domestic violence and femicide, Zengin said that the opposition parties, especially the HDP, are "silent partners" in these crimes.

After her speech, the debate escalated again, prompting a second break.

Then, HDP's Group Deputy Chairman Hakkı Saruhan Oluç took the stage and said: "We don't have the luxury to avoid this debate."

He stated that they were not aware of Çelik's crimes until they heard it from the victim herself on Aug. 19, 2019, and immediately after learning of it, the women's council of the HDP had a meeting with the victim.

"Although the women's council asked her numerous times if there was any rape or assault against her, she did not report such crimes," he claimed, adding that the party gives high value to these issues and therefore, even though there were no crimes reported at that time, the HDP still launched an investigation into the incident.

Similarly, in a statement on the case, the party previously said that the incident had been discussed at the disciplinary board on June 30, the party had launched a probe into the allegations, and it suspended all of Çelik's political activities within the party and the Parliament. However, the HDP women’s council claimed that the woman did not tell them that she was sexually assaulted at E.T.’s home in Midyat. The victim, on the other hand, noted that she had spoken with HDP lawmakers and sought their support, especially from female deputies. However, female deputies allegedly criticized her for accepting Çelik’s invitation for coffee in the first place.

As the debate continued, Akar took the floor and said: "We all know that this is a real, societal problem. It is not possible for any political party to solve this problem by itself. It can only be solved by joint action."

Following the debate, yesterday, the parliament formed a commission to investigate Çelik's case and remove his deputyship.