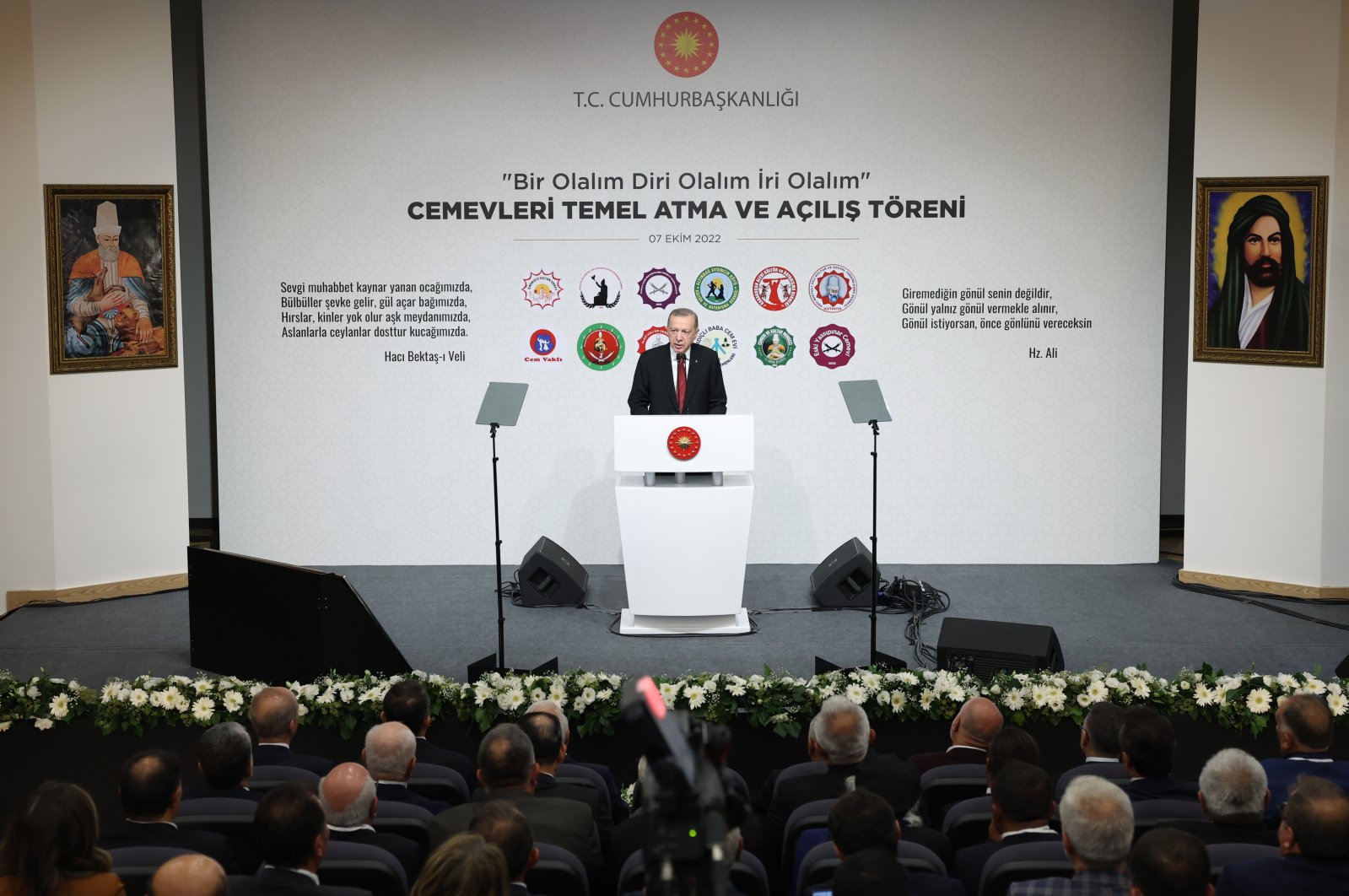 President Recep Tayyip Erdoğan on Friday announced a new initiative for the country's Alevi community and said that Türkiye will establish a "Culture and Cemevi Presidency."

The institutional body to be formed by the government will handle the affairs and address the problems Alevi citizens face, Erdoğan said during a visit to the Şahkulu Sultan Cemevi – an Alevi house of worship – in Istanbul. He also attended a ceremony to inaugurate the newly built complex in the cemevi and inaugurated other cemevis in a mass ceremony.

"We are establishing an institutional structure that will follow up and execute the issues of the places where Alevi and Bektashi citizens come together," he said.

"All problems related to the lighting, drinking and utility water, construction, repair and maintenance expenses of the cemevis will be solved.

"Alevi-Bektashi faith leaders, who are responsible for carrying out the ceremonial services in cemevis, will be able to be appointed within the body of this institutional structure," he added.

As part of the national unity and solidarity work carried out under the coordination of the ministries of culture and interior, 1,585 cemevis were visited and the interlocutors were listened to, Erdoğan said.

"The Presidency of Alevi-Bektashi Culture and Cemevi, which we will establish, will manage the cemevis affiliated with mukhtars, associations, municipalities and federations," he explained.

In a parliamentary group meeting of his ruling Justice and Development Party (AK Party) on Tuesday, the president had said he would announce new steps to meet the expectations of Alevis, despite attempts to provoke them against the country.

The government has taken action to address the needs of the community. Under the coordination of the Interior and Culture and Tourism Ministries, all 1,585 cemevis in the country were visited by officials.

As a result of the visits, officials came across 8,740 demands and have already responded to 5,600 of them.

Both ministries have also sped up work to address other demands of Alevi citizens.

In July, Turkish officials condemned attacks targeting cemevis, including three in Ankara and one in Istanbul’s Kartal district.

Alevis, who make up the second-largest religious community in the country with approximately 20 million followers, have a list of concerns about various issues, including the public recognition of their identity, the legal status of cemevis and funding, as well as the prerogative for Alevi students to be excluded from compulsory religion classes in elementary and high schools.

The cemevis are currently regarded as foundations under the Interior and Culture and Tourism Ministries, rather than recognized as houses of worship, which would legally entitle them to receive state funding like mosques, churches and synagogues of recognized religious minorities in the country. Some 80% to 90% of all cemevis in the country were built during the successive AK Party governments since 2002.

The Alevi faith is explained as a combination of Shiite Islam, the Bektashi Sufi order and Anatolian folk culture, rather than a separate religion.

In 2009, the first Alevi initiative was launched during the term of then-Prime Minister Erdoğan. Alevi leaders and representatives attended several workshops with the government over a six-month period. Later in 2011, Erdoğan issued an unprecedented apology on behalf of the Turkish state for the Dersim tragedy, which took place in 1937, when 13,806 people were killed following a military campaign after the predominantly Alevi Zaza Kurdish tribes opposed the 1934 Resettlement Law passed by the Republican People's Party (CHP) during the single-party regime.

The discussion process was interrupted during the Gezi Park riots in 2013, but an "Alevi opening" initiative was launched in 2014, and a council was formed to discuss issues in 2016, but there have not been any concrete developments since.