Libya: Cease-fire deal will not affect agreements with Turkey 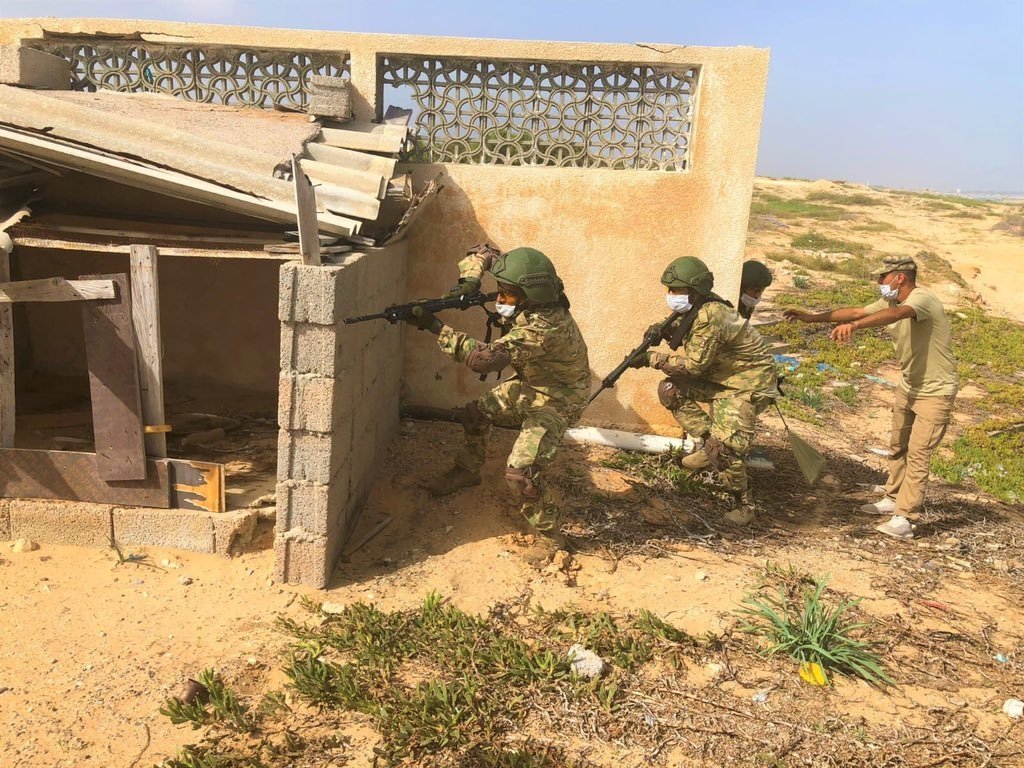 The Turkish Foreign Ministry has confirmed that Turkey continues to train the Libyan Army, Oct. 24, 2020. (Courtesy of the Turkish Defense Ministry)
by DAILY SABAH
Oct 26, 2020 10:44 am

The permanent cease-fire agreement reached in Geneva between rival Libyan parties will not have an effect on military deals with Turkey and cooperation with Ankara will continue, Libya’s defense minister stated late Sunday.

Touching upon the cease-fire agreement signed under the leadership of the U.N. Support Mission in Libya (UNSMIL) between delegations representing the legitimate Libyan government and putschist Gen. Khalifa Haftar, Libyan Defense Minister Salaheddin al-Namroush said: "The signing of the initial agreement does not include the military cooperation agreement with the state of Turkey, an ally of the legitimate government."

"We affirm the strengthening of cooperation with our Turkish ally and the continuation of the training programs that have been received and will be received by affiliates at the training institutes of the Ministry of Defense of the Government of National Accord (GNA)."

The cease-fire reached on Friday – which is to be implemented country-wide – stated that with immediate effect, “until the new unified government assumes its functions, all military agreements on training inside Libya shall be suspended and training crews shall depart the country.”

However, Namroush underlined that this did not include cooperation with Turkey. Noting the possibility that Haftar's militias may not comply with the truce, he said the accords on security and military training must be focused on now more than ever.

The defense minister said one of the most important benefits of bringing peace to Libya is building a Libyan army on sound foundations and forming a comprehensive national doctrine for future generations.

The High Council of State similarly said in a statement that "the agreement does not include the legitimate agreements with Turkey."

The council also noted that the agreement does not annul the war crimes committed by Haftar's militias in their attacks on the capital Tripoli and said those responsible for the mass graves in the city of Tarhuna should be held accountable.

The GNA was founded in 2015 under a U.N.-led agreement. Unfortunately, efforts for long-term political settlement have failed due to military offensives by forces loyal to Haftar, who is backed by Egypt, France, the United Arab Emirates (UAE) and Russia.

In the face of Haftar’s aggressions, Ankara and the Tripoli-based internationally recognized government last year reached two separate memorandums of understanding (MoU), one on military cooperation and the other on the maritime boundaries of countries in the Eastern Mediterranean.

Within this scope, Turkey has started providing military training to 120 Libyan soldiers.

The Turkish Defense Ministry on Saturday, following the cease-fire deal, had reiterated that the military training, cooperation and consultancy given to the Libyan armed forces continues and shared photos of the training.

Meanwhile, dozens of Libyan delegates on Monday opened a political dialogue via videoconference as a step toward holding elections after the landmark cease-fire.

UNSMIL said the political talks, which it is brokering, would pave the way for a "direct, in-person meeting" of the Libyan Political Dialogue Forum (LPDF) on Nov. 9 in the Tunisian capital.

The goal of the LPDF would be to "generate consensus on a unified governance framework and arrangements that will lead to holding national elections," it said.

It said 75 Libyan delegates were taking part in the forum, including representatives of the rival parliaments and civil society activists, several of them women. High-ranking officials were not involved.

Participants were "drawn from different constituencies, based on the principles of inclusivity, fair geographic, ethnic, political, tribal and social representation," it said.

"During the online consultation meeting on Monday participants ... will be briefed on the intra-Libyan economic and military tracks facilitated by UNSMIL," the U.N. mission added.

UNSMIL urged participants to "shoulder their responsibility before the Libyan people and engage constructively and in good faith in the talks and to uphold the interests of Libya."