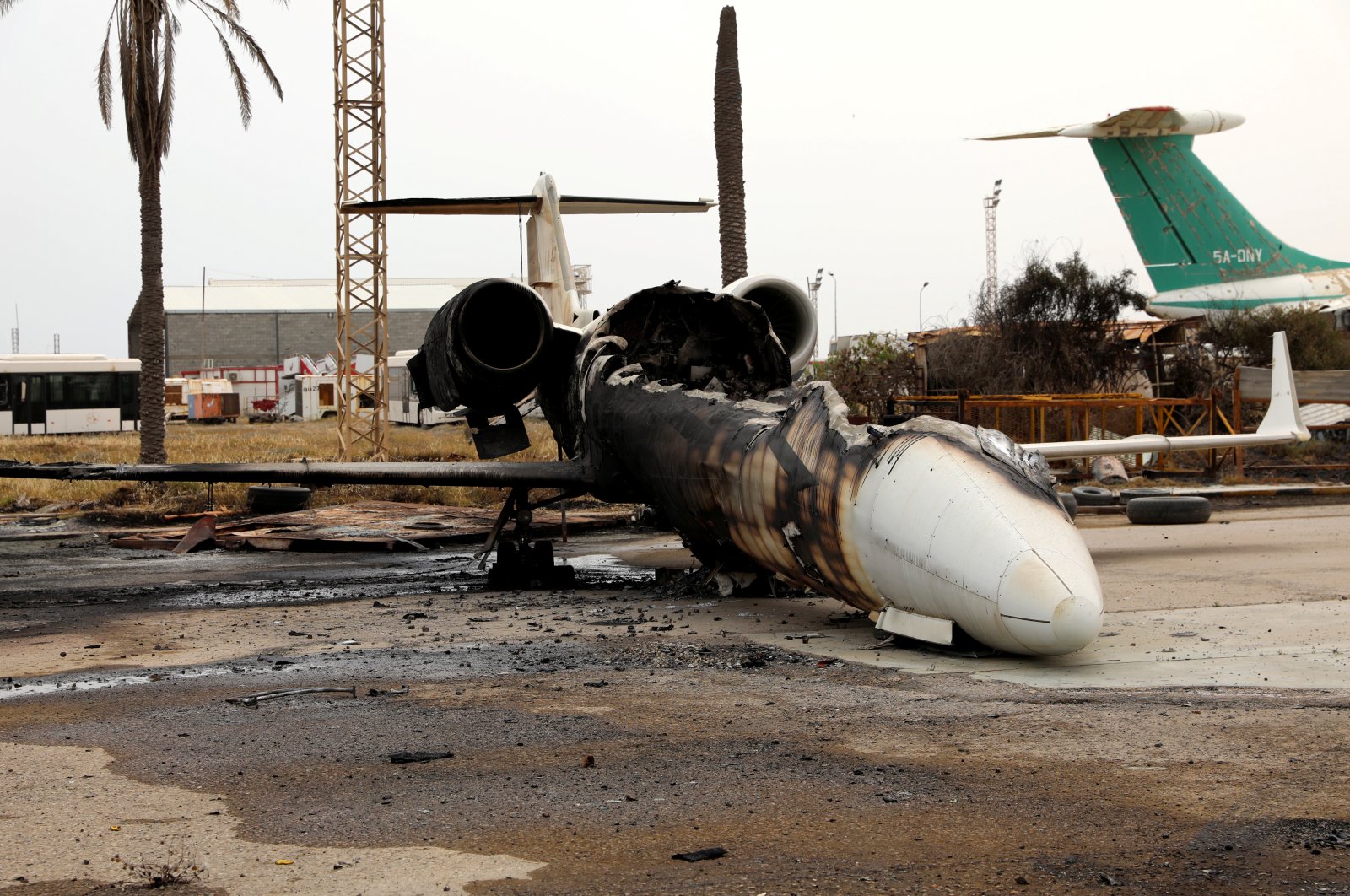 A passenger plane damaged by Haftar shelling seen at Mitiga airport Tripoli, Libya, May 10, 2020. (Reuters Photo)
by DAILY SABAH WITH AA May 13, 2020 10:05 am
Edited By Nurbanu Tanrıkulu Kızıl
RECOMMENDED

"The Air Force succeeded in destroying two troop carriers with more than 10 Janjaweed mercenaries [Sudanese militia] supporting the Haftar militia in Wadi Marsit," the Libyan government-led Operation Volcano of Rage said in a statement on Facebook.

The airstrike came as a part of operations aiming at cutting supplies to Haftar's militias.

Air elements of the Libyan army also targeted the key al-Watiya Air Base occupied by forces loyal to renegade commander Haftar three times over the course of 24 hours, Muhammed Kununu, the military spokesman for the government, said Tuesday.

He said reconnaissance flights were also conducted in central and western areas in order to monitor the movements of Haftar's militias in the field.

Earlier in the day, the Libyan army's artillery units also attacked posts at al-Watiya Air Base as well as a base used by mercenaries of Russia's Wagner Group, which supports Haftar.

Al-Watiya, which is currently controlled by forces loyal to Haftar, is regarded as a key air base in the country and is second only to Mitiga International Airport.

It was captured in August 2014 by Haftar, who used it as his headquarters for operations in the western part of the country. Haftar is the leader of illegal armed forces in eastern Libya.

Meanwhile, Libya’s Head of the High Council of State Khalid al-Mishri told the German envoy Oliver Owcza that the warlord has no place in the future of the country, the council’s media office said Tuesday. In a phone call, al-Mishri and Owcza discussed developments in the country, the COVID-19 outbreak and the necessity to resume dialogue.

Haftar has intensified attacks on civilians since the beginning of May as the Libyan Army recently gained an advantage and inflicted severe losses on his militias.

Russia's Wagner Group is one of the most controversial among mercenary groups. It is owned by Yevgeny Prigozhin, a businessman with close links to Russian President Vladimir Putin.

According to reporting by Bloomberg, the Wagner Group brought over 1,000 militias to Libya, including Russian pilots, who carried out training activities for Haftar troops. Bloomberg also said Russian Sukhoi-22 type warplanes were seen in Libyan skies.

Putin, asked about Russia's involvement in the Libyan conflict, replied that no Russian servicemen were in Libya acting on behalf of the Russian state or receiving payment from Russia.

Since the ouster of late dictator Moammar Gadhafi in 2011, two seats of power have emerged in Libya: Haftar in eastern Libya, supported by Egypt and the UAE, and the Government of National Accord (GNA) in Tripoli, which enjoys U.N. and international recognition.

Previously, Wagner was accused of trying to bring back Gadhafi's son Saif al-Islam into power. According to an article penned by Samer al-Atrush for Bloomberg, two Russian agents working for the Wagner Group were caught last year by the GNA.

The documents stored in the hard disks of the captured Russian agents revealed that the agents met three times with al-Islam, who was wanted by the International Criminal Court (ICC).

In the meetings, al-Islam claimed that 80% of the fighters loyal to Haftar are his supporters and if they capture the capital, those fighters would support al-Islam, according to the notes of Russian agents.