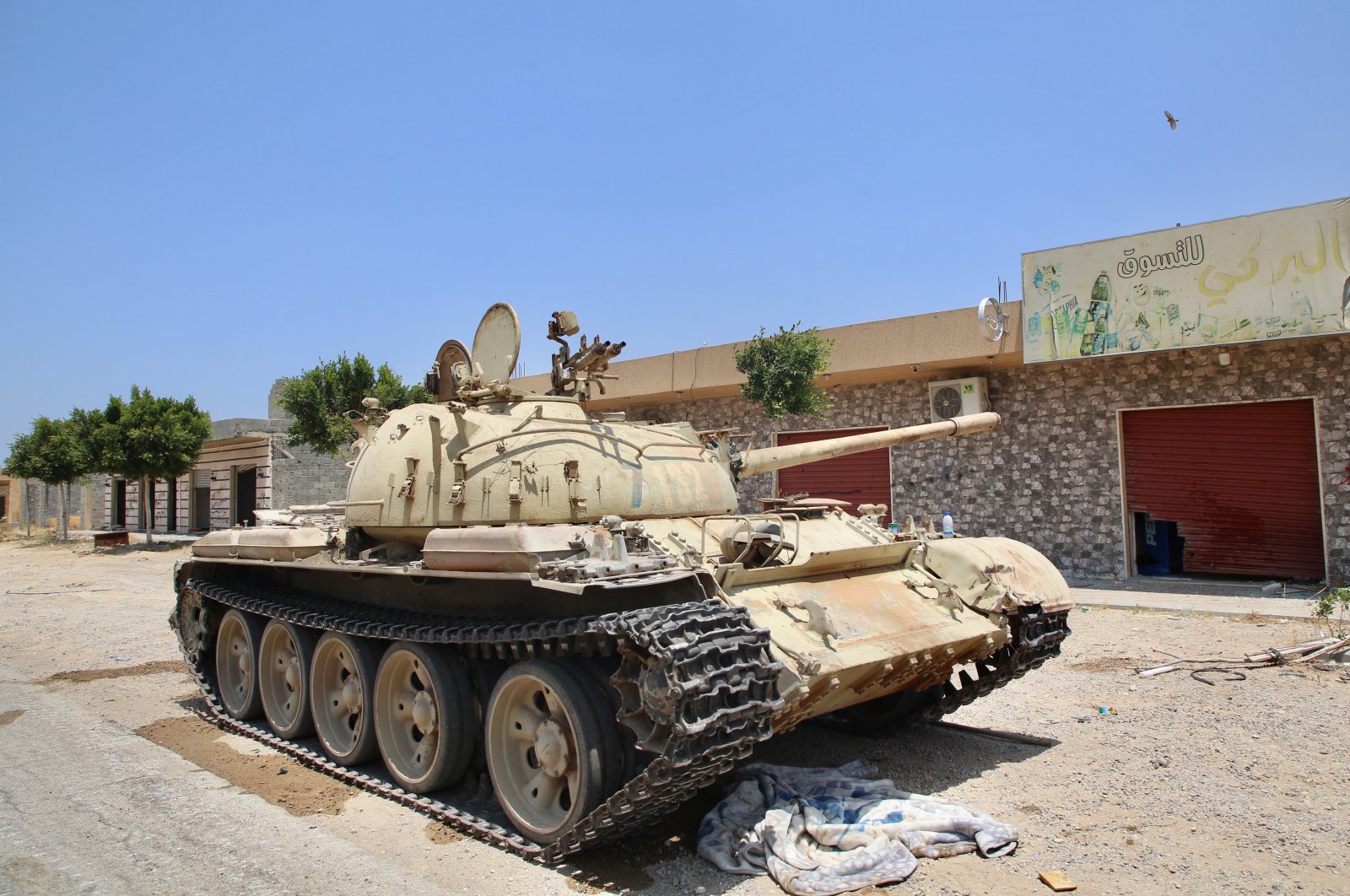 A Libyan Army tank is pictured in areas near the Libyan capital, from where Haftar's forces withdrew, Tripoli, June 2, 2020 (AA Photo)
by DAILY SABAH WITH AGENCIES Jun 03, 2020 10:44 am
Edited By Dilara Aslan

Libya's internationally recognized government forces have announced that they will be mounting an operation to liberate Tripoli International Airport from putschist Gen. Khalifa Haftar's forces, who continue to target civilians as they retreat from the capital

The Libyan Army has officially announced the launch of an operation to liberate Tripoli Airport, south of the country's capital, from putschist Gen. Khalifa Haftar’s forces, who just recently have retreated from their former positions, leaving at least 48 dead.

"We are officially announcing the start of the battle to liberate the airport," Libyan Army spokesman Muhammad Qanunu said Wednesday, according to the army's official Facebook account.

Later in the day, the Libyan Army further announced that it launched an operation into Tarhouna, southeast of Tripoli, from three points. The spokesperson of the Burkan al-Ghadab (Volcano of Rage) operation told Anadolu Agency (AA) that the operations against Haftar militia were ongoing, adding that the army is determined to seize the last Haftar-occupied province in the west, Tarhouna.

On Tuesday, the Libyan Army said Haftar’s militias had left 48 corpses behind while fleeing from formerly held positions.

Qanunu provided no further details in his statement but said they had been ordered to take all measures to safeguard against the novel coronavirus while collecting the bodies.

Touching upon the situation in Libya, Turkish Foreign Minister Mevlüt Çavuşoğlu said on Wednesday that Haftar had no chance of victory without foreign support. Speaking on a live broadcast on Kanal 24 news channel, Çavuşoğlu added that no agreements in the Eastern Mediterranean would be valid without Turkey's input.

On Nov. 27, Turkey and Libya's Tripoli-based Government of National Accord (GNA) signed a bilateral memorandum after a meeting between President Erdoğan and GNA head Fayez Al Sarraj took place in Istanbul. Following the deal, the Turkish Parliament in January passed a motion allowing for the deployment of troops to Libya for one year in order to respond to threats from illegitimate armed groups and other terror groups working against both countries' national interests.

The deal enables Turkey to secure its rights in the Mediterranean while preventing any fait accompli maneuvers by other regional states.

According to the U.N. Convention on the Law of the Sea, a country is able to extend its territorial waters only 12 nautical miles out to sea – yet, when it comes to founding an exclusive economic zone, in which it has the right to fish, mine and drill, the area can be expanded an additional 200 miles.

However, if the maritime distance between the two countries is less than 424 miles, a bilateral deal is needed to determine a mutually agreed-upon dividing line for their respective exclusive economic zones.

Turkey has the longest shoreline in the Eastern Mediterranean, making it a natural candidate for seeking reserves in the region in accordance with international law.

The presence of the Turkish Cypriot government in Northern Cyprus also strengthens Turkey's hand. The country has defended the rights of Turkish Cypriots in the region and insists that their consent is needed for any type of drilling activity.

On Sunday, Haftar's forces set off to recapture the strategic town of al-Asabaa, about 50 kilometers (31 miles) south of the capital, after launching airstrikes on militias in the area.

Control of the town gives Haftar’s forces better access to Tarhuna, their main western stronghold and supply line southeast of the capital.

Haftar’s gain more broadly reflects the seesawing nature of the war, which in recent weeks has turned dramatically in favor of the Turkish-backed Libyan Army that ousted Haftar’s forces from a key western air base and several towns.

Libya's internationally recognized government has been under attack by Haftar's forces since April 2019.

In March, the Libyan government launched Operation Peace Storm to counter attacks on the capital, and recently regained strategic locations, including Al-Watiya air base, in a major blow to Haftar's forces.

Libya has been torn by civil war since the ouster of late ruler Moammar Gadhafi in 2011. Libya's new government was founded in 2015 under a U.N.-led agreement, but efforts for a long-term political settlement failed due to the offensive by warlord Haftar's forces.

Haftar’s militia is supported by France, Russia, Jordan, the United Arab Emirates and other key Arab countries. The government in Tripoli is backed by Turkey, which deployed troops and mercenaries to help defend the capital in January, as well as by Italy and Qatar.

The civil war has seen a critical reversal recently as, thanks to Turkey's support, the United Nations-backed Libyan Army has been advancing – gradually making one strategic gain after another.

Mercenaries, mainly from the Syria battlefield, are now fighting on both sides and complicating the already complex proxy war, according to U.N. experts.

U.S. and Libyan officials have accused Russia of deploying fighters from the Wagner Group in key battleground areas in Libya, and last month, in an unusually bold statement, the U.S. military accused Russia of deploying 14 aircraft to eastern Libya to help Haftar’s forces, saying the move was part of Moscow’s longer-term goal to establish a foothold in the region that could threaten NATO allies. Russia dismissed those claims as “stupidity” and has repeatedly denied playing any role in Libya’s fighting.

The U.N. Mission in Libya announced the agreement on a new round of cease-fire talks late Monday, expressing hope they would “mark the beginning of calm on the ground" and allow the country’s war-scarred health system to cope with the coronavirus outbreak in the country.

Meanwhile, the United Nations said Tuesday it expects “things to get moving in the next few days” following the agreement by Libya’s warring parties to resume cease-fire negotiations following days of heavy fighting.

U.N. spokesman Stephane Dujarric said acting U.N. envoy Stephanie Williams and the U.N. mission had remained in direct contact with the government in the capital Tripoli, as well as Haftar’s east-based militias “to figure out the next steps and the logistics about the resumption of the talks.”

Dujarric said U.N. Secretary-General Antonio Guterres added his voice in welcoming the agreement to resume negotiations and calls on the parties to engage constructively and in good faith.

COVID-19 has infected at least 168 people in Libya, but testing is extremely limited. The impact of a large outbreak would likely be severe given the continued fighting and the state of the country’s health system.

The U.N. Mission said delegates from the rival parties will conduct the cease-fire talks through video calls because of the pandemic.

Following the U.N.'s statement on the expectations for a cease-fire, Deputy Prime Minister Ahmed Maiteeg of Libya's GNA arrived in Moscow for talks on Wednesday, the RIA news agency reported.