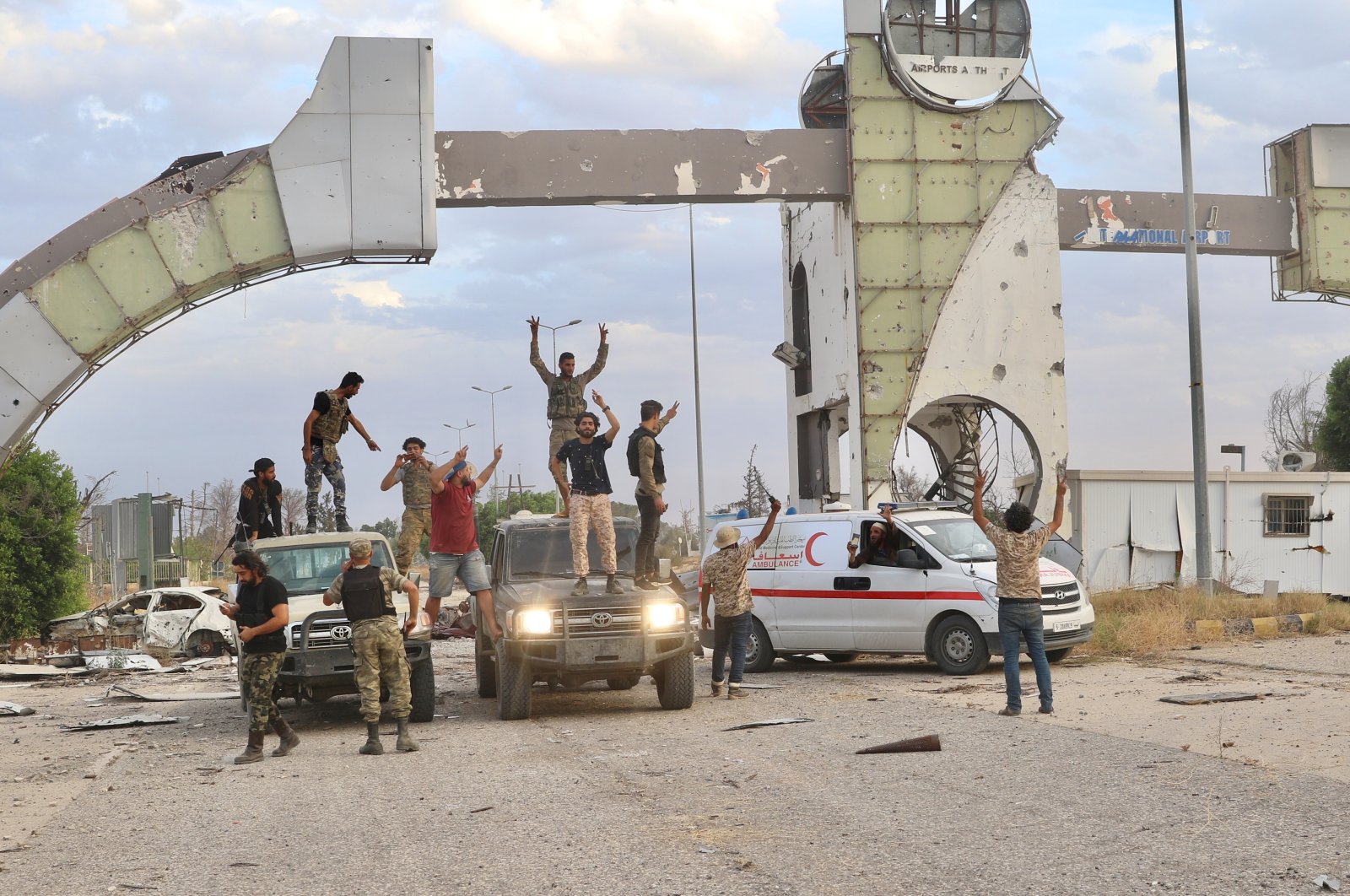 Pro-government forces pose in front of the entrance of the Libya International Airport in Tripoli on Wednesday, June 3, 2020 (AA Photo)
by DAILY SABAH WITH AGENCIES Jun 04, 2020 9:16 am

The Libyan Army has taken full control over the country's capital from putschist Gen. Haftar's forces and have reached the borders of Tarhuna after successfully retaking the international airport in Tripoli

The Libyan Army regained control over capital Tripoli and is advancing toward the strategic city of Tarhuna against putschist Gen. Haftar’s forces, sources said Thursday, as the Prime Minister is expected to hold talks with Turkish President Recep Tayyip Erdoğan.

The Government of National Accord (GNA) military operations room said in a statement it had control over all borders of the Tripoli city administrative area.

"Tripoli has been liberated and fully secured, and we have reached the administrative borders of the city of Tarhuna, southeast of the capital," said Mustafa al-Majei, the spokesperson of the Burkan Al-Ghadab (Volcano of Rage) Operation.
Al-Majei confirmed that the Libyan Army has entered the Fam Malgha area of Turhuna, 90 kilometers (56 miles) from Tripoli.
"The military vehicles of putschist Khalifa Haftar's militia have been seen withdrawing from Tarhuna towards the city of Bani Walid," 180 km (112 miles) southeast of Tripol, al-Majei added.

Separately, a Haftar source said it would complete its withdrawal on Thursday from the Tripoli districts of Ain Zara, Abu Salim and Qasr Ben Gashir towards a town near its stronghold of Tarhuna.

Meanwhile, Libyan Prime Minister Fayez al-Sarraj called on young members of warlord Khalifa Haftar's militias to lay down their arms as the army liberated two more towns following the retake of the airport in Tripoli.

Speaking to Libya February TV on Wednesday, al-Sarraj appealed to the country's tribal and opinion leaders to create an atmosphere dominated by freedom of expression, dialogue and civil state principles.

He called on young people deceived by Haftar, who he described as a "war criminal," to surrender to the legitimate government.

He said Haftar's militias were defeated by the Libyan army and had to withdraw, noting the militias had committed another crime by planting landmines.

Libya's main civilian airport, lying on the southern edge of the capital on a key highway leading into its center, had been closed since being heavily damaged in 2014 clashes.

Warlord Haftar's forces, who launched an assault on the capital in April 2019, had captured the airport weeks later.

But their assault ground to a bloody stalemate on the edges of the city and in recent weeks, pro-GNA forces have won back a series of key locations.

Over the past two weeks, government-led forces have launched a major ground and air attacks, surrounding the airport area before the final assault, Qanunu said.

Pro-GNA forces were now "chasing Haftar's militias, who are fleeing (southwards) towards Gasr Ben Gashir" some 20 kilometers (13 miles) south of the capital, he said.

Haftar's forces did not immediately comment on the setback, but the loss of the airport follows a string of defeats for Haftar in recent weeks.
Libya's Army on Wednesday liberated two towns south of the capital Tripoli from militias loyal to warlord Khalifa Haftar, according to an official statement.

The army announced that civilians in the capital Tripoli had been largely rescued from militias affiliated with Haftar, the leader of illegitimate forces in the east of the country.

Mustafa al-Majai, a spokesman for the government's Burkan Al-Ghadab (Volcano of Rage) Operation, told Anadolu Agency that they expect the southern part of Tripoli to be fully liberated in the coming hours.

Libya's internationally recognized government has been under attack by Haftar's forces since April 2019.

In March, the Libyan government launched Operation Peace Storm to counter attacks on the capital and recently regained strategic locations including Al-Watiya airbase in a major blow to Haftar's forces.

Libya's new government was founded in 2015 under a U.N.-led agreement, but efforts for a long-term political settlement failed due to the military offensive by Haftar's forces.

The United Nations said its top envoy in Libya held talks Wednesday with a delegation from Libyan warlord Khalifa Haftar's forces to follow up on the agreement to resume cease-fire negotiations, calling it “a positive step.”

U.N. spokesman Stephane Dujarric said acting special representative Stephanie Williams would hold a similar video meeting with a delegation from the U.N.-supported government in the capital of Tripoli “in the coming days.”

Dujarric called the meetings with the two delegations “first steps ... in the right direction.”

“We will continue pushing and working with the parties ... to alleviate some of the suffering of the Libyan people,” he said. “To say that the situation on the ground, the violence and the political situation, is complex would be the understatement of the year.”

Dujarric said negotiations on a cease-fire agreement and technical arrangement will continue on the basis of a draft presented to both sides by Libya’s U.N. Mission on Feb. 23.

Warlord Haftar’s offensive is supported by France, Russia, Jordan, the United Arab Emirates and other key Arab countries. The government in Tripoli is backed by Turkey, Italy and Qatar.

Mercenaries, mainly from the Syria battlefield, are now fighting on both sides and complicating the already complex proxy war, according to U.N. experts.

U.S. and Libyan officials have accused Russia of deploying fighters from the Wagner Group in key battleground areas in Libya.

Last month, the U.S. military accused Russia of deploying 14 aircraft to eastern Libya to help Hafter’s forces, saying the move was part of Moscow’s longer term goal to establish a foothold in the region that could threaten NATO allies. Russia dismissed those claims as “stupidity” and has repeatedly denied playing any role in Libya’s fighting.

Dujarric said the United Nations reiterates its concern at “the persistent violations of the arms embargo on Libya” and calls on all countries to strictly enforce it.

The U.N. Mission in Libya announced the agreement on a new round of cease-fire talks late Monday, expressing hope they would “mark the beginning of calm on the ground” and allow the country’s war-scarred health system to cope with the coronavirus outbreak in the country.

The virus has infected at least 168 people in Libya, but testing is extremely limited. The impact of a large outbreak would likely be severe given the continued fighting and the state of the country’s health system.

France’s foreign ministry welcomed the agreement and said it “intends to do everything in its power to bring about an immediate resumption of discussions and the swift signing of a ceasefire agreement.”

“The worst scenario would be a Turkey-Russia deal imposing their conditions,” said a top French official, speaking anonymously under the French presidency’s customary practices. “What we seek is not the victory of one side over another, but political negotiations and resource sharing.”

The U.S. State Department said Wednesday it is “heartened” at the agreement and urged the parties “to relaunch U.N.-led political talks toward a solution as soon as possible.”

The secretary-general’s special representative for Libya, Ghassan Salame, resigned in March and diplomats say the U.S. has blocked two candidates to replace him. A replacement needs U.N. Security Council approval.

The State Department said Wednesday that the Trump administration wants the job split in two, with a U.N. special envoy “who has senior diplomatic clout and personal standing" focusing exclusively on negotiating a political solution and a separate special representative running the U.N. mission.

Diplomats, speaking on condition of anonymity because consultations have been private, say other Security Council members want one person to fill both roles.