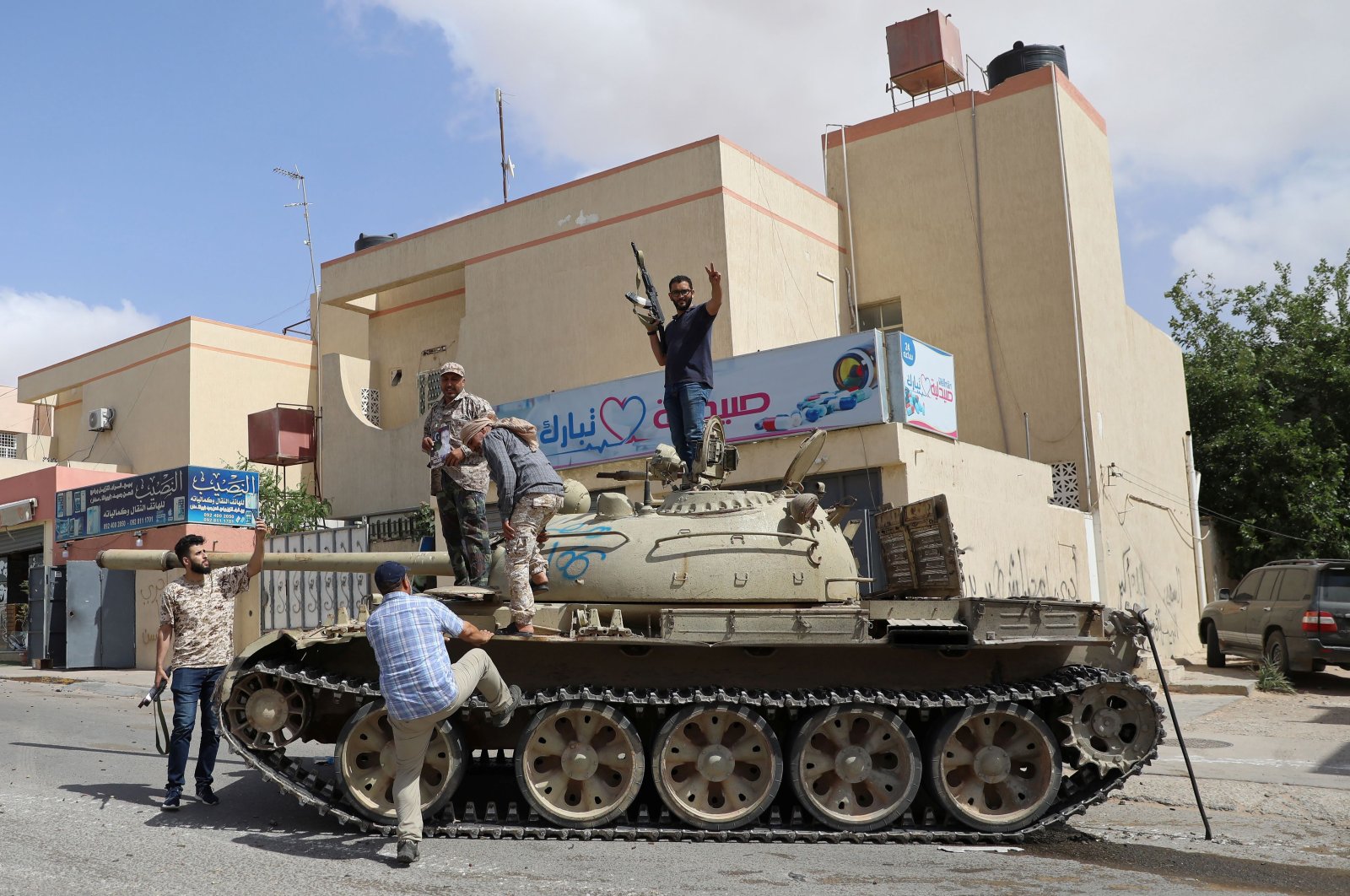 The Libyan Army seized a mine depot belonging to forces loyal to putschist Gen. Khalifa Haftar in Tarhuna and killed at least 10 fighters loyal to the warlord in Sirte, according to a statement Sunday, while Russia has accelerated efforts to hire Syrian mercenaries to fight for the putschist general.

The army seized the depot with dozens of mines and explosives, which militias used to explode mosques, roads and houses in Tripoli, according to the government's Burkan Al-Ghadab (Volcano of Rage) Operation.

At least 10 members of Haftar's militia were also killed Sunday in airstrikes by the Libyan Army, according to an official.

The army earlier Saturday launched a military operation, Path of Victory, to capture Sirte, Jufra and towns in Wadi Wishka, Buerat, Jarif and Qasr Abu Haid from Haftar's forces and it also liberated the Wadi Wishka area near the eastern city of Sirte.

The move came one day after it liberated the strategic city of Tarhuna – the last stronghold of Haftar in western Libya.

Sarraj met Lt. Gen. Mohammed al-Sharif, chief of staff of the army and military zone commandos, the government said in a statement.

They discussed issues including possible threats, the recent situation in the region and development of the coordinating mechanism between military zones.

The government launched Operation Peace Storm in March to counter attacks on the capital and recently regained strategic locations, including the al-Watiya air base and Tarhuna, which is viewed as a significant blow to Haftar's forces.

In the ongoing conflict, gaining control over Africa's largest crude reserves plays one of the main roles.

An official from Libya's Petroleum Facilities Guards announced Saturday it is awaiting orders to clear oil wells from Haftar's militias.

It managed to open the oil connection valve between the El-Sharara oil well in Ubari and the Millite oil complex, Ali az-Zib told the private Libya Panorama TV channel.

He said work at the El-Sharara and El-Feel oilfields would soon resume but did not specify an exact date for the reopening of the oilfields.

Petroleum Facilities Guards announced earlier Saturday it opened the al-Himade valve that delivered oil from the Sharara to the refinery in Zaviya by contacting residents of Zintan and the armed group that closed the valve.

El-Sharara and El-Feel oilfields were shut down earlier this year.

Libya holds Africa's largest crude reserves, but nine years of conflict and violence since the 2011 ouster of ruler Moammar Gadhafi have hobbled production and exports.

As the government forces' advance threatens Haftar's gains, a Russian drive to recruit Syrians to fight in Libya for Moscow ally Haftar accelerated in May when hundreds of mercenaries were signed up, according to five Syrian opposition sources and a regional source familiar with the matter.

The Russian Defense Ministry and the Wagner group did not respond to questions from Reuters.

Turkey, meanwhile, says it is providing military support to the internationally recognized Government of National Accord (GNA) based in Tripoli.

President Recep Tayyip Erdoğan said in February that fighters from the Turkey-backed Syrian National Army were in Libya, as well as Turkey's own military.

Russia has been a staunch ally of Syria's Bashar al-Assad. Moscow's involvement in Libya is an extension of its ambition to project influence in the Eastern Mediterranean, some experts say.

Egypt and the United Arab Emirates have also lent support to Haftar because they suspect the GNA of having ties to the Muslim Brotherhood, a group they strongly oppose.

Turkey began providing military support to the GNA in November after signing a military cooperation pact alongside a maritime demarcation deal, which gives Ankara exploration rights in the Mediterranean that Greece and others reject.

The involvement of Russia and Turkey on opposite sides of the Libyan conflict has echoes of the war in Syria, where they have also backed warring parties.

Wagner has up to 1,200 people deployed in Libya, according to a confidential U.N. report seen by Reuters in May. The Russian state has denied having forces in Libya.

When asked in January if the Wagner Group is fighting in Libya, Russian President Vladimir Putin said that if there are Russians in Libya, they are not representing the Russian state, nor are they paid by the state.

A spokesman for Haftar's militias denied it had recruited Syrian fighters. It has repeatedly highlighted the presence of Syrians fighting alongside its enemy.

U.S. officials said on May 7 they believed Russia was working with Assad to transfer militia fighters and equipment to Libya.

The Assad regime's information ministry did not respond to questions sent via email.

The internationally recognized government, the GNA, has been supplied with drones, air defenses and advisers from Turkey.

GNA deputy defense minister Saleh Namroush said its request for military support was in response to what he called "international meddling in Libya."

"Turkey is the only country that was willing to help us end the widescale civilian killing and destruction by the United Arab Emirates, Russia and others," he said.

New recruits to the Russian effort in support of Haftar included 300 from the Homs area, among them former Free Syrian Army fighters, according to one of the two senior opposition sources, and some 320 from the southwest, a third source said.

The pace of hiring increased as Libya's fighting intensified and the war in Syria died down, the regional source said.

According to the Syrian Observatory for Human Rights, which reports on the Syrian conflict using a network of sources on the ground, more than 900 Syrians were recruited by Russia to fight in Libya in May.

The fighters are trained at a base in Homs before going to Libya, according to the sources who cited salaries ranging from $1,000 to $2,000 a month.

The movement of fighters into Libya violates a U.N. arms embargo and the U.N.'s acting Libya envoy on May 19 urged the Security Council to stop "a massive influx of weaponry, equipment and mercenaries."

Many former Syrian opposition fighters stayed behind in areas recovered by Damascus and its Russian allies, signing agreements that required them to pledge loyalty to the state. But their lives remain tightly restricted and monitored by the authorities.

Haftar has been waging a campaign for over a year to try to capture the capital, Tripoli. The military tide has been reversed in recent weeks with his forces losing several strategic spots in western Libya. Haftar's offensive left more than 1,000 people dead. The government launched Operation Peace Storm in March to counter attacks on the capital Tripoli and recently regained strategic locations, including the al-Watiya air base and Tarhuna, which is viewed as a significant blow to Haftar's forces.

The Libyan Army captured Haftar's last major stronghold near Tripoli on Friday, capping the sudden collapse of his 14-month offensive on the capital.

On Thursday, Erdoğan vowed to ramp up Turkey's support for its ally in Libya to lock in the gains. On Saturday, Haftar was in Egypt, where President Abdel Fattah al-Sisi announced a new peace plan.

The retreat, reversing many of Haftar's gains from last year, extends the GNA's control of most of northwest Libya. Haftar and allied groups still control the east and much of the south, as well as most of Libya's oilfields, however.