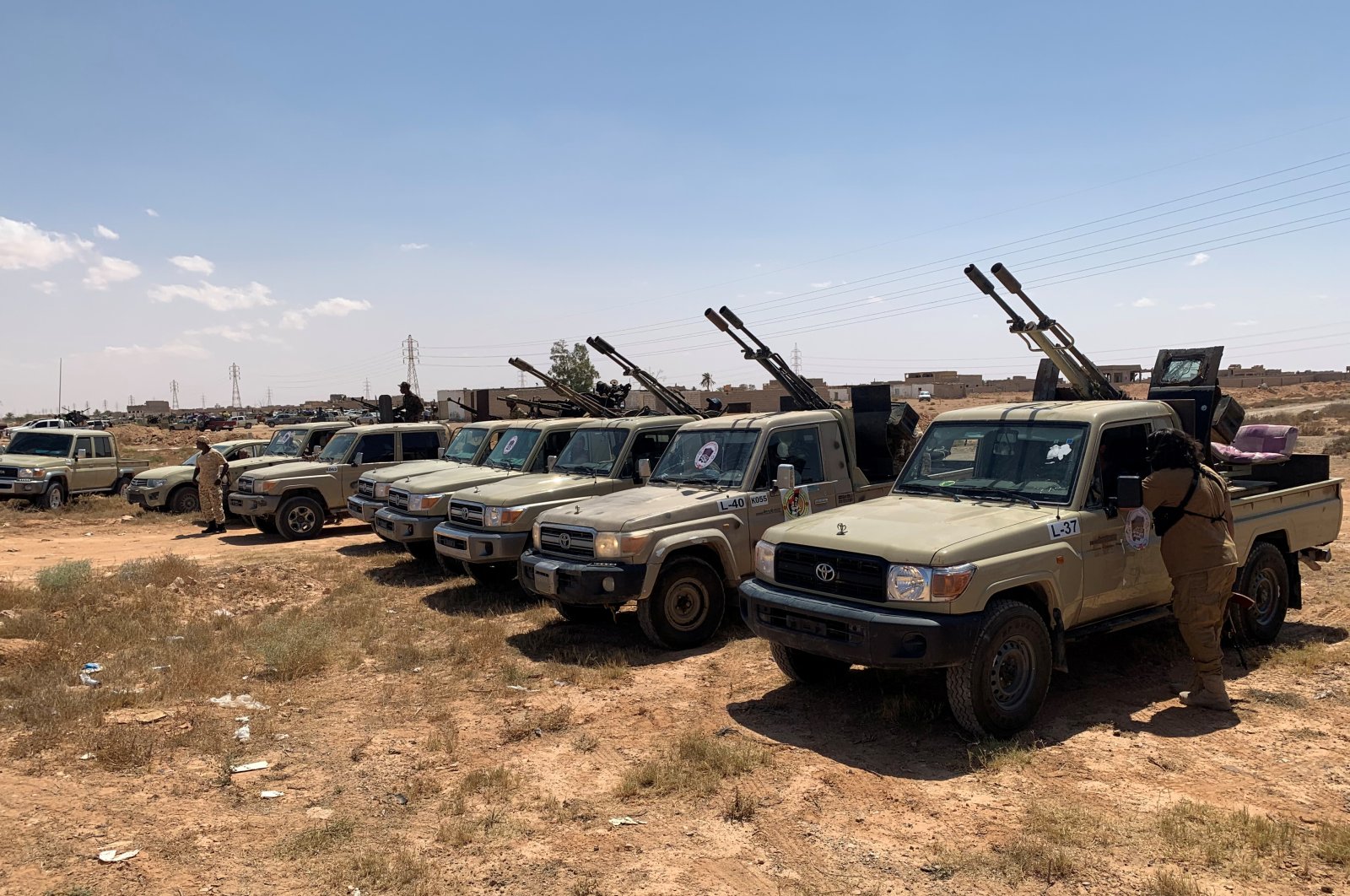 Troops loyal to Libya's internationally recognized government are seen in military vehicles as they prepare to head to Sirte, on the outskirts of Misrata, Libya, July 18, 2020. (Reuters Photo)
by DAILY SABAH WITH AA Jul 19, 2020 9:12 am
Edited By Şeyma Nazlı Gürbüz

The Libyan military dispatched vehicles to Sirte as part of efforts to capture the city, while Haftar's militias clashed with the guards at the oil facility in Brega

The Libyan Army dispatched several military vehicles to the west of Sirte province on Saturday, while the Libyan National Oil Corporation (NOC) said clashes took place at its facilities in the Brega region in eastern Sirte over the weekend, in two separate instances of escalation in the country's ongoing conflict.

A large number of military vehicles reached Abugrein as part of Operation Paths to Victory, which was launched to liberate the central city of Sirte and Jufra from putschist Gen. Khalifa Haftar's militias, according to army sources.

Meanwhile, the NOC said Saturday there were clashes between As-Saiqa – an armed group loyal to Haftar – and guards near oil facilities in the Gulf of Sirte in the eastern Brega region.

NOC highlighted the importance of removing Syrian mercenaries, Sudanese Janjaweed militias and Russia's paramilitary faction Wagner Group from oil facilities and urged a restructuring of the safety of oil fields under the umbrella of a professional, independent and disciplined security force.

In a written statement on July 17, the NOC also expressed deep concerns about "reports of the increasing likelihood of intensified military conflict, potentially extending to oil and gas facilities."

Libya, with the largest oil reserves in Africa, can produce 1.2 million barrels of crude oil per day. However, production has fallen below 100,000 barrels due to interruptions by pro-Haftar militias in the past six months.

Russian mercenaries fighting for putschist Gen. Khalifa Haftar have set booby traps in the central city of Sirte to prevent the Libyan Army from advancing into the area, according to GNA sources. Similar tactics were used by Haftar's militias in Tripoli and Tarhuna, which were recently recaptured by the Libyan Army from forces loyal to the warlord.

Meanwhile, a Turkish-made robot is being used to neutralize improvised explosive devices (IEDs) and ammunition in Tripoli, according to a statement by the Turkish Defense Ministry.

Libya has been split since 2014 between rival factions in Tripoli, home to the internationally recognized GNA and in the east, where warlord Haftar's Libyan National Army (LNA) holds sway.

This year Turkish backing has helped the GNA suddenly regain control of most of the northwest, after beating back a 14-month assault on the capital by the LNA, which is backed by the United Arab Emirates, Russia and Egypt.

The LNA still controls the east and south, including most major oil fields and export terminals