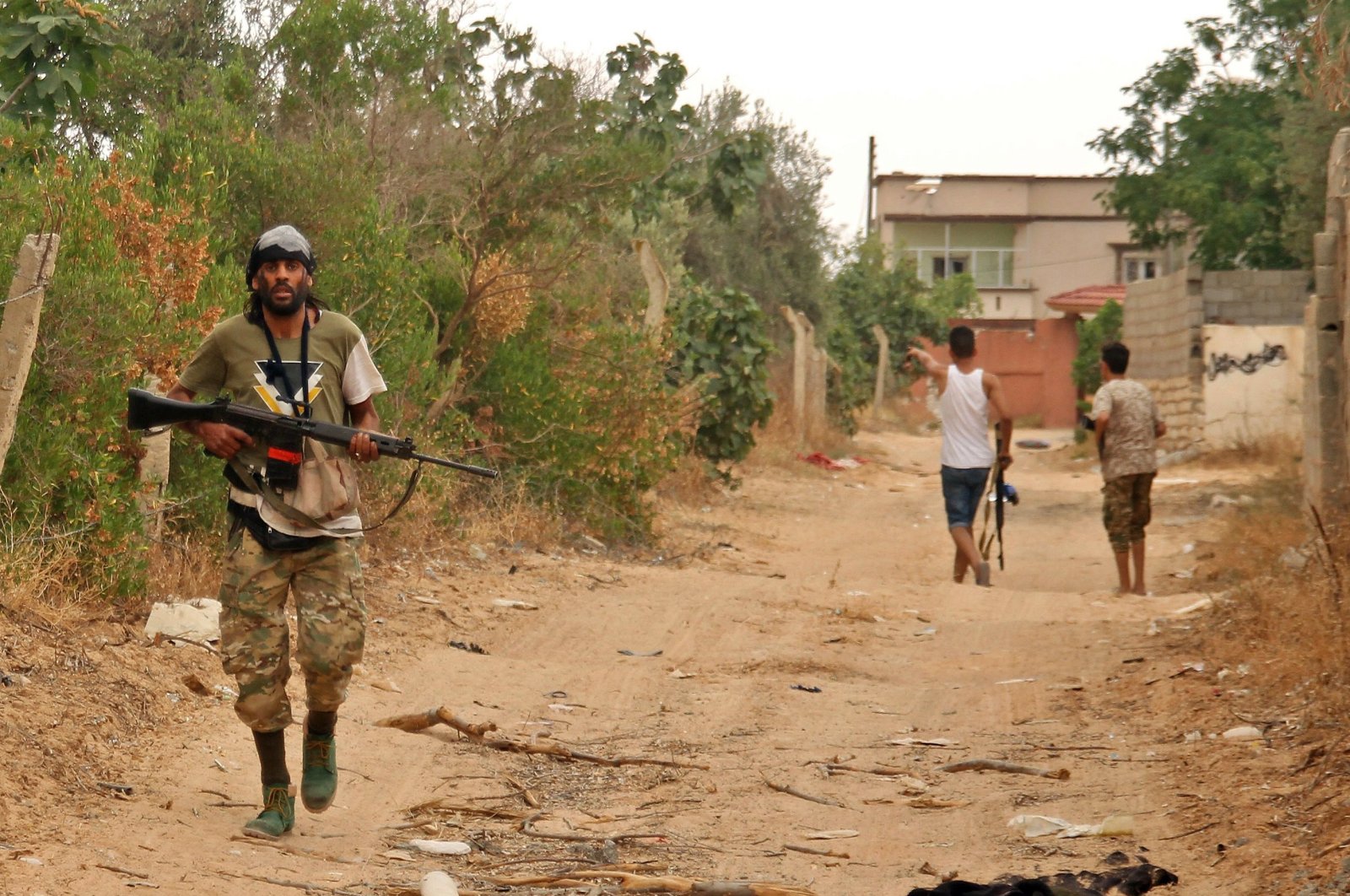 Fighters loyal to the internationally recognised Libyan Government of National Accord (GNA) are pictured during clashes with forces loyal to Khalifa Haftar in an area south of the Libyan capital Tripoli on June 1, 2020. (AFP Photo)
by DAILY SABAH WITH AGENCIES Jun 02, 2020 3:11 pm
RECOMMENDED

The Libyan Army on Tuesday said they destroyed seven military vehicles and killed 12 militia fighters loyal to eastern-based putschist Gen. Khalifa Haftar in the last 24 hours during airstrikes conducted in southern regions of the capital Tripoli.

Muhammad Qanunu, the military spokesperson of Libya's internationally recognized Government of National Accord (GNA), said Haftar militias and military vehicles were targeted in five separate airstrikes in the town of al-Asabaa, located in the south of Tripoli.

He added that an ammunition carrier and a United Arab Emirates (UAE)-made armored vehicle were also destroyed in addition to seven military vehicles.

The violent clashes between the government forces and Haftar forces continue around southern Tripoli, where Tripoli International Airport is located.

In recent weeks, the Libyan Army has made significant advances against the illegitimate Haftar forces and recaptured many areas in the south of the capital Tripoli.

Haftar forces have been battling since April last year to seize the capital Tripoli from the U.N.-recognized GNA in fighting that has left hundreds dead and forced 200,000 to flee their homes. The airport was invaded by Haftar forces on April 6, 2019.

Haftar's rapid advance on Tripoli last year stalled to a bloody stalemate on the edges of the capital. Haftar is supported by neighboring Egypt and the UAE as well as Russia.

Earlier in the day, the United Nations Support Mission in Libya (UNSMIL) said the country's warring parties had agreed to restart talks aimed at reaching a lasting cease-fire after a three-month suspension.

In a statement, the UNSMIL "welcomed" moves by the GNA and Haftar forces to accept "restarting negotiations on a cease-fire and the related security arrangements."

A military commission made up of five GNA loyalists and five Haftar delegates held talks in February, but the dialogue was suspended.

A January truce brokered by GNA-backer Turkey and key Haftar ally Russia has been repeatedly violated.

Neither side immediately commented on the U.N. statement.

The U.N. mission urged "states backing either of the belligerents to respect what was agreed at the Berlin conference" in late January, where world leaders committed to ending all foreign meddling in Libya and to uphold a much-violated arms embargo.

The UNSMIL also voiced hope that the resumption of talks by the joint military commission would be "the start of a truce on the ground and a humanitarian truce to provide the opportunity to reach a final cease-fire deal."